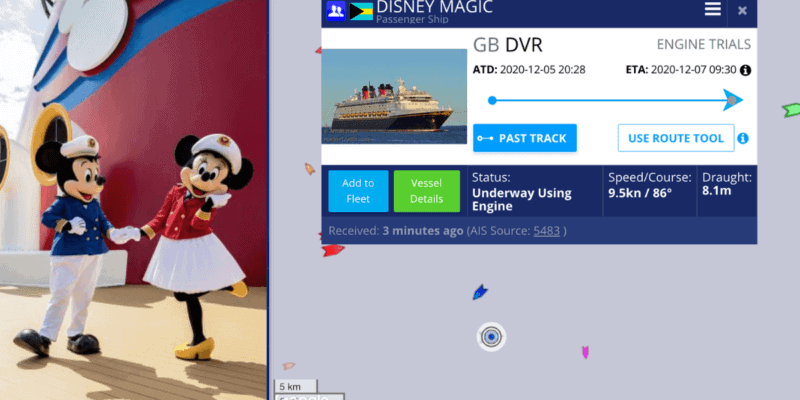 It appears that Disney Cruise Line’s last ship is preparing to begin its transatlantic voyage back to American waters.

Using the website MarineTraffic.com, we at Inside the Magic noticed the Disney Magic had left the docks in Dover and was undergoing engine trials in the English Channel.

At the time of this article’s publication, the Disney Magic was moving west, just northwest of Cherbourg clocking just over 5 knots. It is still unknown when she will begin her own return journey to join her sister ships.

The Disney Magic will be the last to leave Europe. We reported that the Disney Wonder was the first to return to Canaveral, and it is so far the only Disney Cruise Ship to return to Disney’s Private Island, Castaway Cay.

The Disney Fantasy recently became the second ship to return to Canaveral but unlike the Wonder it has yet to leave port for Castaway Cay or any other destination. The Disney Dream is currently in the midst of its transatlantic voyage and is expected to arrive on December 10.

Due to the new CDC regulations, it appears that Disney Cruise Line has a lot of work to do in order to earn its ships CDC-authorized ‘Conditional Sailing Certificates’ including successfully performing test sailings.

Related: How Could Disney Cruise Line Recover From 2020?

There is still no word on when normal sailings will resume, however, we have confirmation from the cruise line that it won’t be until mid-March or later. Those would-be passengers on canceled sailings have been offered full refunds or a cruise credit for a future sailing worth 125% of what they originally paid for.

Disney Cruise Line individually released a statement saying, “Our team at Disney Cruise Line remains focused on the health and well-being of our guests and team members. We continue to carefully review the guidance from the U.S. Centers for Disease Control and Prevention, and are working toward resuming operations.”

We at Inside the Magic will continue to monitor the Disney Cruise Line fleet and will update our readers as more information comes to light.

Did you know you can already book your Disney Cruise Line sailing for 2021 and 2022? Our friends at Academy Travel are standing by ready to help you plan your most magical voyage yet! Click here to get started and to receive your free, no-obligation quote today!

Are you excited to see Disney Cruise Line ships on the move? Have you ever sailed on the Disney Magic? Where does she rank among your favorite cruise ships? Let us know in the comments!

Comments Off on Is the Disney Magic Preparing to Return to Port Canaveral?