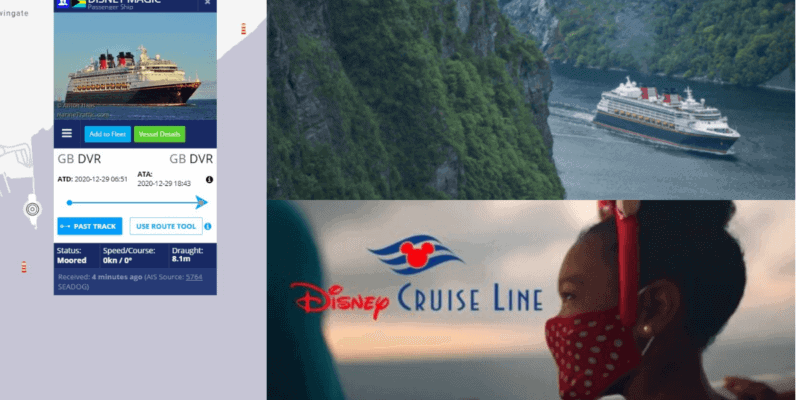 The Disney Dream, Disney Fantasy, and Disney Wonder are all back at Port Canaveral, FL, as Disney Cruise Line prepares to resume sailings from the U.S. within the new guidelines set by the Centers for Disease Control and Prevention (CDC). But what about the Disney Magic?

According to MarineTraffic.com, Disney’s first — and smallest — cruise ship is still docked across the pond in Dover, England. This reporter is starting to wonder why. Could Disney Cruise Line possibly be working to resume cruising in the Mediterranean, as well as the Caribbean?

Under normal circumstances, it would make sense for the Disney Magic to be preparing to take passengers back to Europe. This ship has been used in recent years for Disney’s Mediterranean and European voyages and the Disney Cruise Line website still shows the Magic is scheduled to set-off on 2021 adventures around the continent, beginning with a 7-night and a 6-night Mediterranean Cruise from Barcelona departing May 22 and May 29.

Dover, England is also a homeport for the Disney Magic, and the Disney Cruise Line website currently shows four sailings departing from there:

It is interesting that Disney still seems to be planning to offer these lengthy cruises, as multiple other sailings over 7-nights have already been canceled by the cruise operator through Summer 2021. It is possible that Disney is simply waiting to see what pandemic conditions are closer to July before canceling any of these specific cruiser offerings.

The Disney Magic is also the only cruise ship in the Disney Fleet to be stationed in Dover and running these routes at this time.

While Disney has been mum on the matter, it is very unlikely that European sailings will occur any time soon. Recently, the UK has followed France and other nations in falling back into national lockdowns. But, even before that, several cruise lines, including MSC Cruises SA, attempted to resume sailing during Summer 2020, but were forced to cut their trips short and suspend future sailings as COVID-19 outbreaks occurred onboard.

Disney Cruise Line’s entire fleet has not sailed since March 2002 and the company has remained extra cautious with a “Guest First” mentality, stating on its website:

“Our team at Disney Cruise Line remains focused on the health and well-being of our Guests and team members. We are continuing to carefully review the guidance from the U.S. Centers for Disease Control and Prevention and are working toward resuming operations.”

It should also be mentioned that, at this time, the CDC’s guidelines — which require, among other things, mask mandates, social distancing, and simulated cruises before earning a Conditional Sailing Certificate — only apply to ships sailing from U.S. ports and in U.S. waters.

It is, however, worth noting that Disney Cruise Line will still be subject to any sailing guidelines and restrictions in the European nations their ships sail from, including Barcelona, Spain, and Dover.

Again, there has been no official word from Disney on the matter, but the Disney Magic‘s continued presence in Dover could possibly signal Disney’s hope that it will be able to salvage at least this northern Europe section of its European portfolio given the fact that there are still just over seven months between the publication of this article and the first departure date. And, one has to wonder, if that is true, how would sailing in Europe differ from sailing in or from the U.S.?

We at Inside the Magic will continue to keep up with Disney Cruise Line, updating our readers as more information comes to light.

Did you know you can start planning your 2022 Disney Cruise right now? Our friends at Academy Travel are standing by ready to help you make this next voyage as magical as possible. Click here to learn more and to receive your free, no-obligation quote today!

Do you think Disney Cruise Line will start sailing again in Europe this year? Why or why not? Let us know in the comments!

Comments Off on The Disney Magic is Still in Europe – What Could This Mean for Disney Cruise Line?