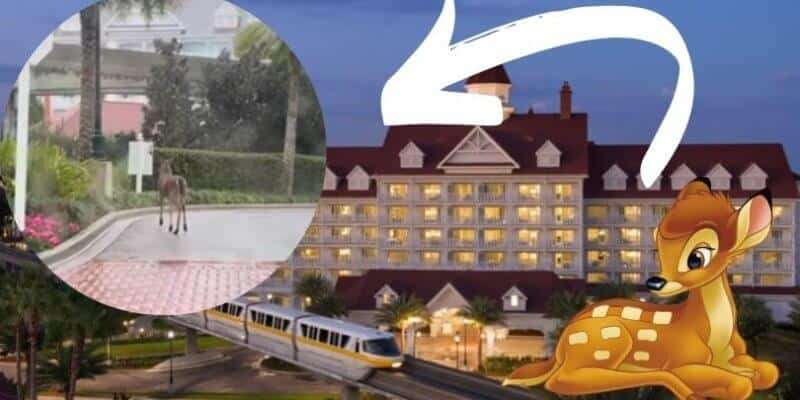 Due to the pandemic, Disney World is trying to reimagine and find new ways to bring magic to Guests — including the special appearances of certain Disney characters at hotels around the property. Goofy and Pluto have already been spotted at a few different hotels, and we can’t wait to see who else will soon show.

Well, one Disney Guest who was recently visiting Disney’s Grand Floridian Resort & Spa spotted a Disney character who hasn’t been seen there before (well, sort of).

A Reddit user and recent Walt Disney World Resort visitor took to the platform to post a video that said, “Found Bambi at the Grand Floridian!”

Of course, when watching the video you don’t see Bambi from the 1942 animated classic Bambi, but instead, you see a real-life deer roaming around the Disney World Resort hotel!

Though this isn’t a Disney character per se, it is still fun seeing real wildlife around Disney World property. Guests have spotted several animals around the theme parks and resorts including lizards, geckos, ducks, swans, pelicans, squirrels, and more.

Found Bambi at the Grand Floridian! from WaltDisneyWorld

If you are unfamiliar with Bambi, it is a classic animated film beloved by Disney fans of all ages. So, it’s no surprise that this Disney fan would think of the adorable character upon seeing a der at Disney World!

According to IMDB, the official Disney movie description reads:

The story of a young deer growing up in the forest. It’s spring, and all the animals of the forest are excited by the forest’s latest birth, a buck fawn his mother has named Bambi. The animals are more excited than usual as Bambi’s lineage means he will inherit the title of prince of the forest.

It is important to keep in mind that these animals are from the wildlife and are not properly trained. Therefore, you should not interact with them, feed them, or touch them.

Additionally, there are signs located throughout the theme parks and resorts that specifically state “Please do not feed the birds,” and “Do not feed the wildlife,” so all Guests should be advised to follow the rules and respect the animals that roam freely throughout Walt Disney World property.

As we previously mentioned, Goofy and Pluto have already been spotted at several Walt Disney World Resorts on property, including Disney’s Yacht and Beach Club!

Disney World also confirmed that new character experiences would be coming to the theme parks in 2021, however, we have not yet seen these new experiences and will keep you posted as soon as we get more information.

If you want to visit Walt Disney World in 2021, be sure to work with our friends over at Academy Travel, who will be with you every step of the way planning your magical vacation. Get started today!