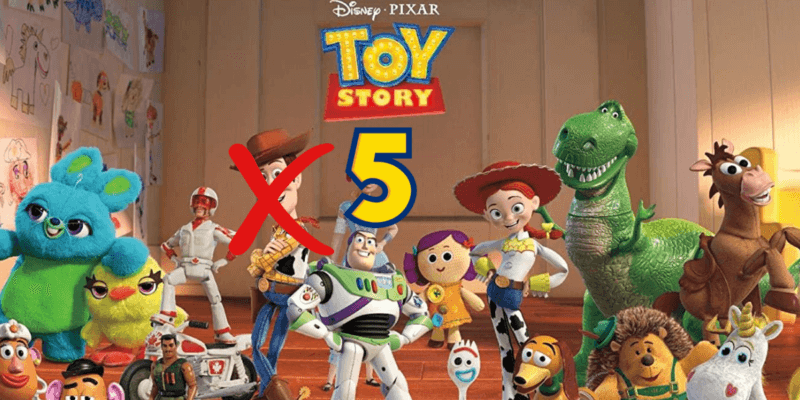 Pixar did Buzz Lightyear dirty in Toy Story 4. It’s for this reason that I believe the world’s greatest Space Ranger and Woody’s all-around amazing friend deserves the spotlight in a Buzz Lightyear movie.

Though your average Toy Story fan will likely agree that Toy Story 4 could’ve been far worse, many were disappointed to see how sidelined Buzz was. The film was Woody’s movie through and through.

So, I feel that a potential Toy Story 5 should not feature Woody at all. It should be an unapologetic Buzz Lightyear movie.

What fans weren’t so keen on is how Buzz took a backseat to new characters voiced by celebrities like Duke Caboom and Ducky and Bunny.

Ok, so why is Buzz so special?

Buzz Lightyear is essentially the second main character. The secondary protagonist, and the number-two toy, if you will. You go back to the first Toy Story, and though Woody is clearly the protagonist, it’s almost as much Buzz’s movie as it is the classic cowboy doll‘s.

The adventure continued in the second entry in the Toy Story franchise, and again, though Woody was clearly the focus, Buzz is still firmly in a central role. He leads Slinky and the rest of the toys in their mission to save Woody from Al’s Toy Barn, and he eventually comes face-to-face with both a second Buzz and The Evil Emperor Zurg.

In Toy Story 3, Buzz and Woody once again share the spotlight. Spanish Buzz was absolutely the addition to the Toy Story universe that we never knew we needed!

Each sequel only cemented Buzz Lightyear as one of the most essential fan-favourite characters.

Firstly, let’s address the elephant in the room; there is already a Buzz Lightyear movie; an animated film called Buzz Lightyear of Star Command: The Adventure Begins (which is still missing on Disney+, by the way).

But as much as I love this movie and series, this isn’t what we’re talking about. No, what I mean is a full 3-D animated, in theatres Toy Story movie that focuses on and stars Buzz Lightyear. But not just Buzz. The Potato Heads, Slinky, and all the rest of Andy’s toys would be along for the ride here.

That’s right, crazy though it may seem, my idea for a Buzz movie completely omits the franchise’s mascot. Woody is one of the best Pixar characters ever created, and Tom Hanks absolutely nails it.

However, he’s had his time to shine, and Toy Story 4 firmly closed the book on this character. In light of this, Woody would either be completely absent or would only feature in a minor cameo.

So what would this Buzz movie be about?

Buzz and co. are still Bonnie’s toys, so it’d have to be a story that doesn’t simply retread the beats of Toy Story 1-3.

I’d want to see a movie that takes a heck of a long time to come up with a compelling, fantastic premise. One that puts Tim Allen’s Buzz firmly at the centre. Maybe it could even tie into toy versions of the Star Command animated universe, and see Buzz try to convince “real-life” versions of XR, Booster, and Mira that they’re not really space rangers.

As we know from Toy Story 1 and 2, toys of this range are convinced that they’re space-people destined to defeat Zurg. Also, seeing Booster interact with the similarly cowardly Rex would be too perfect. Featuring all of these sci-fi themed characters also opens the door to create a sweet Star Wars parody.

Related: The Most Popular Disney Attraction Worldwide, According to Imagineering

But what’s the actual plot of this Buzz movie?

My suggestion is to mine from the well of in-production Toy Story content that never made it. Namely, the infamous first draft of Toy Story 3, which itself put Buzz front and centre.

In this story, the store recalls Buzz and sends him back to a factory in Taiwan.

There you have one heck of a compelling premise. Buzz could meet and interact with all kinds of defunct or broken action figures, and Pixar could address the dark question of how and when a toy becomes so broken that they lose their sentience.

Of course, this also opens the door for a lot of comedic scenes as well as the dark stuff. You could have an Emperor Zurg that is defunct and mistakenly thinks he’s a Buzz Lightyear figure instead. Zurg was always a highlight of Toy Story 2 for me, and I’d love to see Pixar lean into the Star Wars parody even heavier by really taking the mick out of Darth Vader.

This premise also forces the gang to find a new leader without Buzz or Woody around. Who would that be? Why Jessie, of course! Making Jessie the co-lead is a natural fit and a nice extension of Toy Story 4 where Woody gave her the sheriff badge, not to mention her own personal stake in finding Buzz.

Seeing Jessie and Bullseye lead Ham, Rex, Slinky, and all of the original gang plus a handful of favorites from Bonnie’s toys like Mr Pricklepants (AKA the best character ever made) would be fan service to the extreme, but it also makes total sense.

I’m also picturing an evil Woody in the style of the ventriloquist doll that Pixar originally designed him as in a dream sequence, but I think I’m getting ahead of myself.

That’s just my idea. But the point stands; Toy Story 5 should be well-and-truly a Buzz Lightyear movie.

Related: OpEd: Forky Gave Me a Change of Heart About “Toy Story 4”