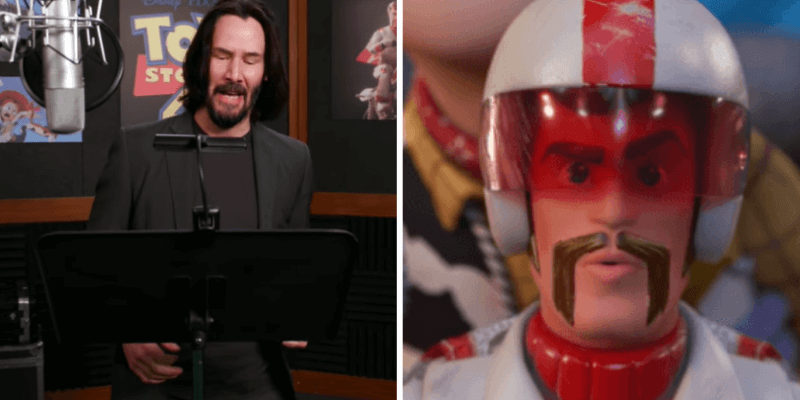 We couldn’t be more excited for “Toy Story 4” to hit theaters this month. So when we saw Chris Evans share this precious behind-the-scenes footage of Keanu Reeves recording for his role in the latest Pixar film, we knew we had to share it, too.

Last week, FabTV shared a behind-the-scenes video of several “Toy Story 4” actors recording for their roles in the film. And even though we’re excited to see these actors bring new and returning characters to life, we were most impressed and charmed by Keanu Reeves. In the upcoming film, Reeves plays the all-new character Duke Caboom, a Canadian daredevil action figure who “hails from a place where discontinued toys are sent.”

Duke Caboom suffers from low self-esteem and thinks he has let down his previous owner because he was unable to perform every trick his advertisements said he could. For years, he has been living in an antiques mall with Bo Peep, and even when Woody needs his help, he’s still so afraid to actually try the stunts he doesn’t think he can actually perform.

That sounds like a character who’s going to bring tears to our eyes once the film hits theaters, but we couldn’t think of anyone better than Reeves (a Canadian actor himself) to play Duke Caboom. Well apparently, Chris Evans agrees. The actor known for his role as Marvel’s Captain America shared the behind-the-scenes footage on Twitter, saying that if Disney-Pixar released two hours of the “Toy Story 4” actors’ recording sessions, he’d “probably still see it twice in theaters.” Take a look:

If they just released 2 hours of this and called it Toy Story 4, I’d probably still see it at least twice in the theaters. https://t.co/5vCNWB090l

The video shows behind-the-scenes footage of not only Keanu Reeves acting as his character Duke Kaboom, but also Tom Hanks (Woody), Tim Allen (Buzz Lightyear), Annie Potts (Bo Peep), Tony Hale (Forky), Christina Hendricks (Gabby Gabby), Keegan-Michael Key (Ducky), and Ally Maki (Giggle McDimples). You can even catch “Toy Story 4” director Josh Cooley as he pops in the studio with each actor to deliver some script and story insight to guide their performances.

Watch the video below to see the behind-the-scenes recording sessions for “Toy Story 4” (and skip to 8:12 for Reeves’s part).

Catch Keanu Reeves as Duke Caboom and the rest of your favorite characters in “Toy Story 4” in theaters June 21.

What do you think of Keanu Reeves’s role as Duke Caboom in “Toy Story 4”? Let us know in the comments!