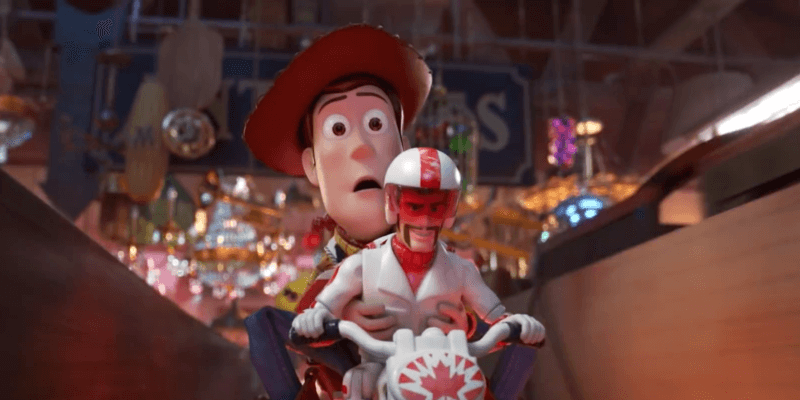 Fans have been waiting some time for “Toy Story 4” and it seems its release is even closer as Disney/Pixar just released the final trailer for the film, as it premieres in theaters in exactly one month from today. This final trailer gives us one last look at the upcoming film, including a special look at a new character to the franchise: Duke Caboom.

Not much is known about this new character other than the fact that he is being voiced by Keanu Reeves and that the animated action figure is “Canada’s greatest stunt man.”

In the trailer, Bo Peep introduces Duke to Woody and it seems he may be aiding Woody and the gang in finding their newest friend and Bonnie’s favorite toy: Forky.

During their initial meeting, the new friend can be seen hilariously posing in action poses while repeating the phrase, “oh yeah!”

This moves to a more serious scene in the trailer, which shows Woody, Bo Peep and Duke needing to reach a high shelf. In an attempt to reach it, the characters build a make-shift ramp, which Woody and Duke try to jump using Duke’s motorcycle. Will Caboom and Woody make the jump and continue to aid the toy friends in trying to save Forky? It seems we’ll have to wait till the film premieres in theaters to see!

Here is the official synopsis for the film:

Woody (voice of Tom Hanks) has always been confident about his place in the world, and that his priority is taking care of his kid, whether that’s Andy or Bonnie. So, when Bonnie’s beloved new craft-project-turned-toy, Forky (voice of Tony Hale), declares himself as “trash” and not a toy, Woody takes it upon himself to show Forky why he should embrace being a toy. But when Bonnie takes the whole gang on her family’s road trip excursion, Woody ends up on an unexpected detour that includes a reunion with his long-lost friend Bo Peep (voice of Annie Potts). After years of being on her own, Bo’s adventurous spirit and life on the road belie her delicate porcelain exterior. As Woody and Bo realize they’re worlds apart when it comes to life as a toy, they soon come to find that’s the least of their worries.

Are you going to see Toy Story 4 when it premieres in theaters? Let us know in the comments below!