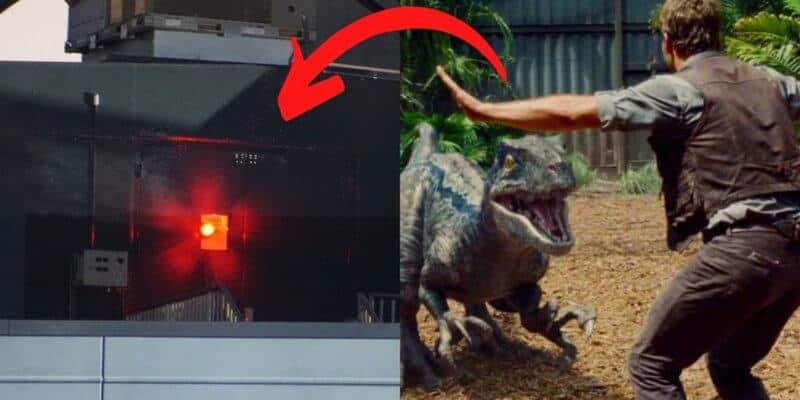 The VelociCoaster has been steadily progressing through testing and added theming, but now, the indoor show building of the ride are actively testing. Could this be the dark ride aspect of the attraction we are hoping for?

Since Universal Orlando’s reopening in June, Universal fans have been tracking the VelociCoaster progress. The attraction has gone through multiple full speed tests, has rock work forming around every track, and animatronics are being loaded into place.

From what we can see, the coaster has 2 indoor aspects that may be the loading platforms, but parkgoers, much like myself, are hoping that there will be a spectacle within, and now something is being tested inside of these buildings.

What do we know so far?

The VelociCoaster at Universal Islands of Adventure is going to bring the Jurassic World franchise into the Universal theme parks. We currently only have the Jurassic Park intellectual property taking home at Universal, so this new addition will mean a new group of characters!

In Universal Orlando Resort’s original announcement, it was noted that the VelociCoater would bring characters from the film including Chris Pratt’s ‘Owen’ to life. With the majority of the track happening outside, this possible holographic or animatronic technology is going to need to happen in a confined space that can control lighting — especially if we are talking holograms.

In order to do this, one of the show buildings must be included in the storytelling, and it is likely that we will get to experience more than just a lunch out of a dark room.

Aspects of the attraction are being tested

Thanks to our friends @Bioreconstruct on Twitter, we can see that one of the show buildings for VelociCoaster has been undergoing heavy testing for the past 2 nights.

Red lights have been observed past 2 nights blinking on roof of Jurassic World VelociCoaster. At least one of the lights is labeled with a Universal logo and “Testing In Progress – Do Not Enter”.

Red lights have been observed past 2 nights blinking on roof of Jurassic World VelociCoaster. At least one of the lights is labeled with a Universal logo and "Testing In Progress – Do Not Enter". pic.twitter.com/dmxwKZjJ3D

This door with the signage represented is attached to the largest show building that the roller coaster has to offer. Considering we are seeing lots of theming elements go into place, including small details like raptor eggs, it is very likely that this same detailing is happening indoors as well.

In the attraction teaser trailer, we can see we will be running with raptors, and the raptor footage seen is directly from the film. If we are expected to see Chris Pratt as he helps guide the Jurassic World story, it would be very exciting if raptor animatronics greeted us as soon as the ride starts to set the mood.

Only time will tell until Universal thrill-seekers can get a confirmation on what plot lines and technology we will get to see within the buildings of VelociCoaster, but until then, Inside the Magic has you covered each step of the way on the VelociCoaster progress.

Do you think we will get to see an elaborate scene inside VelociCoaster?

Comments Off on Testing Has Begun on ‘VelociCoaster’ Indoor Show Building – What’s Inside?