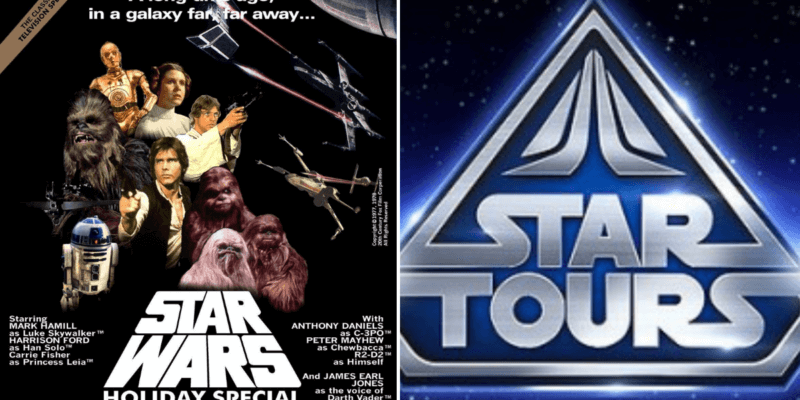 It’s the holiday season once again, which usually means the return of some very special holiday overlays to iconic Disney attractions. It’s at this time of year when the Haunted Mansion at Disneyland–if it were open–would transform into Haunted Mansion Holiday, “it’s a small world” dawns a festive look, and the Jungle Cruise at both Disneyland and Walt Disney World becomes the Jingle Cruise.

But what about the other attractions? Should any other rides have special seasonal experiences?

For some reason, I immediately thought about Star Wars, and the attractions in and around Star Wars: Galaxy’s Edge. With the upcoming release of LEGO Star Wars Holiday Special, I started to ask myself, “Should Disney incorporate the holiday season into Star Tours and Millennium Falcon: Smugglers Run”?

In my opinion, a holiday overlay makes complete sense for both attractions because each one revolves around an important part of the holiday season! Star Tours is travel. Holiday traffic. Smugglers Run is about transporting precious cargo (…kind of).

Just imagine “going home for the holidays” on Star Tours or even going so far as to actually incorporate the original Star Wars Holiday Special (1978) into the new storyline. This special television event came out the year after Star Wars: Episode IV – A New Hope (1977) hit theaters and changed the world of science fiction movies forever.

It is also the Star Wars show in which iconic bounty-hunter Boba Fett was first introduced, in animated form. The fan-favorite character has recently returned in The Mandalorian Season 2, so he’s having a moment again in the Star Wars community and could somehow be incorporated into a ride overlay.

Imagine being sent on a special holiday mission by Hondo as you board the ride. Personally, I can see him and Chewie making the “new kids” work the holiday shift or run off on some last-minute pickup. We probably need to pick up a special gift for one of his sketchy clients. I see so much potential for not just more holiday stuff, but to increase the level of Star Wars comedy as well.

Furthermore, the holiday season actually holds a special place in many Star Wars fans’ hearts. Life Day, the highest holiday on the Wookiee homeworld of Kashyyyk, takes place on November 17.

According to Disney’s Traveler’s Guide to Batuu,

“On Batuu, locals celebrate the ideals of peace, harmony and freedom for all beings no matter how different they may appear. Festive decor can be seen throughout Batuu and at the close of Life Day everyone gathers around the black spire to sing songs and spread good cheer to one another.”

If the entire themed land would be celebrating Life Day, it would then make sense to incorporate that holiday into these attractions as well.

The only problem is that holiday overlays cost a lot of time and money simply to install. We already see it on Haunted Mansion Holiday, “it’s a small world,” and Jingle Cruise. And at this point, it is all installation and refurbishment costs. Star Tours and Smugglers Run would take even more time and money to create the actual stories, develop the “virtual experience” ride films, and then do the proper testing before they can be shared with the public.

It is far too close to Christmas and far too expensive after all of the layoffs and project delays to even think about seeing any Star Wars holiday overlays this year. But looking to Christmas 2021 and beyond, should this be something to consider?

Do you think Star Tours and Smugglers Run should get special holiday overlays? Why or why not? Let us know in the comments!