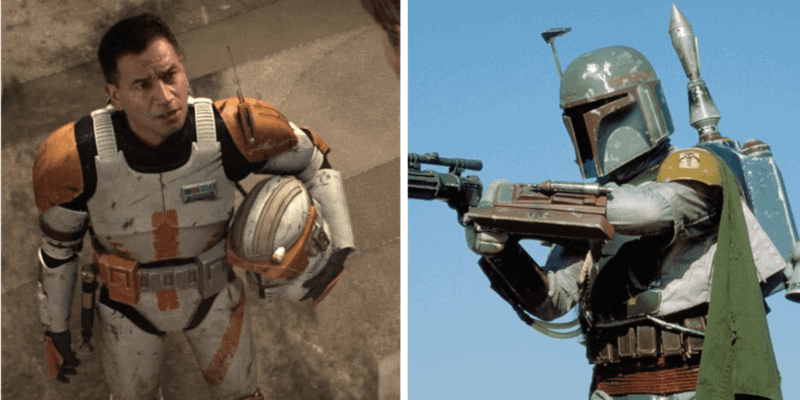 There have long been rumors that Temeura Morrison — who portrayed Jango Fett (Boba’s father) in Star Wars: Attack of the Clones (2002) — will appear as Boba Fett in Season 2 of The Mandalorian, which drops tomorrow on Disney+.

Related: ‘The Mandalorian’ Season 2 Will Include the Return of Boba Fett

Although many outlets, including GeekCulture, reported that Morrison’s agency added The Mandalorian to his list of credits — thereby more-or-less confirming his appearance as the bounty hunter — Disney and Lucasfilm have now taken things even one step further.

Lucasfilm — which has been owned by The Walt Disney Company since 2012 — filed a trademark for the name “Boba Fett” this week.

Related: ‘The Mandalorian’ Needs to Bring These Characters to Season Two

Unless Disney and Lucasfilm executives were planning to bring fan-favorite bounty hunter Boba Fett back in The Mandalorian Season 2, it seems highly unlikely that they would file a trademark for all of this upcoming merchandise.

An update to the 2010 one. Interesting. pic.twitter.com/nxYcxEIxgg

Related: 10 Things to Read, Watch, and Play Before ‘The Mandalorian’ S2

While we are still not certain what Boba Fett’s role will be when he encounters Din Djarin (Pedro Pascal) and The Child in Season 2 of The Mandalorian — or whether he will become embroiled in the Darksaber storyline involving Moff Gideon (Giancarlo Esposito) and Bo-Katan Kryze (Katee Sackhoff) — this new trademark application certain makes it seem even more likely that The Empire Strikes Back’s notorious bounty hunter will be making an appearance this season.

Showrunners Jon Favreau and Dave Filoni are famously tightlipped about their series, so we’ll just have to wait until tomorrow to start uncovering everything the galaxy has in-store for us this season.

How do you think Boba Fett is going to play into everything going on in Disney’s streaming service sensation, The Mandalorian, this season?

Comments Off on Could This Be Confirmation That Boba Fett Will Appear in ‘The Mandalorian’?