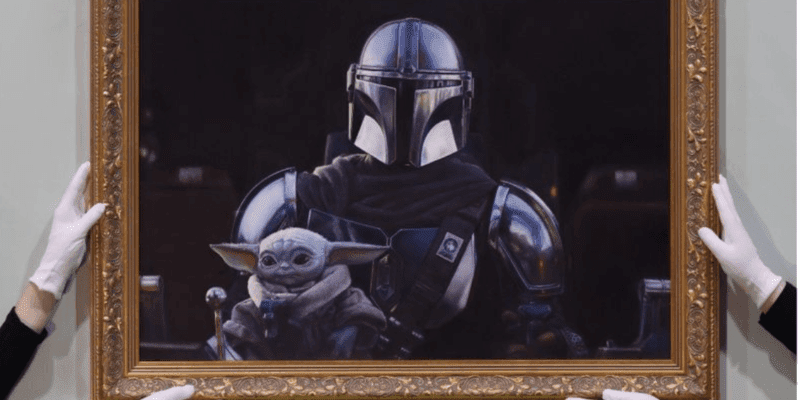 If there’s anything The Walt Disney Company knows how to do, it’s market the heck out of their products. They may have just one-upped themselves with today’s unveiling of a portrait featuring Din Djarin and The Child in a new collaboration with London’s National Portrait Gallery.

Variety shared a Tweet about the new painting with the simple caption:

A portrait of #BabyYoda has been unveiled at The Unit Gallery in London https://t.co/fiT8HFlScZ

Titled “The Mandalorian and the Child,” the portrait, produced in collaboration with the National Portrait Gallery, has been unveiled at The Unit gallery in London. The Child is popularly referred to as Baby Yoda by fans of the series.

The portrait’s unveiling from Oct. 30-31 will coincide with the season 2 premiere of “The Mandalorian,” which streams on Disney Plus from Oct. 30.

The 3-feet-by-2-feet oil portrait will hang alongside some of the National Portrait Gallery’s own collection of portraits of familiar faces from the “Star Wars” galaxy, including Sir Alec Guinness, Thandie Newton, Felicity Jones, Ben Morris, Riz Ahmed and Gareth Edwards. The display will also include original concept art from “The Mandalorian,” created by artists Doug Chiang, John Park and Christian Alzman.

We can’t get over the fact that this painting — at first glance — actually looks like it belongs alongside artwork featuring British royals and historical icons. The technique the artists used fits in wonderfully.

If you’re looking forward to Season 2 of The Mandalorian as much as we are, you don’t have long to wait. The show will be available to stream on Disney+ starting tomorrow — and you can even take advantage of the new Disney+ sharing and GroupWatch features to watch the first episode with your family and friends.

While we don’t know too much about what to expect this season — showrunner Jon Favreau and his team are famously tight-lipped– Star Wars fans have received confirmation that fan-favorite animated characters from Star Wars: The Clone Wars and Star Wars Rebels are set to appear in live-action for the very first time.

Notably, Ahsoka Tano (Rosario Dawson) and Bo-Katan Kryze (Katee Sackhoff) will appear. We can only assume that Kryze’s storyline will be intrinsically tied to the Darksaber — she received it from Sabine Wren.

The infamous black-bladed lightsaber was wielded by Moff Gideon (Giancarlo Esposito) in the Season 1 finale of The Mandalorian. We don’t know yet exactly how Gideon came into possession of the dangerous weapon, but some fans believe he stole it from Kryze during the Siege of Mandalore.

Are you going to be tuning into The Mandalorian Season 2 tomorrow? What do you think about this Baby Yoda portrait marketing campaign?