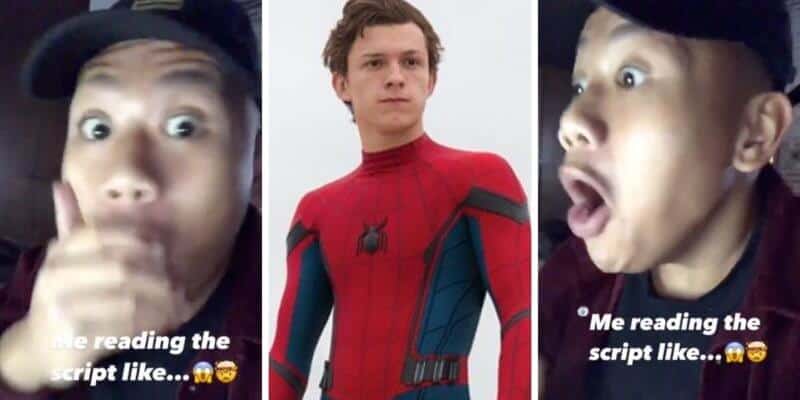 Marvel Cinematic Universe fans are anxiously awaiting the release of the next Spider-Man film, which is set to debut at the end of 2021. Though not much information has been released surrounding the upcoming movie, the cast continues to get fans excited.

It wasn’t long ago, Holland shared that production has begun on the upcoming Marvel film, which will start shooting in Atlanta.

In addition, Holland just recently shared a behind-the-scenes video of him in his costume to get followers pumped up, and now, another actor has taken to social media sharing his reaction to the script.

Jacob Batalon, who portrays Peter Parker’s best friend, Ned, in the Spider-Man films, recently took to his Instagram to post a video of his reaction to reading the script. You can clearly see in the video, Batalon is extremely surprised by one specific moment in one scene of the upcoming film.

Thankfully, there are no spoilers in the video, which has been reshared by @DRMovieNews1 on Twitter, but it does appear that the script for Spider-Man 3 has some shocking surprises that not even the actors expected! Check it out for yourself here:

Jacob Batalon reacts to the script for ‘Spider-Man 3’ (2021). How do you NOT get stoked watching this!? pic.twitter.com/RMa4Vlo6Ky

Unfortunately, we don’t have much information regarding the upcoming Spider-Man film, including a title, which is why it is currently being referred to as Spider-Man 3. However, we do know that Jamie Foxx, will be returning to the MCU to play Electro, who he previously played in The Amazing Spider-Man 2, which fans are extremely excited about.

Inside the Magic will continue to update you as we get information regarding the upcoming Marvel Cinematic Universe film.

Spider-Man 3 is set to release in theaters on December 17, 2021. Are you excited about the upcoming MCU film? Let us know in the comments below.