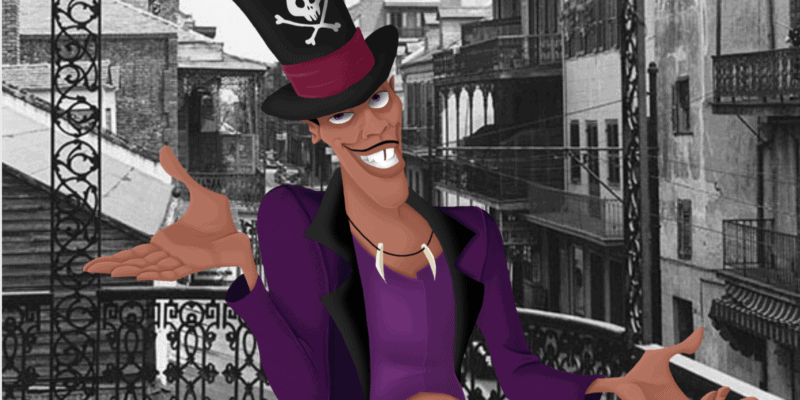 When we first met Dr. Facilier in The Princess and the Frog (2009), his story was — and remains — a bit ambiguous.

As the Disney Fandom Wiki shares, few details about Dr. Facilier’s backstory are known at this time:

Facilier’s past is mostly unknown, though he mentions being a descendant of royalty through his mother (whose severed, shrunken head he keeps in his emporium). His motivations toward taking over New Orleans were briefly implied to be a result of a poor upbringing, where the wealthy either treated him with disrespect or ignored him altogether.

At some point in time, through unknown circumstances, Facilier encountered a group of dark loa and formed an alliance with them, granting himself power over black magic…

After The Princess and the Frog released, Dr. Facilier quickly skyrocketed to popularity, quickly becoming the first black member of the official Disney Villains group.

Both the Descendants franchise (Jamal Sims) and ABC’s popular Once Upon a Time series (Daniel Francis) have shared their own live-action takes on Dr. Facilier, but these versions neither one provide Disney fans with the villain’s complete backstory — and they are specifically designed to fit into those franchises’ story arcs.

Now, it’s time for Dr. Facilier to be Disney’s next official villain movie. Here’s why.

The setting would be incredible.

Dr. Facilier, presumably, is in his mid-30s to early 40s when he meets Tiana, Prince Naveeen, and the rest of The Princess and the Frog cast. The Walt Disney Animation Studios film — which returned to the classic Disney Princess animation style — is set in the mid-1920s in New Orleans.

This means that a Facilier backstory film would likely take place in turn-of-the-century Louisiana — a fascinating setting any way you slice it. History fans would undoubtedly love seeing the French Quarter and the Garden District in the early 1900s, while music lovers would enjoy seeing Disney characters experience the birth of the New Orleans Jazz movement on Bourbon Street.

Since we don’t know where Dr. Facilier is originally from, we could even get a glimpse of the turn-of-the-century Caribbean if he did, in fact, immigrate from Jamaica or another island as some fans have suggested.

Furthermore, Creole culture in early-1900s New Orleans was vibrant and enthralling, making for the perfect setting for a live-action Disney film.

In recent years, Disney has been exploring live-action remakes and backstories more than ever before. Starting with Maleficent (2014) and Cinderella (2015), live-action films have been Walt Disney Studios’ bread and butter ever since.

Maleficent, which featured Angelina Jolie in the title role, was Disney’s first foray into villain backstories. That franchise continued with Maleficent: Mistress of Evil (2019) and another villain history, Cruella, starring Emma Stone, is set to release next year.

While many have called for an Ursula backstory, giving fans a glimpse into how Dr. Facilier came to become the voodoo doctor we all love to hate is a more intriguing tale for Disney to explore — Ursula’s history has already been delved into previously and Melissa McCarthy is set to play the Sea Witch in the upcoming live-action The Little Mermaid remake.

At this time, one of The Walt Disney Company’s biggest goals is inclusion in all sectors — this includes new Cast Member training and the upcoming Princess and the Frog Splash Mountain re-theme at both Disneyland Resort and Walt Disney World Resort.

Exploring Dr. Facilier’s backstory in the near future would not only align with the timing of the upcoming Splash Mountain project — which does not yet have an official start date — but would fit into Disney’s other inclusion initiatives since he is a character with African heritage.

If you’re not sold yet, just imagine this final scene: Dr. Facilier sees Prince Naveen dancing in the streets of 1920s New Orleans for the very first time — and, cue credits.

What do you think? Should Dr. Facilier be the subject of Disney’s next live-action villain backstory? Who do you think should play him — some online speculation mentions Andre 3000!