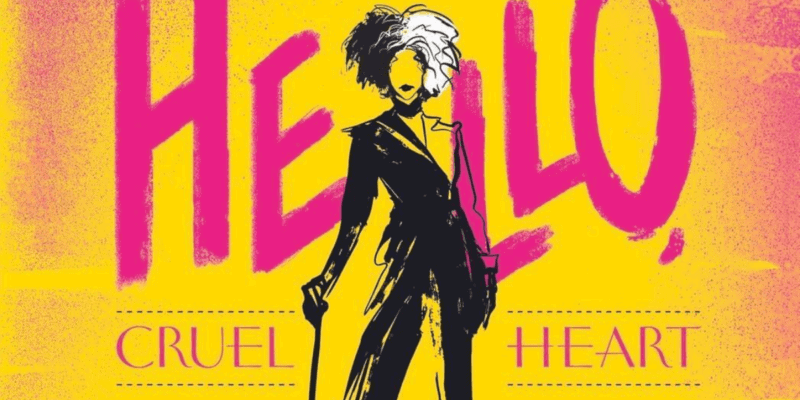 Before Emma Stone brings her to life in one of the most anticipated Disney prequels in the movie lineup,  Cruella De Vil fans will get a look at her younger self in a book from Disney Publishing called Hello, Cruel Heart.

New York Times bestselling author Maureen Johnson, who is writing the book, sat down with The Hollywood Reporter to share a little bit about what future readers should expect. And it turns out to be a character much younger than this writer was anticipating.

“Before there was Cruella, there was Estella,” Johnson explained. “In Hello, Cruel Heart, we meet a sixteen-year-old Estrella in London, living in a bombed-out place called the Lair with Jasper and Horace, stealing to make ends meet, and trying to establish herself as a fashion designer.

“In the summer of 1967, London was the coolest place in the entire world. It was called Swinging London, and everything was happening at once—especially music and fashion. Estella meets a pair of rich siblings, Magda and Richard, who sweep Estella into London’s most fashionable set. Through them, she meets Peter, the guitarist, and songwriter for the Electric Teacup, an up and coming band. Estella will go through a whirlwind romance and an intense social experience that turns her toward her eventual emergence as Cruella.”

Placing the plot of this novel in the 60s means that it will take place around 10 years before the Disney cinematic prequel to 101 Dalmations which is already expected to be taking place at the height of the late 70’s punk rock period.

Johnson also explained that music plays a significant part in both the story and its creation:

I used a lot of music in the creation of this book! Maybe the biggest album of the period it covers—and certainly one of the most famous of all time—is Sergeant Pepper’s Lonely Hearts Club Band by the Beatles. If you’ve never heard it, well, now is a good time. You can also see a bit of the recording of one of the most famous tracks, “A Day in the Life.” They turned this recording into a party, and you can see many of the people mentioned in the book.

I was thinking about “Itchycoo Park” by The Small Faces when I was making the Electric Teacup. This is one of my favorite songs of all time. I first heard it when I went to London after college and I was working there during a brutally hot but amazing summer.

I mention the Rolling Stones a lot, including Mick and Marianne. Mick Jagger and Marianne Faithful were a couple, and they lived at 48 Cheyne Walk. I made Magda and Richard their neighbors. There are many great Rolling Stones songs I could mention here, but I think I’m going to go with “We Love You.” Mick Jagger and Keith Richards were famously arrested and put on trial in 1967, and they made this song in response to those events and their release. Marianne appears in this — I love Marianne. The guy who appears to be falling asleep all the time in this is Brian Jones, who founded the Rolling Stones. I based Peter’s — the guitarist/songwriter for Electric Teacup and Estella’s love interest in the book — ability to play any instrument he picks up on Brian, who had that talent.

There are so many incredible songs I could add. A few more, like, “Waterloo Sunset” by the Kinks,” A Whiter Shade of Pale” by Procol Harum, or “Purple Haze” by Jimi Hendrix.

Sounds like a book that needs a reading playlist, and one has to wonder if this book will help provide the backstory for Stone’s portrayal of this ferocious fashionista.

Johnson concluded the interview by explaining why she believes that Cruella is a fantastic character for Young Adult fiction. and readers will gravitate and even root for her.

Cruella, or Estella, as she is called in the book, wants to make something of herself. She has a passion. She’s obsessed. She falls in love with a musician and gets swept up in fandom and frenzy. She’s in the middle of one of the most exciting cities in the world, at an incredibly exciting time. But she’s also not sure who her friends are. Love, music, fame, money, and friendship—she goes through it all.

Are you excited for more Cruella De Vil stories? Let us know in the comments!