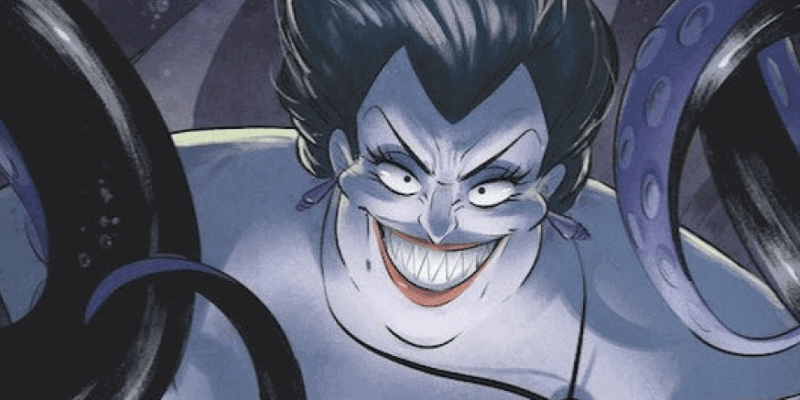 Dark Horse Comics has announced a perfectly sinister new comic book mini-series featuring Ursula the Sea Witch from The Little Mermaid. Ursula is a fan-favorite Disney villain and this new prequel comic series will give readers a chance to learn more about her origins.

Officially titled “Disney Villains: Ursula and the Seven Seas,” the story will explore the time before Ursula met Ariel, when she was one of seven witches who each ruled one of the Seven Seas with an iron fist. When one of Ursula’s sister witches is mysteriously stripped of her powers, it’s up to Ursula to uncover the culprit.

This indicates that there might be more to King Triton’s nemesis than meets the eye in Disney’s animated The Little Mermaid film. The mini-series, which is set to debut June 24, 2020, is being written by Sherri L. Smith. Smith said, “Remember, for every witch you are told about, there’s a goddess you’ve forgotten. What a treat it is to give Disney’s most decadent villain her due!”

Illustrator Gabriele Bagnoli also chimed in, stating, “I always loved Ursula’s character because I thought she was really evil and dreadful…It has also been very interesting trying to characterize her sister witches, and I’ve tried to make them unique and special.”

The cover of the first issue of  “Disney Villains: Ursula and the Seven Seas” has been revealed and we’re obsessed with the style. We love the details and that Ursula is wearing the iconic shell necklace she later uses to steal Ariel’s voice.

Villain backstories are always fun and this look at Ursula has the potential to be especially intriguing. The premise begs all kinds of questions: Will we learn she wasn’t always evil? Did something happen during her search for the truth that changed her?

Are you looking forward to this look at Ursula’s origins? Let us know in the comments!