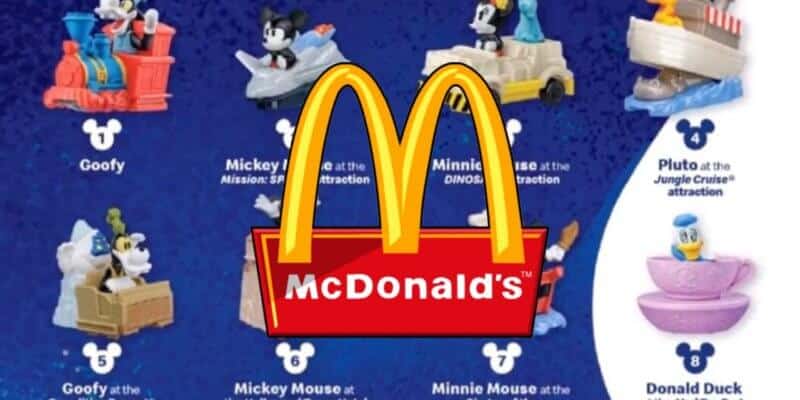 We recently reported of McDonalds releasing a Disney World inspired toy line with classic Disney attractions from Goofy riding Mickey & Minnie’s Runaway Railway from Disney’s Hollywood Studios to Pluto acting like our Skipper on the Jungle Cruise attraction at Magic Kingdom. Disney and McDonald’s collaborations are usually awesome, but the collectability and nostalgia on this release it targeting not just kids, but many adults as well.

Although rumors indicated that the McDonald’s Happy Meals would not be filled with the magic of Disney until November 17th, we now know that the release dropped a day early — so you may want to head to a McDonald’s drive-thru.

Thanks to Disney small shop owner Chad (@hundredacrehoodco), we are able to see that Disney fans can begin collecting these figurines.

If you want to head to McDonald’s today to begin collecting the Disney toys, we know that the Bronson Memorial Parkway location in Kissimmee does have them in stock and is handing them out to Guests. So far we do not know if locations outside of the United States will have these toys in stock.

Considering how popular these toys already are prior to their drop, tied together with the cult following that many McDonald Disney collectibles carry, starting early is not a bad idea for those who want to collect all 10 toys.

If you want a full list of what Disney toys you need to collect they are:

Plus, if you go soon, you can start off your Disney attraction collection with 2 figurines! On the McDonalds app, McDonald’s is currently promoting buy one Happy Meal, get one free, and we love a good BOGO (especially when it involves chicken nuggies — Baby Yoda fans, help me out here).

Do you want to collect all 10 of the McDonald Disney Attraction Happy Meal toys?