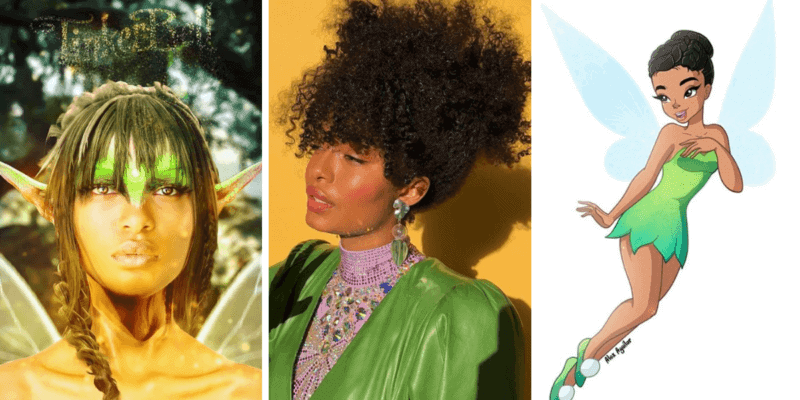 Just a couple of weeks ago, we found out that ABC’s Black-ish and Grown-ish star Yara Shahidi was cast as Tinker Bell in the new live-action version of Peter Pan, Disney’s Peter Pan and Wendy.

Following the decision to cast her ABC co-star Halle Bailey as the first Black Ariel in the upcoming live-action Little Mermaid movie, Disney cast Yara Shahidi as Tinker Bell. Although many fans of the animated Disney classic didn’t agree with the casting decision, the announcement was still met with an outpouring of love for Yara as well as Disney’s choice to cast her in such an iconic role. We’re excited for the story of Peter Pan to be told in a new way, and we can’t wait to fly off to Neverland!

We love sharing fan art on Inside the Magic and after seeing so much artwork showing Yara Shahidi as Tinker Bell, we thought we would share some artist renditions of what Yara could look like as Tink in the new movie.

This artist’s rendition of Yara Shahidi looks pretty believable! We aren’t sure how fairies like Tink will look in the new live-action Peter Pan and Wendy movie, but the digital illustration below is definitely intriguing.

@yarashahidi as Tinkerbell??‍♀️ _____ It has been announced that the @grownish star will play Tinkerbell in @disneystudios new Peter Pan movie! So i wanted to switch it up from the superheroes today and dive into the fantasy realm and make render of what Yara may look like as the fairy sidekick. What do you think? #yayornay?? #yarashahidi #tinkerbell #disney #peterpan #fanart #fanarts #disneygram #bepositive #alwaysapex

Back when the casting announcement was first made, Yara actually reposted some fan art on her own Instagram to thank everyone for their support. This illustration is done in more of a Disney style and shows how Yara could look as the fictional fairy Tinker Bell in animated form.

Thank you for all of the love. It, truly, means so much to me ???‍♂️ I’m excited for this next adventure! Artist: @alexcollectsofficial

The illustration below shows Yara as Tink posing the way Tink does when she stands on the mirror in the Darling nursery. But if you’re a fan of the Legend of Zelda games, you may agree that this version of the fairy looks like she could be from Hyrule!

We love that this fan art shows Tink’s playful side!

Disney is all @yarashahidi is the new Tinkerbell now, those are the rules and I kinda feel like a little bit of 2020 was put back together again. We are looking forward to Peter Pan! . . . #tinkerbell #yarashahidi #disneysketch #fanart #peterpan #yourmomisanartist #katehamart #laughingtinkerbell #blackish #cartoonoftheday

Nikkolas Smith — a former Disney Imagineer who created the beautiful Chadwick Boseman mural at Downtown Disney — shared his own sketch of Yara as Tink, and we love it. Nikkolas even said he’d illustrate a new Tinker Bell children’s book, if he could.

Sign me up for illustrating a new Tinkerbell children's book ???✨and yes there will be baby hair? So proud of you @yarashahidi ! ???✨ #TinkTink #SundaySketch #Tinkerbell #Yara #PixieDust #Disney

This style reminds us of the Tinker Bell/Disney Fairies film franchise, and we love all of the details in her fairy wings!

And of course, we love a classic Tink pose:

Which Yara Shahidi Tinker Bell fan art is your favorite? Are you excited to see Yara star as iconic Disney fairy in the new live-action Peter Pan and Wendy film? Let us know in the comments!