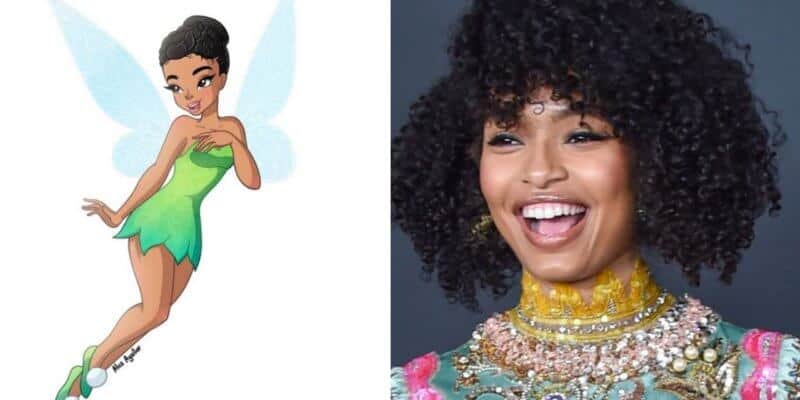 It was just yesterday that we discovered Disney had cast their Tinker Bell for the latest live-action remake: Peter Pan and Wendy. Yara Shahidi of ABC’s Grown-ish and Black-ish. Yara will be joining the star-studded cast of Jude Law (reportedly Captain Hook), Alexander Molony (Peter) and Ever Anderson (Wendy).

As soon as Deadline broke the news, the internet broke out with a wave of excitement. Yara Shahidi playing Tink has been heavily discussed the past 24-hours and many fans are loving it. Not only are thousands of Disney fans taking to social media to congratulate the actress on her booking — but stars are posting as well!

Halle Bailey, who has been cast as Disney’s live-action Ariel in The Little Mermaid took to her Instagram story to congratulate Yara!

Yara originally posted about Halle’s casting last year when the news broke that she would be playing Ariel. Yara said:

Casting Halle as Ariel in The Little Mermaid was a hugely progressive — and, in my opinion, fantastic — casting decision on Disney’s part. Casting a Black actress in a princess-type role that is typically animated as white has clearly only paved the way more more diverse and inclusive casting. Plus, I am not sure you can find someone more pixie-looking than Yara Shahidi, am I right?

The outpour of love from Disney fans left Yara speechless. She posted a a fan’s artwork of herself as the classic Tinker Bell and stated:

Thank you for all of the love. It, truly, means so much to me ?I’m excited for this next adventure!

Thank you for all of the love. It, truly, means so much to me ???‍♂️ I’m excited for this next adventure! Artist: @alexcollectsofficial

The comments are only growing from celebrities like Sza to Lilly Collins congratulating her once again on the booking. It will be exciting to see Yara take on the sassy little pixie who craves attention at any turn. That is, if Disney decides to keep Tinker Bell that way!

Are you excited to see Yara Shahidi as Tinker Bell? Let us know!