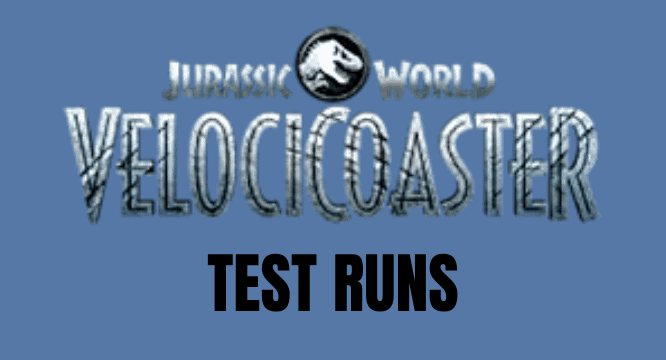 If 2020 itself has not been enough of a reason to wish for the faster arrival of 2021, Universal Orlando’s latest roller coaster has made theme park fans want to speed up time even more. While we wait for its official opening next summer, Universal Orlando’s VelociCoaster has been kept under the magnifying glass as it completes construction. And now, it appears the VelociCoaster test runs are running the full course of the track at higher speeds, inevitably looking for fine-tuning.

We have NEW nighttime footage of the highly anticipated roller coaster making its test runs below!

Midway Mayhem on Twitter shared some slightly illuminated nighttime footage of the much anticipated Jurassic World Coaster continuing to test the upper loops, and, according to his tweet, the full course as well. It appears that the coaster’s vehicle wrapping has been removed, as you can see that the light is not evenly reflected off of a white surface. Being dark, we are unable to get a full look at the VelociCoaster ride vehicle.

Mayhem’s footage is a ten-second clip, showing two coaster runs over the tall loop in Islands of Adventure’s Jurassic Park area. According to Universal, the Velocicoaster attraction has intense maneuvers like two intense launches, four inversions and will arrive in the Summer of 2021 at the Orlando theme park. Below is the Universal teaser for the prehistoric predator’s ride.

Guests of Universal will certainly be in for theming surprises when they ride VelociCoaster. News broke that with the installment of some clever carnivores, it appears that sound boxes were also installed, meaning visitors could be looking at attacks from fierce Velociraptors while theme park fans ride! “Of course, the dinosaur[s] can move at any time and not be so close to the track, but as it stands – it looks like this will be a very up close and personal meet with the raptor.”

Ambiance and waterfalls are the other additions that have been recently added to the VelociCoaster. Trees lining the area from Hogsmeade help separate sightlines, which are not always a huge issue at Universal, but being considered nonetheless. The waterfalls do not appear to be in proximity to get you wet but instead add to the visuals and environment to enhance the thrill ride experience.

These VelociCoaster test runs will help the designers fine-tune the sounds, waterfalls, and possibly lighting as construction completes and speeds increase. We’re excited to finally get the announcement of the opening date! Dinosaurs Rule!

Leave us a comment about what you’re most excited about in regards to the VelicoCoaster.