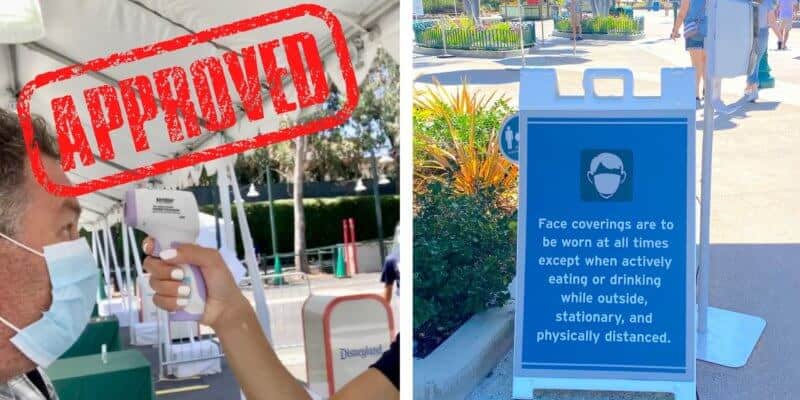 During the coronavirus pandemic, visiting a theme park could seem daunting to some. Of course, this means exposing yourself to groups of people, but if there is a company that knows how to put safety first, it’s Disney. In Walt Disney World there have been no outbreaks linked back to any Disney park, social distancing is now second nature, and sanitization is around every turn!

These types of precautions are exactly what we should be gearing up to see once Disneyland Resort reopens. The two DLR parks: Disneyland and Disney California Adventure have been closed since March, but have taken every safety measure to prep for the parks reopening. Social distance signage is up, sanitizers are everywhere, and Disney is ready to assist in creating guidelines that can help reopen the theme parks as safely as possible.

We do, however, have a taste of how Disneyland Resort’s safety and precautions will be from Downtown Disney. The Downtown Disney District is the only part of DLR that is currently remaining open, and Guests are loving the magic they are able to feel at the downtown center while they await Disneyland reopening. Even though Downtown Disney hits capacity almost every weekend — sometimes even minutes after opening — Disney fans feel safe. Many California locals who have been supplementing their theme park trips for a Downtown Disney dinner or shopping day have expressed that they actually feel safest when visiting.

@GavinNewsom Downtown Disney is the ONLY place we feel is safe with temp checks, absolute mask requirements and social distancing lines are ENFORCED (unlike Walmart and grocery stores who “ask” but don’t confront mask-refusers.) #disneyland #disney #anaheim

@GavinNewsom Downtown Disney is the ONLY place we feel is safe with temp checks, absolute mask requirements and social distancing lines are ENFORCED (unlike Walmart and grocery stores who “ask” but don’t confront mask-refusers.) #disneyland #disney #anaheim

Cast Member enforce mask requirements and social distancing at Downtown Disney, which is a quality we can only speculate will transition into the theme parks once they reopen. The tweet is also directed to Governor Newsom, who is a major player when it comes to the Disney parks reopening.

The Governor must release the guidelines for the theme parks reopening, and has taken a very long time to do so. After refusing Disney’s attempt to collaborate, Newsom finally came up with a set of guidelines that would help bring back life and economy to Anaheim. Unfortunately Disneyland Resort, Universal Studios Hollywood noticed that although the guidelines were on the right track, they needed some tweaking in order to allow theme parks to open with the safest measures. Newsom listened to the California Attractions and Parks Association and the guidelines release has been postponed to a undetermined date.

In the meantime, more Guests are speaking out on their positive experiences at Downtown Disney. Inside the Magic’s Editor-In-Chief, Bailee Abell, is a short ride away from Downtown Disney and has visited multiple times during the pandemic. We asked her how she felt when visiting:

“I feel safer at Downtown Disney than any local grocery store. The Cast Members are so diligent about enforcing the proper use of face coverings, and I’ve found that Guests generally abide by the physically distanced markers and seating areas so that no two parties are staying close together. I’ve always felt safest on Disneyland property, and even in a pandemic, they’re doing an amazing job.”

It seems that there is a consistent thread of Disneyland Resorts safety measures allowing Guests to feel safer due to the enforced and elevated procedures. You do not need to have your temperature checked before entering a grocery store, and some shops will not tell their customer to make sure their mask must be over their nose, but Disney will. Bailee also experienced virtual queues on her trips to Downtown Disney, which helped eliminate long lines to ensure social distancing on busier days.

@queenkimeow took to twitter to go into detail on the types of masks allowed in Downtown Disney. She stated:

When I see someone wearing a neck gaiter or a face mask with a valve…thankfully downtown Disney doesn’t allow people in with them. Other places should do the same smh~

When I see someone wearing a neck gaiter or a face mask with a valve…thankfully downtown Disney doesn’t allow people in with them. Other places should do the same smh~ pic.twitter.com/4zb61TURCK

Disney enforces proper face coverings that will limit the spread of germs, and will not allow you to enter with a mask that is not approved. That means handkerchiefs and bandanas that you may see some people wear would not be permitted in Downtown Disney as they do not efficiently stop the transmitting of germs due to their material and design.

Disney often is able to create their own bubble, and this time they have created their own safety bubble that Guests can take a moment to relax in without feeling terrified for their safety. Of course, you must abide by all the precautions in order to do your part, but it is good to know that if you or anyone around you are not, Cast Members will take corrective action.

If you want to enjoy a socially distanced Disney, you can today! Although Disneyland is still awaiting the green light, Disney World is open for magic! Visit Cinderella’s castle at Magic Kingdom, or Toy Story Land at Disney’s Hollywood Studios today. Click here to begin your next Disney vacation!

Do you feel safe at Downtown Disney? Let us know below!