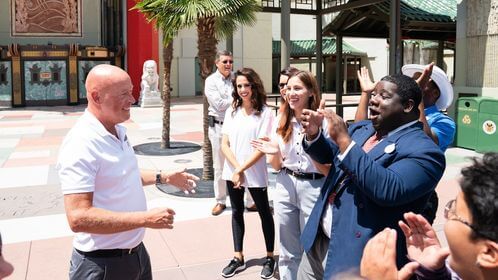 CEO of the Walt Disney Company, Bob Chapek, wants to see as many Cast Members as possible get back to work as soon as possible.

Speaking with CNBC, when asked if he anticipates more layoffs in the Disney Parks division in the future, Bob Chapek said the following:

“We hope not. Obviously, we are watching very closely what the state of California does as an indicator [of] whether we can retain some of our Cast that are right now on furlough. We’d like to keep them on furlough until we can reopen. But if — I think what the government said was, ‘No time soon, we’re not going to be pressured into reopening.’ That obviously gives us some pause. And we’d like to put our Cast Members back to work, as many of them as soon as possible, if the government would let us do that.”

Disney Parks was recently hit with a major round of layoffs. 28,000 Cast Members at both Disneyland and the Walt Disney World Resort were let go.

After immediately rushing into discussions with Unions, it was revealed that the layoffs included but was not limited to 8,800 part-time Cast Members at Walt Disney World, 400 Imagineers, and 2,500 non-unionized Disneyland Cast Members.

Chapek’s statement follows the news of Disney Parks Chairman Josh D’Amaro taking to both the Downtown Disney District in California, and the Walt Disney World Resort to personally visit, talk with, and console his beloved Cast Members.

It should also be noted that Chapek is only referring to the California state government. In the State of Florida, Governor Ron DeSantis has already begun Phase 3 of his reopening plan which states, “Theme parks may return to normal operations with limited social distancing protocols.”

However, Chapek clarified that Disney World is electing to remain at 25% capacity, following guidelines suggested by the CDC, and it will remain at that capacity until the CDC changes its guidelines.