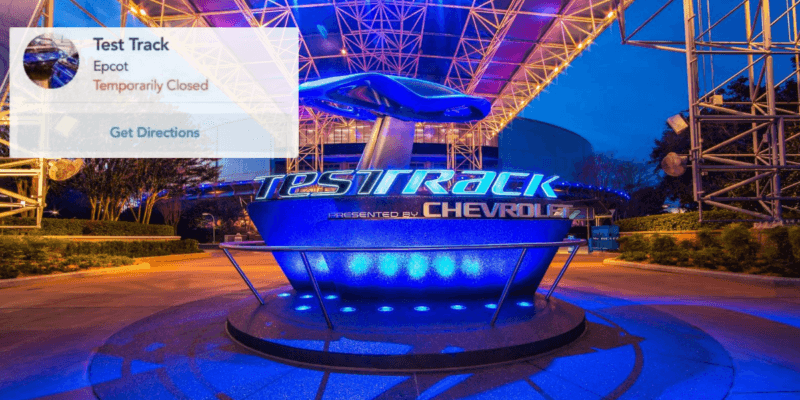 UPDATE: Test Track is up and running

This morning (9/2) at 8:05 am, Epcot’s E-ticket attraction, Test Track, had once again gone down due to technical difficulties.

Twitter user, WDW Stats, explained in a tweet this morning that a technical difficulty “takes 74 minutes” to reset the attractions systems and resume operation.

Test Track is a fan favorite when visiting Walt Disney World’s EPCOT in Orlando, Florida, but recent technical difficulties have made this a commonality with the attraction.

For weeks, Test Track has faced numerous down time and technical difficulties, making it challenging for guests to experience their favorite EPCOT attraction.

Just announced, Test Track is up and running again! Fasten your seatbelts, and get ready to ride!

Test Track initially opened to the public in March of 1999 to rave reviews and smiling faces.

Taking the place of the World of Motion attraction that taught guests the history of the automobile since the park’s opening in 1982, Test Track became EPCOT’s first E-ticket attraction.

Initially, guests “drove through” a GM “testing facility” through a series of evaluations, including an arctic terrain, boiling-hot desert, and crash test, to give guests a look into how companies test automobile prototypes.

The highlight of this attraction is a speed trial placed outside the exterior of the show building. Cars travel at a top speed of 64.9 mph.

In 2012, EPCOT’s Test Track closed for eight months to be re-imagined and received a new sponsor: Chevrolet.

Guests now design and test their vehicles throughout the attraction on a “SimTrack.”

Related: James Gunn Speaks out About EPCOT’s ‘Guardians of the Galaxy’ Ride

As EPCOT faces dozens of new renovations and upgrades that will be implemented throughout the park, we hope Test Track receives an update to withstand large Florida crowds- especially in the Summer!

Have you experienced a down time while riding Test Track? Let us know in the comments below!

Plan your next Disney World Vacation and enjoy all that EPCOT has to offer!