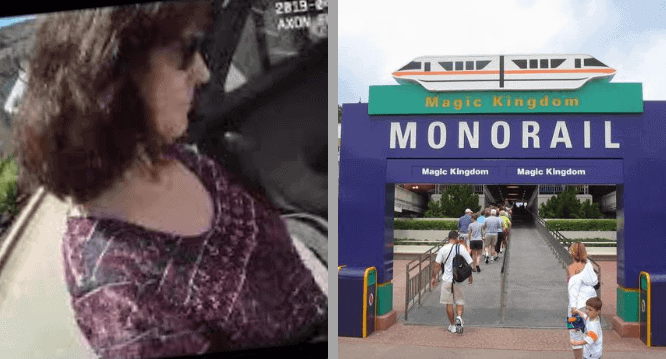 In April of 2019 a grandmother was arrested outside of Walt Disney World at the “TTC,” or The Transportation and Ticket Center, for having a bottle of CBD oil in her purse. Hester Burkhalter, age 69, was arrested after a Disney security guard found the bottle of CBD oil while searching her purse in the security line. While the case dragged on a bit, charges against her were dropped in May of 2020. She decided to sue (we reported this in August of 2020) and the case is now moving forward to Federal Court.

Like all Walt Disney World guests, Burkhalter had to go through the bag check line outside of the Transportation and Ticket Center, where her bag was passed through the inspection line. According to Florida state law, any type of CBD is illegal unless you have a prescription. Burkhalter claimed to have a letter from her doctor regarding the oil, but this was not enough for Florida deputies who took her into custody. Disney also does not allow marijuana or marijuana-like substances on its properties.

Burkhalter claims that she and her family visited both EPCOT and Disney’s Hollywood Studios during the vacation where she also had the 1oz. dropper bottle of CBD in her purse. She passed through security at these times with no problem and her bag was not confiscated.

During the arrest, Burkhalter cites assault and humiliation from on-site deputies as she attempted to travel to Magic Kingdom. The Grandmother was immediately arrested for possession and was then handcuffed in the backseat of a vehicle. Burkhalter then claims she suffered “a mild panic attack after complaining she could not breathe and began to vomit”, the lawsuit said. After Burkhalter was booked, she then was asked to strip naked and “bend over” for a cavity search, the lawsuit stated. She was then released 15 hours later and prosecutors dropped the charges 11 days later.

As the 2019 case drags on, Burkalter, known on the internet as Disney’s CBD Grandma, is continuing her lawsuit against both The Walt Disney Company and the Orange County Sheriff’s Office, which seeks up to $18 million in damages (plus additional damages, for her husband and other family members who were vacationing at the theme park with her). “Every time I think about it a whole lot or talk about a whole lot, I get real[ly] nervous and sick to my stomach,” Burkhalter said.

She is alleging the aforementioned assault, battery, false arrest and imprisonment, defamation, and emotional distress, according to her lawyer and civil rights attorney, Ben Crump.  Crump is most recently known for representing the family of George Floyd.

The lawsuit has been recommended by the attorney team to be moved OUT of the Ninth Judicial Circuit in Orange County and move it to a higher court. Since Burkhalter is a North Carolina resident, she has asked to move her case out of Florida since she doesn’t live there.

What’s REALLY interesting is that full body cam video, shared on WESH, shows Burkhalter remaining extremely calm throughout the arrest and being placed into the vehicle. The video shows Burkhalter being handcuffed and then nicely placed into the backseat before being allowed to sit up front when she complained about a panic attack. The deputy even helps acquiesce her request to move her leg and dust off the seat.

However proper the ride may have been, after the Florida state attorney dropped the charges against the “CBD” grandmother, Burkhalter hired Ben Crump with the full intention of suing Disney and the Sheriff’s Office. She then claimed in news conferences, “He was very mean, he was cruel,” while her attorney, Crump, stated: “Horrific treatment that they placed upon this church-going, law-abiding grandmother.”

Burkhalter continues to claim she was unjustly accused.

At this time, CBD is still not legal in the State of Florida, nor does Walt Disney World Resort allow it on their property. Fox 35 reports that once a recently passed hemp bill is signed into law, CBD oil will become legal in Florida. This will allow state residents to legally use the product anywhere, including the Florida theme parks.