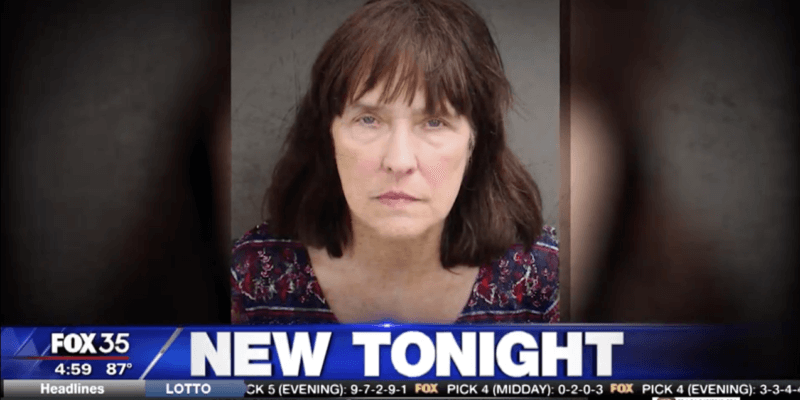 Body-camera video released of Orange County deputies arresting a great-grandmother who was found in possession of CBD oil at Walt Disney World tells a different story from her original claims of her arrest.

Hester Burkhalter, 69 was arrested April 15 at a Walt Disney World checkpoint after an Orange County deputy found CBD oil in her purse.

In new Body-camera footage released Tuesday, video shows Burkhalter being handcuffed and then respectfully placed into the backseat of a patrol car before being allowed to sit in the front after complaining about suffering a panic attack.

In the video, Burkhalter struggles to get her leg into the car and asks for help from the deputy who kindly helps the woman. “Push my leg up please. There. Thank you,” Burkhalter said.

In the video, it’s clearly seen that the deputy who drove Burkhalter to jail kindly cleans off the front seat before helping her into the patrol car.

During the ride, Burkhalter even chats with the officer, saying: “You know, I had some CBC oil. You know, got it in North Carolina, and I had no idea.”

Throughout the rest of the video, Burkhalter seems calm and the deputy even asks Burkhalter if she needs anything.

After the state attorney dropped the charge against the great-grandmother, she hired attorney Ben Crump in the intention of suing Disney and the Sheriff’s Office.

Burkhalter claimed: “He was very mean, he was cruel,” during a news conference.

Her attorney Crump stated: “Horrific treatment that they placed upon this church-going, law-abiding grandmother.”

According to WESH, regardless of how the situation looks, Hester said she was humiliated, her dream family vacation was ruined, and she claims she was unjustly accused.

To see the full video, you can head over to WESH.

Attorney Crump is a high profile civil rights attorney in Florida with multiple noteworthy prior clients, including Trayvon Martin, the 17-year-old African-American teen from Miami that was fatally shot by George Zimmerman. He has also appeared as an attorney in the reality court TV show “You the Jury,” which had a short run on TV. Crump will be working on the case with co-counsel Michele Rayner, another top rated attorney in Florida

Crump shared with Fox 35 that he and his client are preparing to sue both Orange County and Disney unless, per Fox 35, “they take responsibility for their actions.” Fox 13 reports that the attorneys also stated, “While Ms. Burkhalter’s charges have since been dropped, her family’s dream vacation will always be remembered as a nightmare complete with 12 hours detained in jail after this false arrest…We expect better from Walt Disney World and demand a public apology while we pursue all avenues for justice for her.”

Furthermore, “Deputies are responsible for enforcing Florida law and Orange County ordinances,” the Sheriff’s Office said in a statement. “Although CBD oil is illegal without a prescription, our top drug enforcement priority and focus at the Orange County Sheriff’s Office is to get deadly drugs, like heroin and fentanyl, off the streets of our community.”

As we previously shared, Burkhalter had stated that she was taking the CBD oil on the recommendation by her North Carolina doctor to help her with arthritis. While Burkhalter did not possess a prescription, which would suggest the arrest was technically lawful, the Sheriff’s department’s stance on this particular drug also helps explain why she was released without being charged.

How this ultimately plays out is yet to be seen, but stay with Inside the Magic for updates on this developing story.