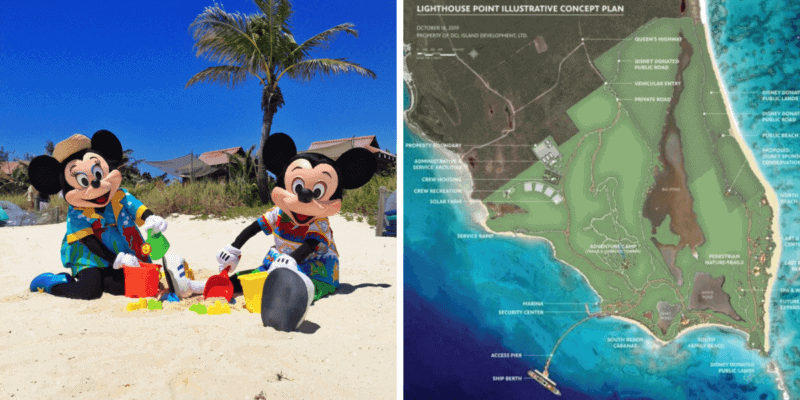 “It is also important that notwithstanding our economic challenges we seek to have and find harmony and balance between the need to develop our economy and the need for us to maintain what we have.” – Hon. Romauld Ferreira, Minister of the Environment and Housing

Disney Cruise Line will soon have a second private destination for its passengers to explore. But as the creation of what will be called Lighthouse Point works to get underway, Disney is first set to release an assessment of how this new project will affect the environment.

Related: You Now Have More Time To Use Disney Cruise Line Credits

Appropriately called an Environmental Impact Assessment (EIA), the Bahamas’ Director of the Department of Environmental Planning and Protection, Rochelle Newbold, stated in a press conference on September 24 that Disney’s EIA will be released for public review “in a matter of weeks.”

Now, Disney Cruise Line submitted their EIA in December 2019, but construction cannot begin until the EIA as well as Disney’s Environmental Management Plan is accepted by the Bahamian government as The Walt Disney Company’s second “private island” destination will be set in the Bahamas; at the southern tip of the Island Eleuthera.

Even though Disney’s report was filed 10 months ago, it is still not public because the Government is still in the process of finalizing the EIA. Newbold explained that the reason for the delay was because Disney’s document came about at the same time an Act was passed which affected the government’s regulations. Once complete, then the Assessment and Management plan must also be subject to a public review period. Only after those steps and all other government permits and approvals have been granted can Disney look to begin construction of Lighthouse Point.

It should also be noted that the project already came under fire by environmental groups last year.

“Keep in mind,” she said, “that the placement of the document online does not indicate a finalization of the document, but it does conclude a discussion between the technical persons of Disney and ourselves to make sure that we have captured all the issues. But, of course, we do need the input from the public to make sure that that is a complete process and a conclosure of concerns from the Bahamian people.”

“It is also important,” said the Hon. Romauld Ferreira, Minister of the Environment and Housing, “that notwithstanding our economic challenges we seek to have and find harmony and balance between the need to develop our economy and the need for us to maintain what we have.”

You can watch the full press conference here:

Lighthouse Point is was announced at the last D23 Expo along with the announcement of Disney Cruise Line’s fifth and to-be largest cruise ship, the Disney Wish, will join the fleet which features the Disney Magic, Disney Wonder, Disney Fantasy, and Disney Dream. This new Imagineering project will be led by Joe Rohde.

Are you excited to set sail for Lighthouse Point at Eleuthera with Disney Cruise Line? Let us know in the comments!