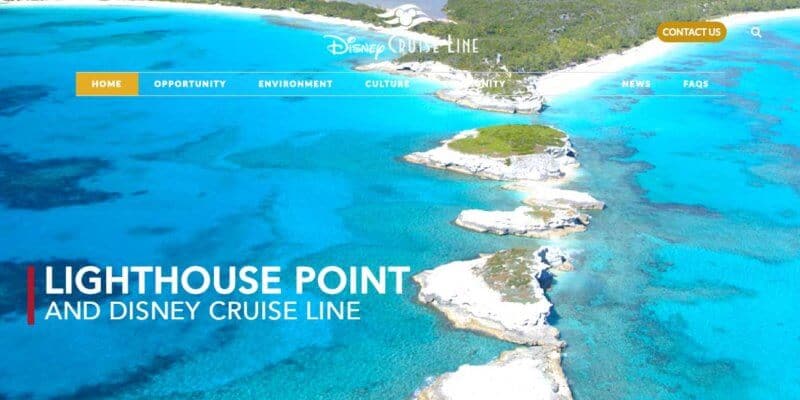 The project was announced previously and is located at the southern point of Eleuthera. Disney made a commitment to The Bahamas, saying they will hire Bahamians to work at its new cruise destination. Even the website was designed by a local Bahamian company called Felicia Creative. The new website gives detailed illustrated concept site plans as well.

The vibrantly-colored site features a wealth of information on the new project and includes detailed new sections that discuss opportunity, environment, culture and community.

The opportunity section focuses largely on plans to contribute to the Bahamian economy, and the environment section takes a look at tackling the most important–and most controversial–aspect of the new project with information on how Disney will protect the natural environments in the area and how they will work to sustain that environment.

The culture section details things first revealed at the 2019 D23 Expo in Anaheim, California, by Imagineer Joe Rohde, as well as press releases pertaining to those details. Still another section focuses on Disney’s involvement in the local communities in which they do business and highlights the fact that Disney has been playing this kind of role in Nassau, the Abaco Islands and now in Eleuthera for more than 20 years combined.

There is also a progress, news and frequently asked questions component to the site. The progress page shows visitors the most up to date look at the illustrative concept plan. The plan is dated October 16, 2019. It includes Adventure Camp that boasts nature trails and lookout towers, as well as what looks to be a zipline, a tree trail and even water slides.

The concept plan appears to show beach cabanas along the south beach and an area called the “South Family Beach” closer to the lighthouse location. This area was donated back to The Bahamas as public land.

There’s even an Art & Culture Center, a further Cabana Expansion area and a Spa & Wellness Area at the East Family Beach area. The concept art featured looks to show a splash zone or a pool area as well.

The concept art for the East Family Beach which includes Disney’s Lighthouse Point is beautiful enough that we want to start packing our bags now! It’s relaxing just to look at it!

There’s even an area for the proposed Disney-Sponsored Conservation Center on the North Beach of the destination. This area will lie within the area of land that Disney donated back to The Bahamas. It will include a public road, also donated by Disney that will give visitors access to the public beach.

Disney has already purchased the Lighthouse Point property and is determined only to move forward with plans if it can do so in a way that is in keeping with Disney’s longstanding commitment to the environment. In short, Lighthouse Point has been designed to be far more than a mere port of call. Disney has hired scientists and other professionals to determine the impacts such a project might have on the environment. Construction will only begin once plans are accepted by the Bahamian government and after all necessary permits and approvals have been secured by Disney Cruise Line.

It’s an exciting project, and we will continue to follow its development.

What’s your favorite thing about a Disney Cruise? Are you planning to visit Lighthouse Point once it’s completed?