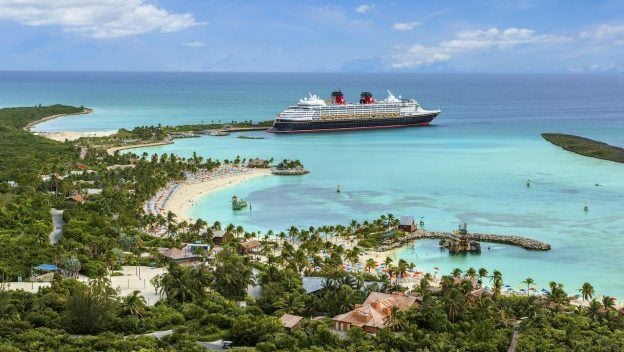 In March, we shared that Disney had purchased Lighthouse Point from the Meritage Hospitality Group an acquisition that would bring an additional 190 acres under the Disney Cruise Line name along with employing a number of Bahamians and seeing aside land for conservation efforts on the site. Since this announcement, however, some opposing groups have created websites and online petitions in an effort to stop Disney’s expansion in the Bahamas.

Those who support “Stop Disney,” the group that created a Change.org petition against this purchase, point out that with numerous locations across the Bahamas to dock cruise ships, doing so at Lighthouse Point does not make the most sense in their eyes. The group reports that the plan to construct a port among the center of the property (thereby creating a half-mile long pier) would endanger coral on the reefs beneath the construction. They also believe that so far there aren’t any economic benefits to local communities Bahamas from the addition of Disney’s second island.

The addition of Disney Cruise Line’s second island would increase port calls in Nassau by approximately 30-40%, and as Bahamian Prime Minister Hubert Minnis mentioned during the March announcement, no construction on Disney’s end would begin until a full Environmental Impact Assessment and Management Plan is approved.

The backlash towards Disney’s second Bahamian island comes amid a recent A- rating from environmental groups on the 2019 Cruise Ship Report Card (where other cruise lines earned Cs and Ds, and a few ultimately failed on environmental friendliness). In response to the controversy surrounding Lighthouse Point, Disney released a statement that they “will only move forward with [their] project at Lighthouse Point if [they] can do so in an environmentally responsible manner.” Disney has also been quick to point out that their own team of conservation staff is working closely with conservation groups in the Bahamas to ensure that every step of the construction at Lighthouse Point is done responsibly and with minimal environmental impact.
Disney Cruise Line has recently been named the Number 1 Cruise Line in the World by Travel + Leisure, and it’s earned high marks on Cruise Critic for the best private island with Castaway Cay. We expect to hear more about the future of Disney Cruise Line including the development of the second private island at this year’s D23 Expo, coming up August 23-25 in Anaheim, CA, and we’ll share additional updates on the development of Lighthouse Point as we learn more.
It may be a while until we get to visit Disney’s second private island, but that doesn’t mean you can’t see Castaway Cay or one of the latest Disney Cruise ships for yourself! Check out Academy Travel, an Earmarked Diamond Authorized Disney Vacation Planner that provides that same exceptional service to its clients as Disney does. The Authorized Disney Vacation Planners at Academy Travel can provide you with a no-obligation vacation quote, help you plan the Disney Cruise Line vacation of your dreams so you can see exactly what vacationing on the #1 cruise in the world is like. Click here for a free vacation quote from Academy Travel!

What do you think of Disney’s decision to develop Lighthouse Point? Let us know your thoughts in the comments!