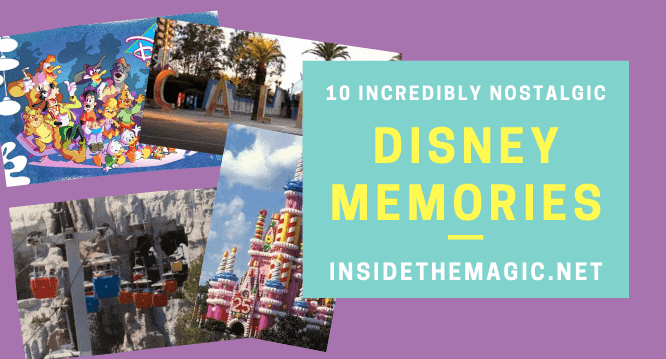 Disney minces no words when it comes to nostalgia. With over 83 years of films, music, entertainment, merchandise, and theme parks, there’s no shortage of memories for any Disney fan, regardless of age. Those born in the early 80s have a special connection with Disney in that the “Golden Age” of animation and the creation of several theme parks lines up with their adolescence. Check out these 10 nostalgic Disney memories for long-time fans that stir up Disney magic.

You can hear that classic Disney VHS opening schpiel! It’s ingrained into our brains in the form of a favorite Disney memory, just like getting those razor-sharp cuts on our palms from the edges of the Clamshell cases. From the inside pamphlets that fell out like rain to the specific smell of the plastic, these clamshell tapes have been such a milestone in our lives, they’ve been remade into merchandise! 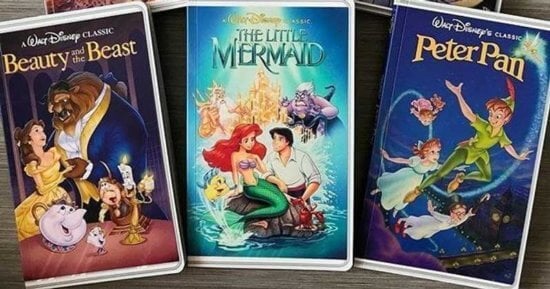 The original icon of MGM and later Disney’s Hollywood Studios Park, the Earfful Tower still stands in our memories. Towering over the working backlot, the water tower was unique with it’s Mickey Ears hat and reminded us that the Park also served as a real studio! While the Earffel Tower was not used to hold water, it was inspired by the landmark water tower in Burbank, which is where Disney Studios has been since 1939.

I’ll bet you can hear this photo, too. The Disney afternoon lineup was appointment television, with our favorite made for TV cartoons. Mirrored on local television networks, it gave the opportunity to watch Disney cartoons to those that weren’t able to subscribe to The Disney Channel. It included awesome entertainment such as Darkwing Duck, Tailspin, Duck Tales, GummiBears, Gargoyles, and Goof Troop.

The Skyway was a cherished part of both Disneyland Park and Magic Kingdom, creating a connection between two lands of the Park. The Disneyland version crossed through the Matterhorn mountain, while Walt Disney World’s version connected Tomorrowland with the far end of Fantasyland.

Modern times saw the removal of both Skyways, but the installment of the longer-reaching transportation element, the Skyliner, at Disney’s Hollywood Studios and EPCOT’s international gate. 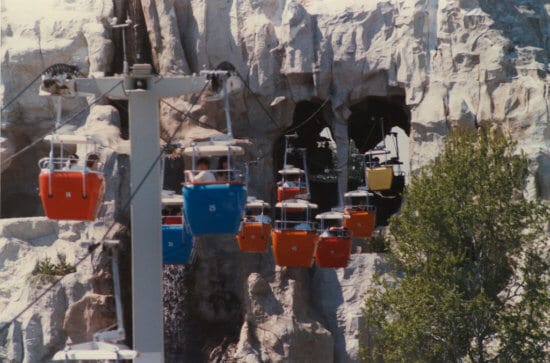 Much like the Great Movie Ride, Disney’s Studio Backlot Tour was one of the first rides built for Hollywood Studios in 1989. Visitors boarded a tram to take them through the 30-minute tour, called Studio Backlot Tour, and gave visitors a taste of what it was like to make superstar action movies.  As it aged, the Backlot itself was chipped away for newer attractions like the Lights, Motors, Action! stunt show and much later, Star Wars: Galaxy’s Edge.

A highlight of the ride was a place called “Catastrophe Canyon,” which was the attraction’s last-standing film set. Here, Guests would watch from the tram as a movie catastrophe took place, including an exploding gas truck, a massive flash flood, power lines falling, and a fake earthquake. Afterward, you would hear from the stage manager that all was clear, and the 3.5-minute reset would begin taking place. You can watch an entire ride-through of the now extinct attraction below.

As a Gen X-er, I lived for Happy Meal! Whenever Disney had a campaign with them for toys to promote a movie or project, the urge to collect them got even stronger.  McDonald’s toys of a Disney nature are still popular with collectors, as seen in eBay sales over the years. Do you still have any?

You either remember this as a cherished moment or a horrid mistake. There is no in-between. In 1996, for the 25th anniversary of Magic Kingdom, Imagineers covered the facade with cake decorations, creating a sugar rush of a celebration. For the 50th anniversary, we get a slightly more sensible Cinderella Castle paint job that seems to change in the sun.

We’re lucky that the Disney Parks Blog looked back on this revolutionary EPCOT center show from the park’s original offerings. Kitchen Kabaret was an opening-day offering in THE LAND pavilion, “which promoted nutrition through songs and spirited characters. The show was hosted by Bonnie Appetite who had flat out adorable costumes and a kitchen that came to life with song.” You can find YouTube videos of the songs, but the real Hidden Mickey is the “Veggie, Veggie, Fruit, Fruit” stand at Disney California Adventure’s Food & Wine Festival.

10.  The Origin of Orange Bird

Alongside the tweet tweet of the Tiki Room at Magic Kingdom, a unique mascot appeared in Adventureland. The Florida orange farmers of the 1970s sought compensation for sponsoring the Tiki Room attraction. Orange Bird was created to help sell the delicious Florida oranges in the region and appeared in television ads, a record album, and educational shorts into the 1980s. In 1987, the Florida Citrus Commission ended the campaign and Orange Bird was removed from the theme park.

Orange Bird resurfaced in 2004 at Tokyo Disneyland due to his involvement in National Orange Day (April 14th) and then appeared on United States merchandise, as well. A short time later, Orange Bird made his celebratory return to Sunshine Tree Terrace and has remained a staple of the Disney Parks. Below, you can see one of the orange sales centers as well as a 3D statue of Orange Bird.

Ready to make some Disney memories of your own? Try booking a bite-sized family Disney trip with Academy Travel. You’re sure to experience some bucket list memorable moments and perhaps remember some now-lost parts of the Disney Parks.

Which of these is your favorite Disney memory? If one of yours didn’t make our personal top ten, please share it in a comment below!

Comments Off on 10 Nostalgic Disney Memories for Long-Time Fans