The Disney Afternoon Disneybound Challenge - Inside the Magic 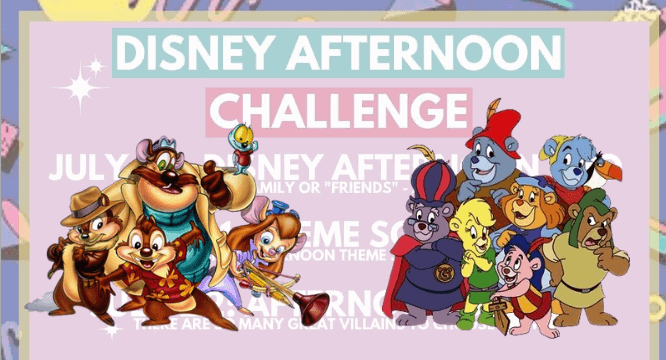 School’s out — Turn on the telly and grab a snack. Disney Channel cartoons are about to come on!

In a friendly partnership with @tiffiestarchild, @thedisneybound on Instagram is hosting a five day long Disney Afternoon Disneybound challenge. Incorporate your favorite 1990s Disney cartoons while shopping your own closet for animated looks!

Remember gluing yourself to the TV screen watching Darkwing Duck, Rescue Rangers, Ducktales, Tail Spin, and more? The Disney Afternoon cartoon set also aired on ABC concurrently, for those of us growing up without a Disney Channel subscription, including Gargoyles, Adventures of the Gummi Bears, and Goof Troop, which spawned it’s own direct to video movie.

The Disneybound challenges this year have included #BoundingWithPride, DisneySongs, Hamilton and Marvel Avengers themes. Participants use tips from the Disney Bound creator Leslie Kay, such as shopping your own closet, utilizing solids and adding rich details with accessories to create a look from a Disney character.

“Excited to team up with the love@tiffiestarchild next week for the Disney Afternoon bounding challenge! ?? The fun kicks off on July 20th!”

Excited to team up with the love @tiffiestarchild next week for the Disney Afternoon bounding challenge! ?? The fun kicks off on July 20th!

Themes include Disney Duos: For this first challenge, think about Chip ‘n Dale from animated series Rescue Rangers. Goofy and Max, A few of the Gummi Bears. Whether it’s a romantic Aladdin and Jasmine or a buddy crimefighting duo, double your outfits or join up from afar for the starting date of July 20th.

Theme Song Hype: Become a kid again with a trip back in time to the 1990s via song lyrics and jamming tunes. Which theme song is already running through your head?

Afternoon Baddie: Disney Princess? More like Disney Villains! Try out a new game with an evil character look. There’s no need to buy designer clothing – check your own closets for dark-colored clothing with dashes of purple or burgundy.

Totally Fly 90s style: Try out a fly 1990s throwback look and add a Disney twist. Make this style all your own with a retro bag, or other vintage inspiration.

Girl Power!: Girls have more fun, right? We’re already musing on where we can find a periwinkle dress to channel Gadget! Browse Disneybound girl looks on the web to get more 1990s ideas!

If you’re already spouting with ideas, create an outfit (or pull one from a past bound) and post it on Instagram or Twitter with #Disneybound, #DisneyAfternoonChallenge, or use the same hashtags and @thedisneybound on IG. Using stories, you may be reshared to the main channel! Check out other users Disney style creations starring Disney afternoon characters, or Disney Parks backgrounds.

Which Disney Afternoon Disneybound Challenge theme is your favorite? Leave us a comment about your cosplay and bounding ideas!

Comments Off on The Disney Afternoon Disneybound Challenge