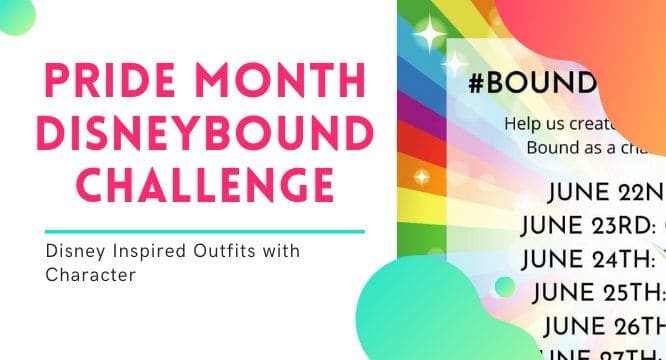 Bernadette Nunez’s Twitter feed showcased her timely challenge to dress like the rainbow in honor of Pride Month (June). The seven-day visual event, which bounders are referring to as the #BoundingWithPride Disneybound Challenge, subs out Indigo for Pink and calls on participants to channel a character as well as a color and showcase the outfit. Can you think of a Disney outfit for each day?

Many Disneybounders take tips straight from the creator of the style, Leslie Kay. Leslie often recommends looking into your own closet to find pieces to integrate into a character. You’d be surprised to see “who” is hiding between your clothes hangers! This also remains an inexpensive way to put together outfits on the fly for weekly challenges like this. It shouldn’t be a brainbuster, you should be having fun! Check out the smiles on these bounders who are embodying each color that we’ve passed this week.

Bernadette kicks off the week with an Iago Disneybound incorporating red. Iagos’ feathers are blazing!

Restarting the #BoundingWithPride this week. Today we start with Red. Instead of reposting the one I did earlier this month, I did a new one.#boundwithpride @thedisneybound #pridemonth #disneybound #rainbow #iago #iagodisneybound #disneybounding #disneybounder #disneyootd pic.twitter.com/48i0EYxcbI

ORANGE you glad this Disneybound made it to your life? We’re living for the Fischwa Fellow windbreaker and those boots!! YES!

Tacos? Who said tacos? Belle is a great yellow Disneybound for @HandsDownDisney, who lets us know what she’s really thinking about.

We’re green with envy for those at a tiki bar right now. Trader Sam’s collection from The Disney Dress shop makes an easy combo for today’s color.

Blue, Purple and Pink are still ahead of us. What combinations can you pull from your closet, drawers, or Disney collection? There’s still time for you to chime in with your #BoundingWithPride outfits! Log onto any social media channel that you’re active on and log your colors! Feel free to “catch up” with a few outfits even on the last day, and join in the conversation.

Which Disneybound are you thinking up for the colors of the rainbow? Leave us a comment below!

Comments Off on #BoundingWithPride Disneybound Challenge