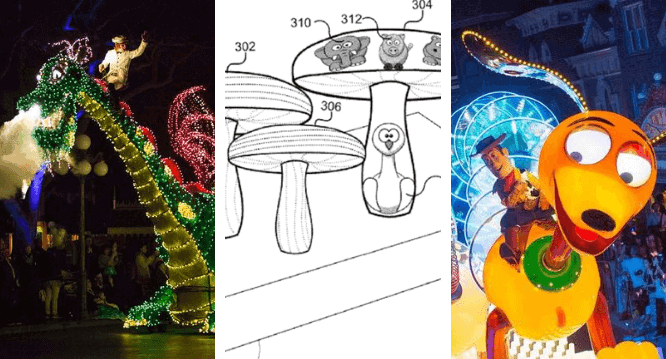 Magic Kingdom is rapidly approaching her 50th birthday, on October 1, 2021. The plans for the 50th anniversary have changed a bit this year, with the unexpected travel disruption, reduced hours, and capacity changes at the Walt Disney World Parks. As the impending celebration nears, we’re eagerly awaiting official news of parades, fireworks, celebrations, or merchandise to go along with it.

What’s on most Disney fans’ minds is the possibility of a long-awaited Magic Kingdom nighttime parade. Will we see the addition of floats sailing down Main Street, U.S.A.?

Ever since The Main Street Electrical Parade moved over to Disneyland, fans have clamored for the cross-country shipping of Paint the Night. While this is may be a fairly easy move for Disney to make, there are a few other options on the table, suggested by a patent for “Ordered Mapping on a Three-Dimensional Projection Surface.”

This appears to be something like the mapping done to Cinderella Castle for Happily Ever After, and looks at how media is displayed on 3-D Models, and while Cinderella Castle is a 3-D model, we’re thinking that something like a parade float might be what this referring to. You can read more about that parade patent here and how it may be used by Disney on a parade float.

Yet another piece of information we’re following is this timeline about the possibility of a new Magic Kingdom Nighttime parade. There is much discussion on forums by Disney fans about the possibilities of the Electrical Parade returning, Paint the Night being borrowed, and the cancellation of the event entirely. Forum user LiterallyNobody, a frequent user of the forum boards, recently commented that the new nighttime parade idea was off the table entirely, due to a few factors.

The user was given flack for their rumors not coming to fruition at times, but they cited “contract getting pushed back by at least a year” as their source, suggesting that the parade may be delayed. At that point would it still be billed as a 50th-anniversary element, or would it just be promoted as a new parade for Magic Kingdom? (Which we’re not knocking… it’s been since 2016 that twinkling lights lit up a Magic Kingdom parade, and we sincerely miss the Spectromagic Parade!)

At this time, nothing has been confirmed in official announcements from Disney.

“Project Nugget” is believed by many Disney fans to be code for the 50th-anniversary plans. Because the gold (a traditional 50th-anniversary gift) element often comes in nugget form, it’s an easy line to draw with the code phrase.

There was a permit filed for fireworks at 1440 Floridian Way, which, if you weren’t sure, is where the fireworks launch point is for Disney’s Magic Kingdom nightly spectaculars, including Happily Ever After. We connected the permit to possible upcoming projects like a restart of theme park fireworks or something new for the 50th anniversary, because of the permit’s name: “MK Project Nugget F-B Electrical.”

While we wait for official Disney Parks Blog news of a new Firework tag, an anniversary parade, or official merchandise, we’ll continue to put together puzzle pieces for clues to the celebration. Patents and plans sure help!

What kind of nighttime parade would you like to see next year? Leave us a comment below!