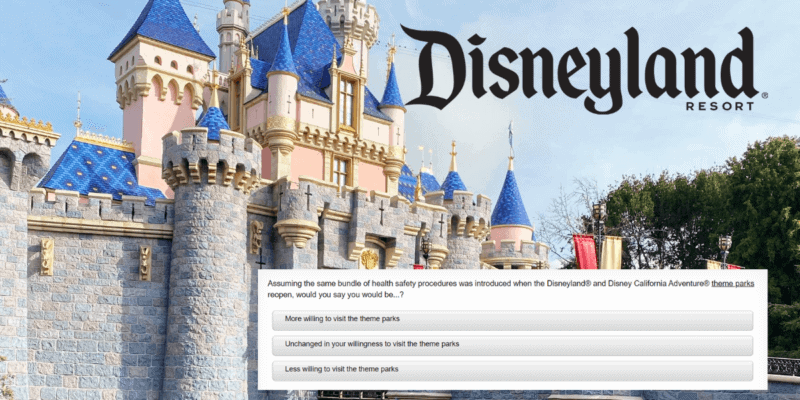 Disneyland Resort is surveying Guests after they visit Downtown Disney in order to not only ask about their experiences but also gauge their likelihood to visit the theme parks.

Guests are asked their purpose for visiting Downtown Disney District at Disneyland Resort:

Many of the questions ask about the health and safety protocol in place, asking Guests to rate their overall experience, how comfortable they felt with other Guests and Cast Members given the temperature check and face mask requirements, and how likely they are to return to Downtown Disney. Guests are also asked which restaurants they dined at, if any.

Below are some of the Downtown Disney-specific questions:

And below are the questions that are more closely pertaining to the reopening of Disneyland and Disney California Adventure:

Note that at one point toward the end of the survey, Disney asks Guests to describe themselves (and how big of a Disneyland fan they are):

At the time of this article’s publication, a reopening date for Disneyland and Disney California Adventure has not yet been announced. However, that doesn’t mean it’s not coming soon. Multiple statements made this week by Disney Parks officials indicate that Disneyland Resort is itching to continue its phased reopening as soon as Disney is given the green light by the state of California.

Josh D’Amaro told The Dow Report, “…we don’t have any California guidelines for opening. And as soon as a date and those guidelines are set, I can tell you we’re ready.”

Senior Vice President of Walt Disney World Resort Jim MacPhee also shared this week, “Disneyland has been ready to roll since July, awaiting guidance from the state Governor on what the reopening protocols would be.”

Also, note that this is not the first time Disney Parks and Resorts have surveyed Guests in order to ask questions pertaining to the parks reopening. Back in May after Disney Springs reopened at Walt Disney World Resort, Guests were asked about their willingness to return to the Disney World parks, which reopened around two months later. A more recent survey sent to Guests this July also showed some concerns. This is a common practice of Disney’s, so we don’t expect surveys like this to end anytime soon.

We’ll update Inside the Magic as soon as we have more information related to the reopening of Disneyland Resort. For now, we wish you a magical visit to Downtown Disney if you just want a taste of the Happiest Place on Earth.