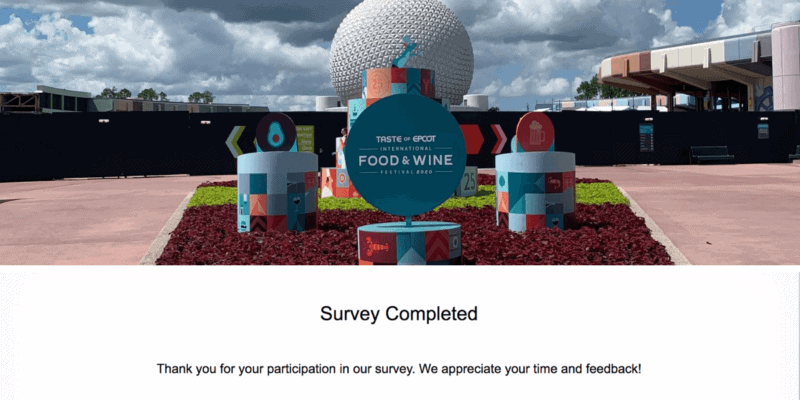 The Walt Disney World Resort continues to survey its Guests regarding their latest visits to the parks. But unlike the past surveys we have reported on, this last survey was less concerned about how their Guests rated their experience and more focused on the details of their trip.

Where did you come from, how did you get to the park, and who were you with? These questions appear to reflect the current concerns surrounding the global pandemic.

After visiting the mega-resort form July 17-19, 2020 (during which time I shared my experience with the modified character interactions and dinner at The BOATHOUSE®), I received a survey from Disney asking me essentially asked me the following questions.

“Where did you come from?”

The survey began with me telling Disney where I was from and providing my zip code.

These questions follows Florida, and several states upholding travel restrictions on those looking to visit Walt Disney World from out of state, and raises speculation that Disney is looking to discover if Guests from New York, New Jersey, and Connecticut are doing their two-week self-isolation before attending Walt Disney World.

The survey also wanted to know how I got to Disney World. Did I fly? Did I drive? Did I rent a car?

“Who was in your party?”

Walt Disney World also wanted to know several details about my party. The first question asked if I had any grandparents in my party, then they asked for the age of everybody in my party.

They also asked me how many people were in my party and if we all traveled together to the resort.

It has been reported that people of a certain age can be more susceptible to the global pandemic than others. One can speculate that Disney wants to get a sense of which demographics are returning to its theme parks because of those paralleling statistics.

“What did you do at Walt Disney World?”

The survey also asked me about my whereabouts while on Disney property, asking me to confirm where I went each day and how I got there. Which Parks did I visit? Did I use Disney Transportation? Did I drive myself? Or did I take some other third-party transport?

This question regarding transportation could simply be Disney trying to get a sense of people’s comfort in using its public transportation. But it could also be a way to Disney to track the level of possible exposure its Guests could have experienced.

“What else did you do in Central Florida?”

Disney also wanted to know if I did anything else while in Central Florida, asking me if I visited any other attractions or visited any public places like a mall.

It is far easier to speculate here that Disney wants to keep tabs on its Guests and the level of risk they had to possible exposure.

Related: How Visitors and Cast Members Feel About Disney’s Safety

Walt Disney World makes it clear to all would-be Guests visiting the theme parks that they are assuming all risks to possible exposure to the virus. They have also implemented a variety of health and safety policies, including mandatory mask-wearing, social distancing, temperature screening, and extra sanitation. No new cases have been credited to a Disney trip. But it helps to keep tabs on as many Guests as possible, just in case.