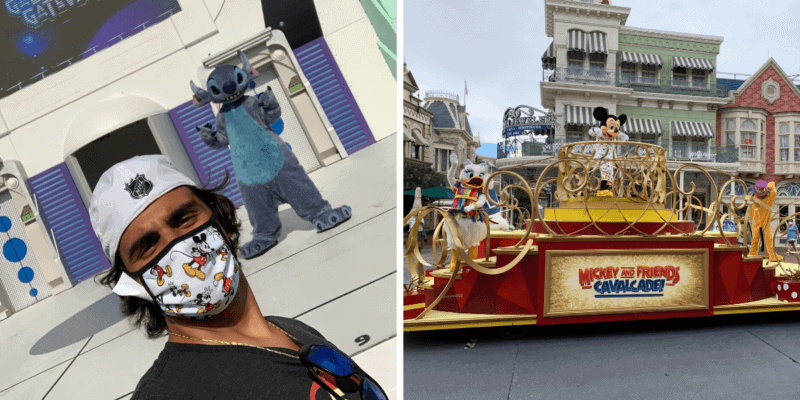 Character interactions at Walt Disney World have changed dramatically since before the multi-month closure, and, honestly, I think I like what they are doing now better than before.

I have now experienced Magic Kingdom park at both the Annual Passholder preview and after official reopening. I can confirm now that Annual Passholders did not receive any special treatment in their preview regarding character appearances, and I can say quite honestly that Walt Disney World has found a way to make character experiences even more magical. And despite everything, they help the park feel alive again.

First, let’s talk about the character experiences that I personally have witnessed in the parks so far. No more than 5 minutes after I entered the Magic Kingdom and started walking down Main Street, U.S.A., the horse-drawn trolley car began to make its way up to me with Piglet, Eeyore, and Rabbit on board waving at us as they passed. These three have also been spotted hanging out on the front porch of the Crystal Palace restaurant.

A little later, as I was walking through Frontierland, I saw some country bears hanging out on the second-floor balcony of their Jamboree right before another cavalcade began making its way down the parade route: a single-float version of the Move it! Shake it! Dance Party called Goofy’s Cavalcade which featured Goofy, Panchito, Jose Carioca, Max, and Claribel.

Going back to the hub to take an afternoon castle selfie, I stumbled upon the Disney Princesses coming down in the Kingdom of Dreams Cavalcade. Merida took the lead on horseback and was followed by a float of Princesses and Cinderella’s Fairy Godmother.

Then, after finishing my tour of the Haunted Mansion and leaving for the day, I found Cinderella’s stepsisters standing on the balcony outside the restaurant Cinderella’s Royal Table. They were mic’d-up and giving us a show. They were bickering back and forth and would include us in the improv as much as they could.

Walking through the Castle, I discovered another cavalcade working its way around the hub and down Main Street. The Mickey and Friends Cavalcade featured Mickey in the center with Minnie, Pluto, Donald, and Daisy.

I’ve also seen Stitch greeting guests from the Tomorrowland stage, and Tinkerbell making her way on top of her treasure chest.

Max, Clarabelle, and Rabbit three of the more rare characters that Guests seldom get to meet in the parks. I have been an Annual Passholder for most of my life, and I have only seen Rabbit out meeting Guests once ever, and it was during Mickey’s Very Merry Christmas Party.

Walt Disney World has a way of keeping certain characters a rarity. Surprising Guests with appearances or only bringing them out for extra-ticketed events. And while only a regular visitor to Magic Kingdom or character fan would appreciate this, it is just another example of how Disney is still trying to give its Guests the most magical experience possible.

You probably noticed I said “I found” or “I stumbled upon” a lot while listing the character appearances I experienced. Well, that is because that is how it happened. Disney World is not releasing the exact times for when the cavalcades come down the parade route or when characters will be sited in certain locations. Their reason is the same for why we no longer have full parades or fireworks shows — they do not want to incentivize their Guests to congregate together in ways that will not be conducive to social distancing.

Because now, when you go to Magic Kingdom Park, or any of the Walt Disney World theme parks now, you have no idea what characters you will see at any given time.

Yes, you read that subheading right. I really think that Magic Kingdom’s new character interactions bring it closer to those found–or would have found–at Disneyland park in California. There, the characters were found walking around the park and interacting with Guests on that spontaneous, natural level.

Our favorite characters are now either taking a ride or glorified stroll through the park, or just hanging out being themselves in their areas of the park.

At Walt Disney World, the character interactions were extremely rigid, in my opinion. Unless you stood to watch a parade or waited in line for a meet and greet, you were not going to see any characters. Now, the characters come to you. You have a chance to get a personal interaction from a safe distance all around the Magic Kingdom at any time of the day.

Gain a Deeper Appreciation for the Characters

Magic Kingdom Guests no longer have to queue up to see their favorite characters. In the pre-pandemic days, the wait time for meet and greets at Princess Fairytale Hall in Fantasyland could sometimes reach 300 minutes. That’s five hours, more than half your day at the Magic Kingdom.

I understand that for some Guests–especially other little princesses–that is the only reason they are in the Magic Kingdom, and I understand that even though the wait was 300 minutes, you were guaranteed the chance to see your characters.

While the possibilities of seeing your favorite characters throughout the park have exponentially increased, there is no guarantee you will be in the right place at the right time.

No, we can’t go give Mickey a hug right now, we have to save our burning questions for our favorite princesses for another day, and our autograph books are not going to get any fuller. But I believe that Magic Kingdom Guests–especially Annual Passholders–will gain a deeper appreciation for character appearances.

Instead of complaining about how it is so much less personal than a traditional meet and greet, Guests will be swept up in just seeing their favorites in ways they have perhaps never seen them before.

The modified character interactions are also more freeing for Guests. They give you that smile and wave without you needing to wait in that line or holding a spot for a show or parade. The entire rest of the day is now open to you, including the chance to see your favorite characters again.

There will come a day when we can have character meet n’ greets again, but I hope that Disney keeps some of these other experiences going. Because despite the limited crowds and shop closures, they make the park feel more magical and alive.

If you are planning your trip back to the Magic Kingdom, our friends at Academy Travel are standing by ready to use their expert guidance to help you plan the most magical vacation for your budget. Click here to learn more and receive your free, no-obligation quote today.