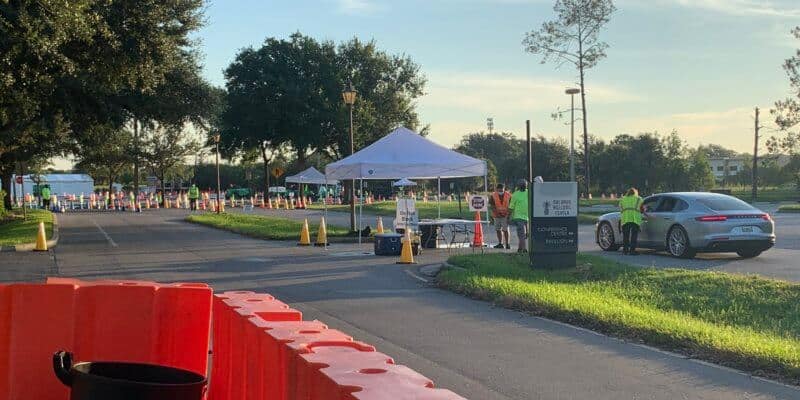 A new COVID -19 testing site has opened on Walt Disney World property, and it appears to be open to everyone.

According to the Orlando Sentinel, the testing site on Walt Disney World property officially opened to the public on the morning of Friday, August 14, with a special lane specifically for Cast Members.

The news was also shared on Twitter by FOX35 reporter Jessica Albert who said “A #COVID19 testing site has opened up on @WaltDisneyWorld property this morning. The company says there will be a lane dedicated to cast members. You need an appointment to be tested here.”

A #COVID19 testing site has opened up on @WaltDisneyWorld property this morning. The company says there will be a lane dedicated to cast members. You need an appointment to be tested here. @fox35orlando @GoodDayOrlando pic.twitter.com/AwXxXNTqSY

The opening of the testing site comes days after it was announced Walt Disney World would provide testing to Cast Members and their families.

The Florida State Emergency Operations Center confirms that the site is located near Disney’s Animal Kingdom theme park at 3010 Maingate Lane in Kissimmee is open from 7 a.m. to 4 p.m. daily and open to anyone over the age of 2. Click here to pre-register.

This story development comes after it was reported on August 12 that Disney World would open beginning August 17 and that it would only be open to Cast Members, employees, and their families. Not only did the site open three days earlier than originally anticipated, but it will also be open to all who can make an appointment.

Disney’s decision to provide testing ends a lengthy dispute between it and Actor’s Equity Association, the actors union who represents many of Disney World’s stage-performing Cast Members.

But Disney officials issued a statement saying that the dispute with Equity had nothing to do with their decision: “We have offered the location to help with community testing. The Florida Division of Emergency Management will operate the location which is available to Cast Members and their immediate families as well as Florida residents. Any suggestion that this has been done as a result of any one union is unfounded. Our actions support all cast and our community at large.”

Regardless of the reasoning, there is now a testing site open on Walt Disney World Resort and it is the latest way the mega-resort has strived to improve the safety of its Cast Members since its reopening.