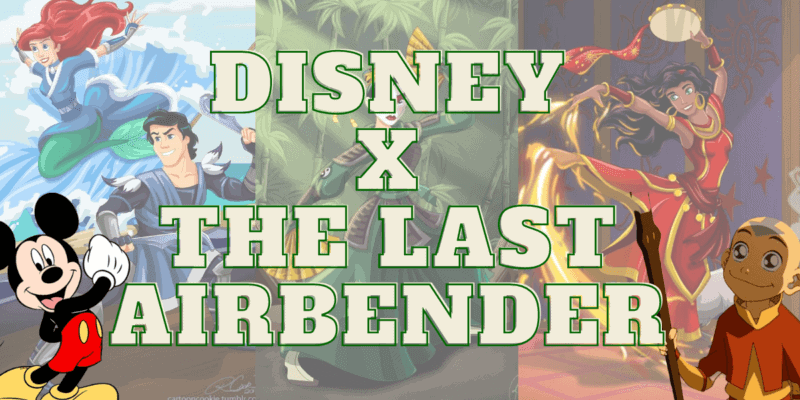 Disney and Avatar go together like peas and carrots. No, we don’t mean Disney‘s Animal Kingdom and the James Cameron movie rides like Flight of Passage and Na’vi River Journey. We’re talking Avatar: The Last Airbender. Artist Robby Cook (@Racookie3) has drawn Disney characters as Avatar counterparts and we just can’t get enough of them.

Check out your favorite Disney characters as benders and other warriors in the world of Avatar: The Last Airbender!

The Little Mermaid‘s Eric and Ariel make the perfect waterbenders

Robby certainly has the right idea when bringing this aquatic Disney princess and her handsome husband to the world of The Last Airbender.

This Disney Princess certainly hears the colors of the wind as she channels them into amazing air bending powers.

If only Aang or Korra had met this water bending master along their travels. You can rest assured she’d definitely know how to ice bend too!

Mulan as a Kyoshi Warrior is everything we need

When it comes to inspiring stories there’s none better than that of Mulan and Avatar Kyoshi. This character is the first not to be from a clan of elemental warriors, but don’t underestimate this powerful all-female tribe.

This is another one that the artist has just nailed on the head. The mistress of evil had to be a fire bender, and channeling Mark Hamill’s Fire Lord Ozai is just super cool.

Not all fire benders are evil. Like Prince Zuko, Esmerelda proves that some can be good by showing off her dance moves and firing off some epic elemental action.

Related: Which Disney Princess is the best Role Model? Hint: It’s Not Mulan or Elsa!

Another classic non-bender character is Mai, the trusted friend of Princess Azula. Hercules‘ Meg is perfect as this knife throwing villain-turned-hero and this artist knows it.

BONUS: The Disney Dads as the Order of the White Lotus!

Ok, this one is just too good. The Order of the White Lotus represents some of the most powerful elemental warriors as well as non-benders in the world of The Last Airbender. The wise old Disney dads are perfect for this role! We especially love King Trident and Fa Zhou.

Be sure to check out Robby’s work on Facebook or Tumblr.

What do you think of these Disney characters as Avatar: The Last Airbender counterparts? Let us know in the comments below.