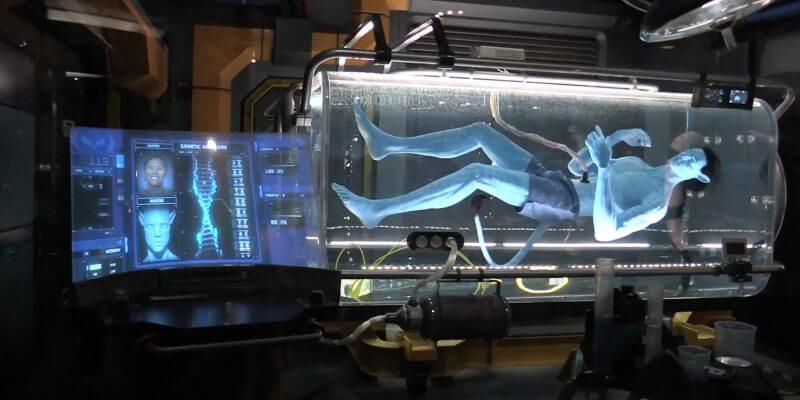 On April 29, 2017, Walt Disney World offered Inside the Magic an early preview of their work of genius, Pandora – The World of Avatar. Among breathtaking views of majestic mountains and vivid vegetation is the headlining attraction, Avatar Flight of Passage.

In the outside portion of the queue, you are taken in by spectacular sights with cascading waterfalls and boulders that appear to float above your head, but the real story begins when you enter a series of caverns that take you deep into the mountains of Pandora. 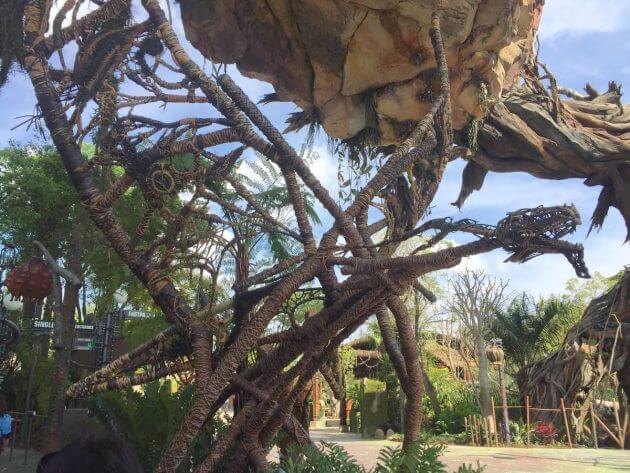 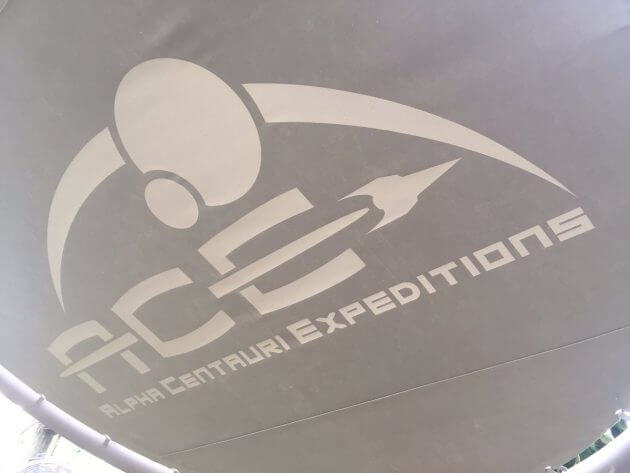 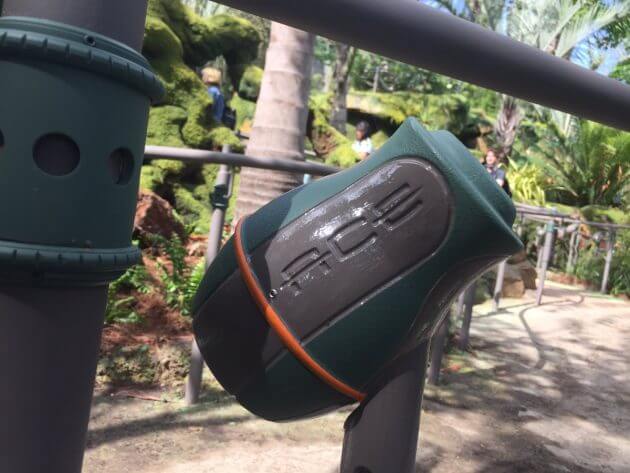 The initial walk into the caverns introduces many drawings of the Na’vi, the native inhabitants of Pandora. In the drawings, we begin to understand the intimate relationship between this species and another – the Banshee. 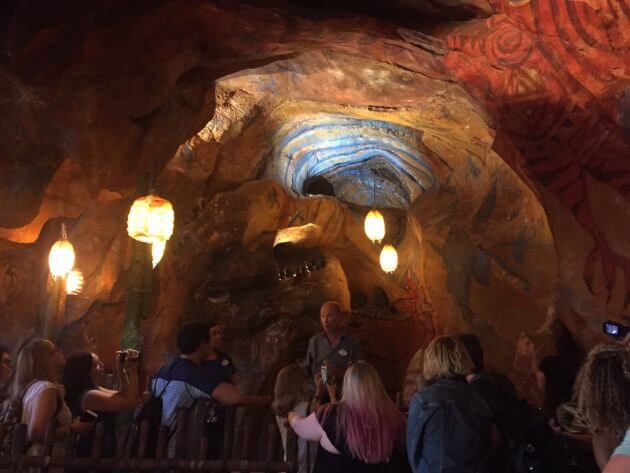 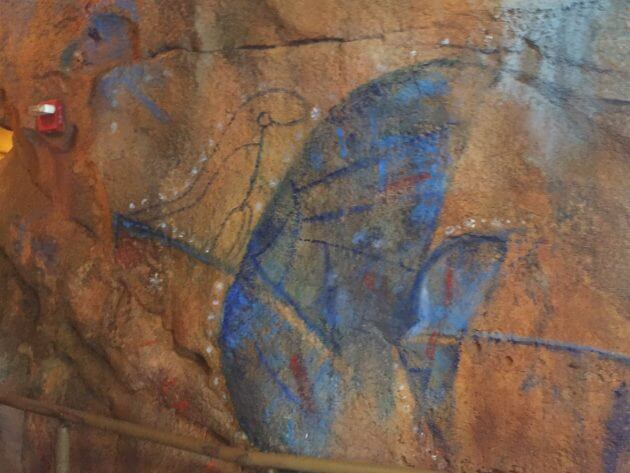 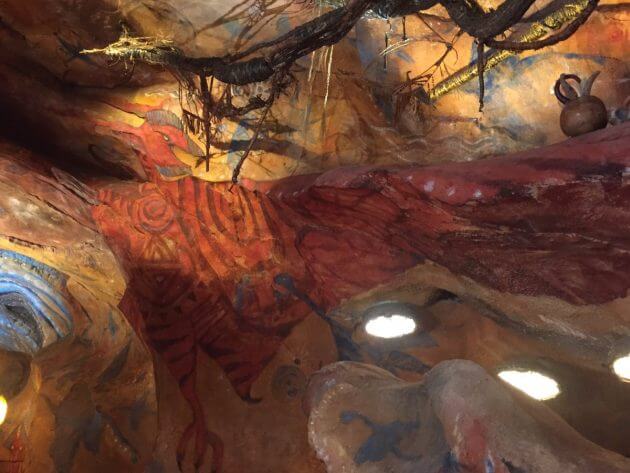 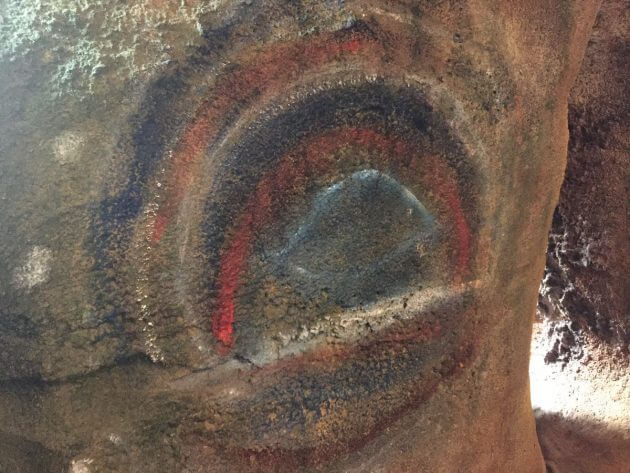 Banshees serve a special purpose in Na’vi culture. The connection with one marks a milestone of maturity in the life of each Na’vi. Once a Na’vi has been able to find its Banshee companion, the two link for life. It’s a relationship being closely studied by humans (which brings us to the next part of the queue).

Abruptly, the caverns empty into an industrial facility that has been carved into the mountain. Nature and man collide with force. And here, Disney’s attention to detail arrives with just as much force, offering a complete immersion into this exciting world. 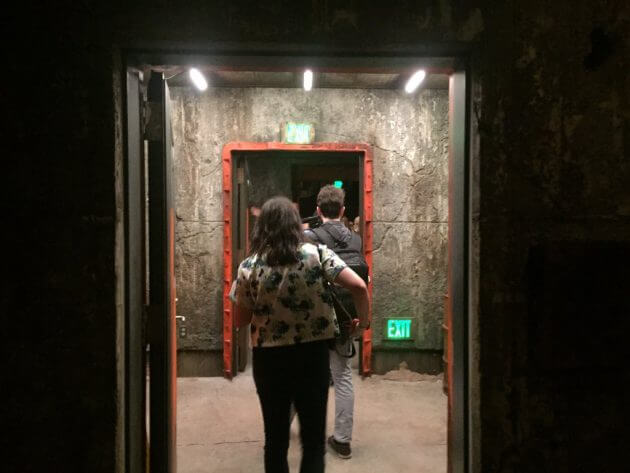 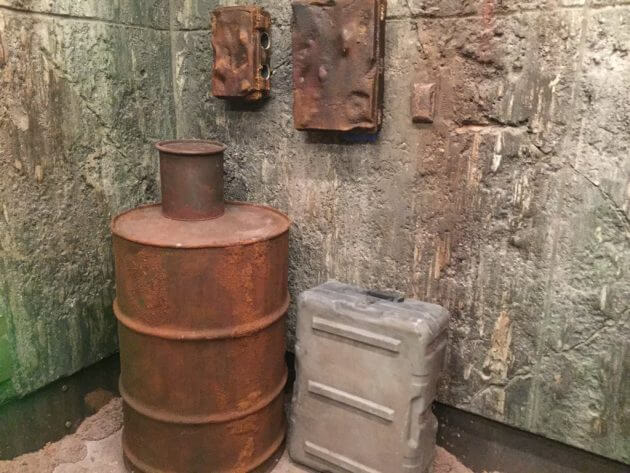 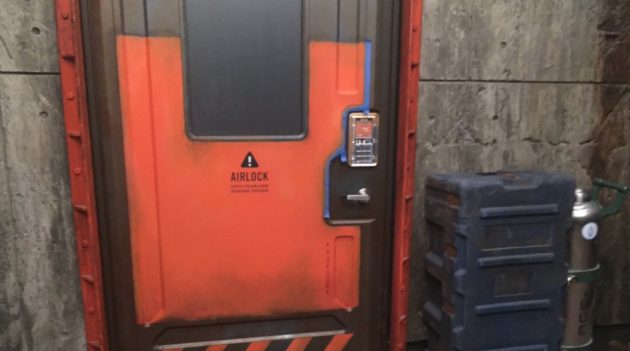 Around every step, it is easy to completely lose yourself in the impressive world Disney has created here, removing all perception of the outside to drive the story forward via the scenic elements in each of many sequential rooms. It’s a maze of thought-provoking design.

This location is where the Resource Development Administration (RDA) used to conduct questionable activities. In this facility, there are still traces of the toxic experiments that used to be conducted.

But this harsh environment eventually leads back into the bioluminescent forest, and we see how nature is reclaiming what was hers. Glowing overgrowth appears to be slowly spreading over previously putrid areas, and it is all now under the watchful eye of the Pandora Conservative Initiative. 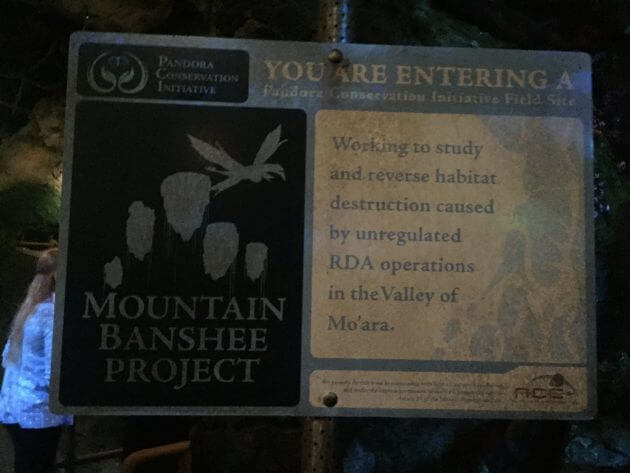 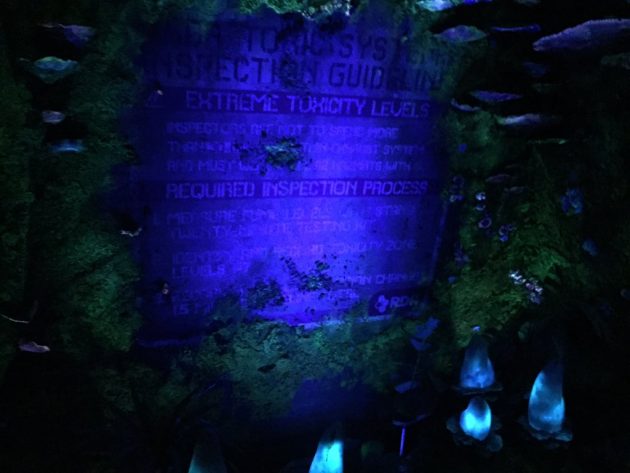 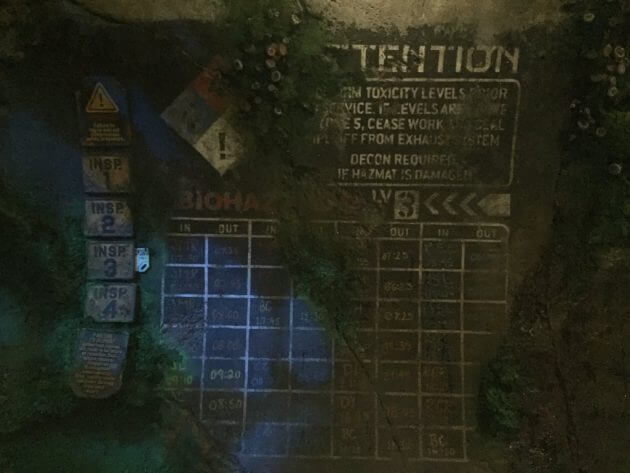 The story in the queue progresses as the forest leads us to the Pandora Conservative Initiative’s research center. Once an RDA asset, the building has been repurposed to study the link between the Na’vi and the Banshee. There is a gigantic mural with life-size Banshees and Na’vi that gives perspective to the enormity of these races, but the incredible queue pushes this story along as you delve even deeper into the research facility. 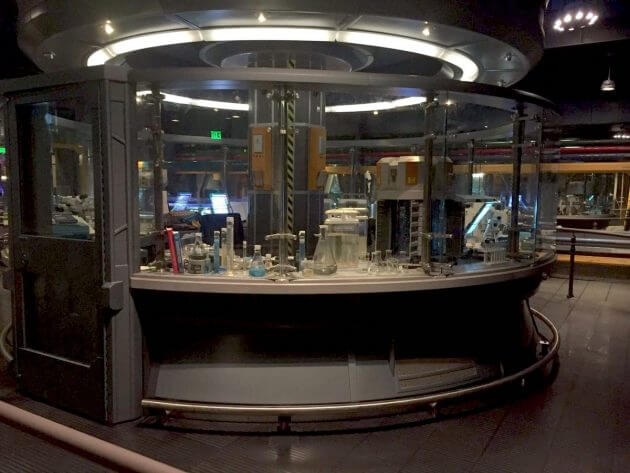 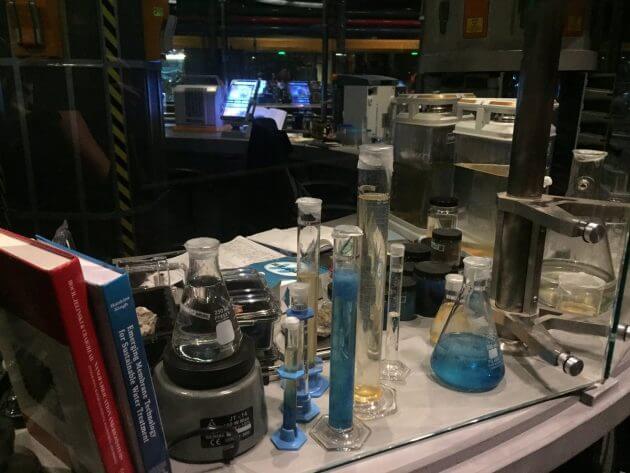 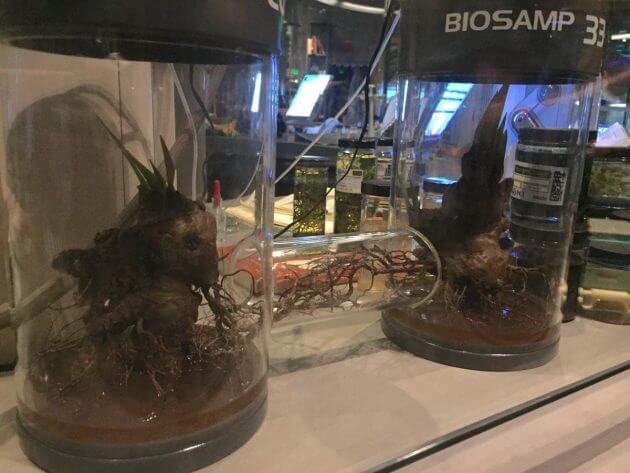 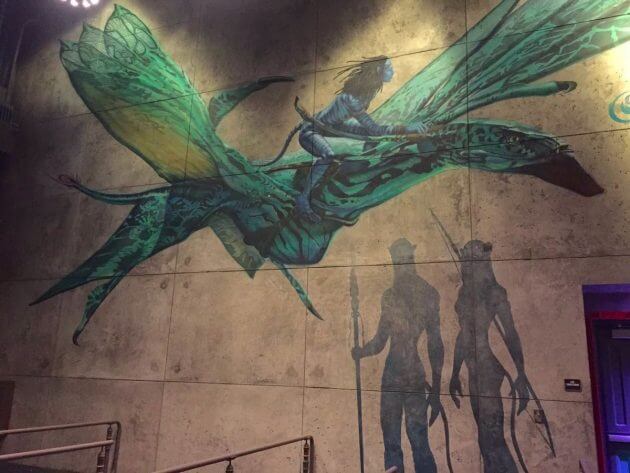 The lab is both fascinating and overwhelming. There is so much to look at – that’s worth looking at – that you’ll hope the line doesn’t move quickly so you can take it all in. The movement from a dilapidated military facility to a beautiful, overgrown, bioluminescent forest which then leads to a perfect, clean modern lab leaves you disoriented in the best way possible. It’s intentional, designed to leave you wondering what surprises come next.

In this case, the big surprise is turning a corner and seeing an actual Avatar floating in a chemical bath. It’s arguably Disney’s most lifelike character creation to date and will leave you stunned.

Various other oddities that change shape and texture are on display in the lab as well, which are quite entertaining to watch slither around. You can easily get lost in all of these many details, and yet you are pulled further once you understand that you will get a chance to experience the relationship between a Na’vi and Banshee via linking to an Avatar. 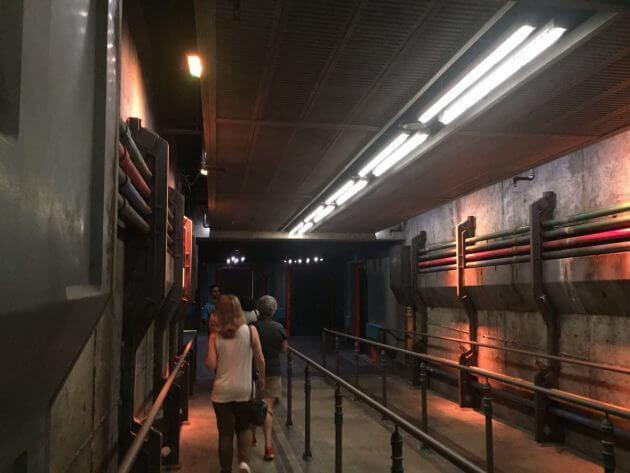 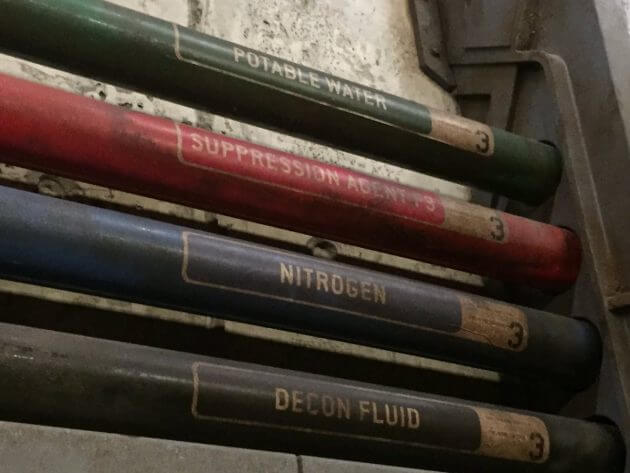 Moving forward into the facility, groups of 16 people are moved into smaller pre-show rooms where it is explained that by matching portions of an individual’s DNA with that of Avatar prototypes, humans have the ability to briefly link with a Banshee and explore Pandora from a perspective they would never otherwise have – from high above. 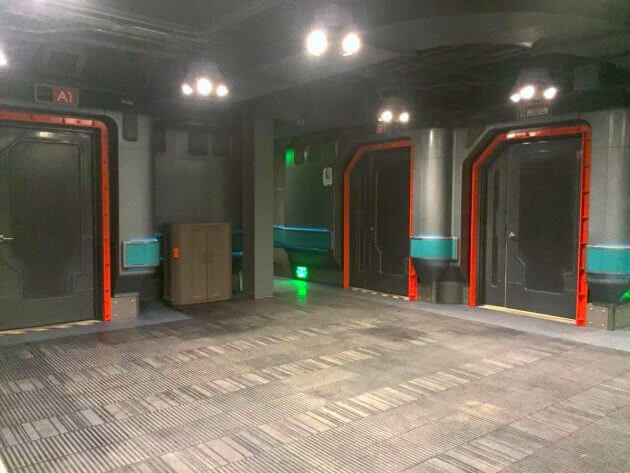 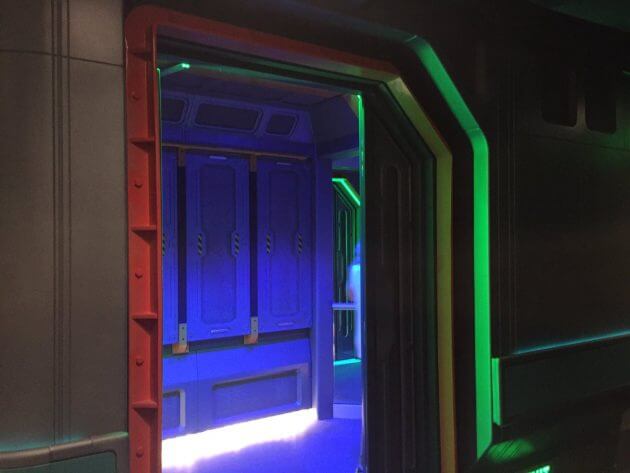 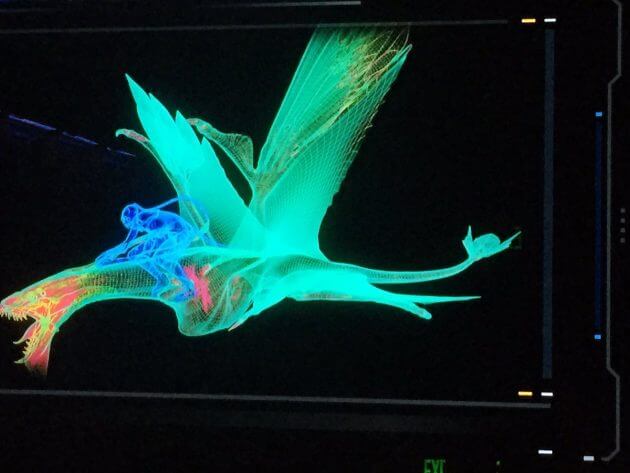 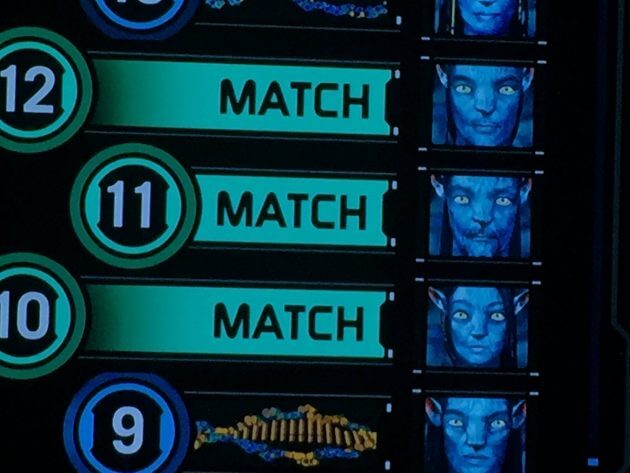 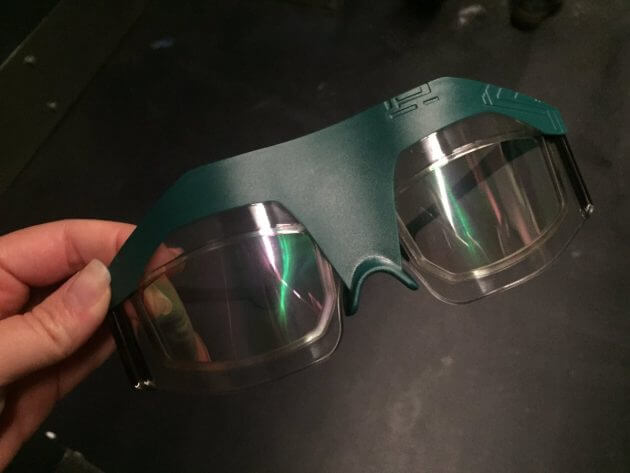 After a series of amusing and slightly interactive elements that match you to an Avatar prototype, you are asked to straddle a “link chair.” This is what, as the story goes, will connect you for your flight.

You climb on like a bicycle, which positions you forward and quickly locks tight on your body and legs. Via this “vehicle,” you receive realistic sensations throughout the ride that help suspend disbelief and make you think – and quite literally feel – that for a few minutes you actually are sitting on the back of a majestic and terrifying flying creature once the simulation begins.

You feel vibrations that imitate electric pulses as you are being linked to your Avatar and you experience the sensation of your Banshee breathing as you “sit” on its back. These small details elevate what could be “just another” 3D simulator screen-based ride. 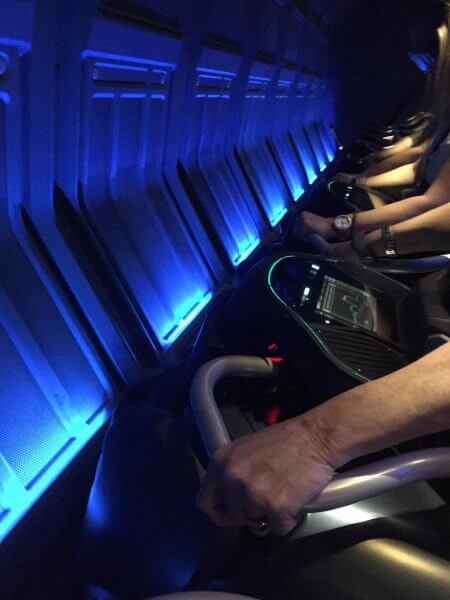 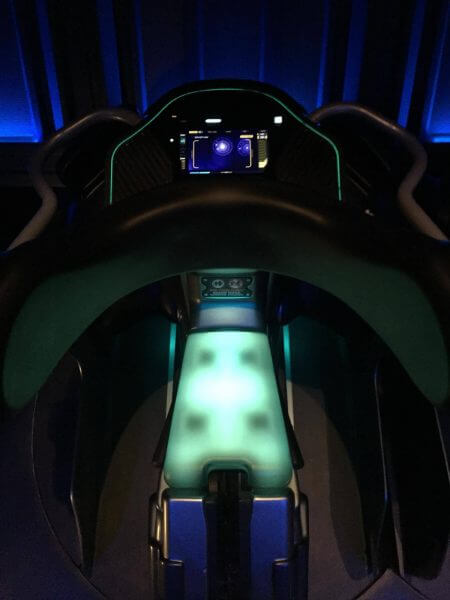 The actual flight is centered around beautiful visuals.

Using the technology that we know from Disney’s Soarin’ attraction and many elements we are familiar with (distinct smells and quite frequent misting effects), Avatar Flight of Passage is still able to bring us a new take with its precise simulation and breathtaking vistas.

The rushing wind matches perfectly with different speeds during your flight. The movements of the seat are perfectly in sync with the screen’s footage, so even motion sickness-prone individuals may be able to clear without issue. (I am one of those people.) The experience is genuinely moving.

You fly around the floating mountains, past many other Na’vi, across an ocean, under a wave, and wind up with a beautiful sun-soaked overview of Pandora. This is a sight-seeing flight from another world.

I felt like Sebastian on the back of Falkor in “The NeverEnding Story.” When my flight ended and I “disconnected” from my link chair, I was instantly ready to go back.

I visited a place of complete fantasy, but it felt so real. The beauty of it is something not easily shaken. If you allow yourself to become part of the story, by the end you will not only feel like you have flown, you will feel like you have truly connected to this world.

Pandora – The World of Avatar officially opened at Walt Disney World on May 27, 2017. Avatar Flight of Passage is still one of the most highly-sought after FastPasses at Disney’s Animal Kingdom and there are often long waits in the standby line. If you’re unable to score a FastPass+ reservation, we recommend heading straight for this attraction when the park opens to grab a spot in the standby line.

Other things to note, per Disney:

Planning a trip to Pandora? Contact Academy Travel for help booking your next magical Disney vacation.