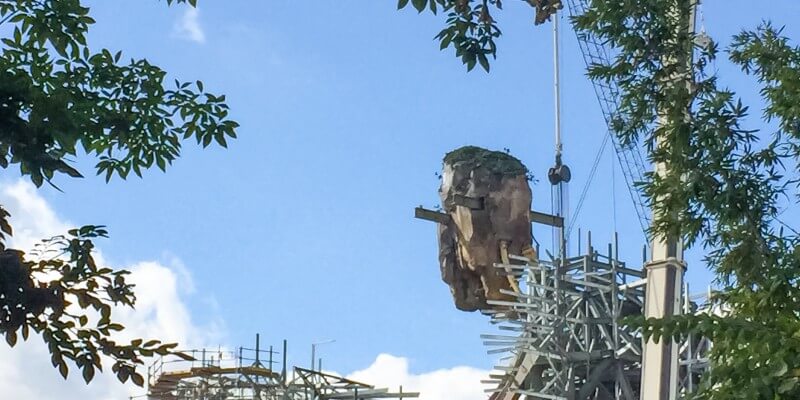 Since the full model debuted at the D23 Expo this past summer, we’ve been anxiously awaiting visible signs of progress on Pandora: World of Avatar at Walt Disney World’s Animal Kingdom. The concept drawings were great, the model was fancy, but seeing the first of the floating mountains rise above Animal Kingdom is definitely an impressive sight.

Below is a conceptual sketch of the floating mountain range, along with an image showing Tom Staggs, Joe Rhode and James Cameron alongside the model. The early weeks of November have proven to finally give way to the first in a series of complex structures that will make up the floating mountain range of Pandora, as seen in the 2009 blockbuster film. Crews have been working feverishly on the immersive land that is scheduled to open in 2017. Since the groundbreaking, the only sights to be seen were the uprising of maniacal forms of twisted steel beams and the upper portions of show buildings.

Though it may seem small, or large to the eye through pictures and videos, take our word that it’s huge. When driving into the main parking lot of Animal Kingdom, the peak of this mountain looks to be on the same horizontal level as Expedition Everest. What will be housed under the floating mountains is anyone’s guess. That information is still locked away, with the imagineers still being tight lipped about the immersive details that we’ll find upon completion.

We’ll keep updating you as progress continues, showing off as much of the detail we can from the the visible guest areas in the park.