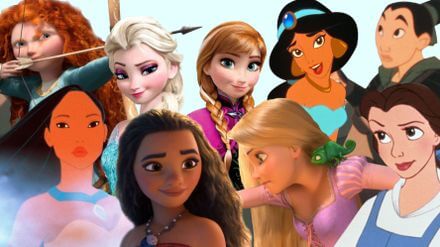 Which Disney Princess is the best role model? Out of all the Disney Princesses and heroines, how can you pick just one? Disney’s leading ladies all have qualities that continue to inspire us year after year, from Snow White’s unapologetic kindness to Jasmine’s determination. But there’s one Disney Princess role model who is a cut above the rest.

YouGov conducted a research study originally to answer the question of whether audiences were ready for a gay Disney Princess — following the trend of fans hoping Elsa would be gay in  Frozen 2. But within that study, they also asked a question that we’ve been wondering for quite a while: which Disney Princess is the best role model?

They found some pretty interesting results. As you can see in the graphic below, the one and only Moana (from the 2016 Walt Disney Animation Studios film of the same name) placed first, with Mulan in second place (she’s a warrior who saves China, after all) and Merida in third (nobody inspired us to change our fates more than her!). Note that the study included Disney leading ladies that aren’t technically part of the official Disney Princess lineup (i.e. Anna and Elsa from the  Frozen franchise). 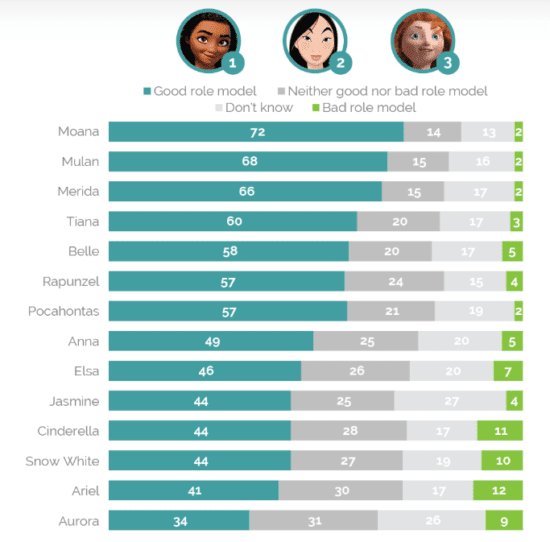 Disney’s depictions of its princesses matter because the movies are aimed at young children of an impressionable age. In fact two-thirds of Britons (67%) say that it is important for Disney princesses to be good role models for young girls.

Much has been written on whether and which Disney princesses are good or bad models. But which princesses does the British public think are the best role models?

The three Ms top the list: Moana, Mulan and Merida. Among those who have seen the princess’s respective movies, 72% consider Moana to be a good role model, while 68% say the same of Mulan and 66% Merida.

As Moana fans, we admit we don’t disagree with the votes here. Moana is smart, strong, independent, and kind. She does everything she can to save her family, people, and island, and she does so with confidence even though she has to face her fears. Though she initially disobeys her father’s wishes, she ultimately proves to not only everyone but also herself that she is capable of achieving much more than what was thought possible.

Related: A Former Disney Princess Tells All On Her Magical Backstage Rise To The Top

Moana is by far a fantastic role model not only for young girls but for all children and adults alike. She’s not longing for a Prince Charming or a damsel in distress waiting for true love’s kiss (although there’s nothing wrong with wanting a movie-worthy romance!). But instead, her journey is more about self-discovery and finding the strength within us to carry on and achieve our goals.