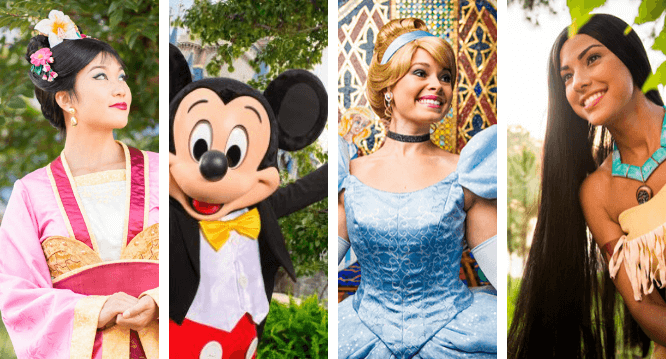 What is it like to Paint with the Colors of the Wind every day? Or to encourage your fellow humans to blossom like a cherry tree? Perhaps they are waiting for their personal glass slipper or honey pot to come their way? Disney Princesses and characters alike bring happiness, hope and cheer to our lives, especially if you are a Parks Lover like we are at Inside The Magic.

Kristen Sotakoun is a former Disney Cast Member who is letting out some of her learned trade secrets and an insight into her training over her four-year employment at Walt Disney World Resort. This former Disney Princess tells all as she looks back on all her wonderful memories in the Most Magical Place on Earth.

When Sotakoun was only 18 years old, she transitioned to a Cast Member via the Disney CareerStart programs. The company was looking for youths to employ at the Disney Theme Parks and came to visit her Illinois high school. Sotakoun knew immediately this was for her, and her mom cheered her on to try it for a while. She went through a fast and furious training session for each character she portrayed in the entertainment division of the company. Tunneling through the Utilidors, Sotakoun would prep each day for her turn as Mulan or her first “fur” character, Winnie the Pooh.

Kristen Sotakoun is actually half Laotian and half white but had the facial structure Disney then deemed appropriate for Pocahontas and Mulan. She has no Native American or Chinese heritage and recalls that out of eight ladies she knew to be “friends with Mulan,” not one of them were Chinese. While Sotakoun hasn’t worked for the Magic Kingdom in over 10 years, she acknowledges that the Parks have come a long way in viewing culture, race and more appropriately casting characters.

The Disney Princess in Training

This former Disney Princess remembers the days before her Meeko meet and greet. Wearing khaki shorts in the utilidors, the Peter Pan character walked by her and she froze. Feeling like the characters were magic personified, she wanted “to be where the people are!”

No one really starts out as a Princess… you’ve got to do your chores first! Within the CareerStart program, Sotakoun worked in the Honey, I Shrunk the Kids playground to start out.  She remembers it as a “glorified babysitting” session of guests and yet still a lot of fun. At the end of her 3-month program, Disney management pulled her aside for entertainment auditions. Shortly after those, “they pulled me after the audition and told me I would be Pocahontas.” As we mentioned above, Sotakoun had ZERO Native American heritage, being half Asian and half white. But after donning a costume and reading pre-written lines, “They took pictures of me, and they said, ‘You’re in!'”

Once her short training stint actually started, Sotakoun was first taught the ways of various Disney characters. She had to learn what to do and what NOT to do. She had to learn all the different autographs like Mickey Mouse, Minnie Mouse and Pluto’s signature paw print, and how to recreate them. Often times, just the gloves and headpiece were used in training to get the feel of using them.

Later on, she recalls training as a character at Disney World with attendants over just a few days, which seemed to her, incredibly short.  Later on, when “face” training started, it was a dedicated two full days of training for each Princess. After all, there’s lots of work to be done, but in every job that must be done, there is an element of fun (as Mary Poppins would say)! Sotakoun spent the next three weeks hosting around everyone’s favorite Hundred Acre bear, Winnie the Pooh, as she met with Disney Parks Guests.

On Kristen Sotakoun’s first day as a “face” character, the former Disney princess remembers her work at EPCOT. Once she stepped onstage, Sotakoun remembers thinking, “Oh, my god… It’s weird, I got so nervous.” She actually didn’t pass her first round of Disney Princesses training since she was so caught up in the moment.  This can often happen for Cast Members not trained in improv or theater, as breaking the fourth wall and interacting with infinite guests and situations can throw off even a seasoned and trained character employee.

This Princess Is Tough, Too

Sotakoun reveals that it’s not all rainbows underneath Cinderella Castle. Her memory recalls times of sobbing children, fearing the real-life suddenly huge Winnie the Pooh.  During her first gig as the honey bear, Sotakoun told Vox how she dealt with crying kiddos. “As Winnie the Pooh, I would cover my eyes and turn away like I was scared. You can engage the situation and be within your voice.”

She also had bad days, just like the rest of us “normal folk.” During her four year reign, the Princess sometimes didn’t want to go to work, just like us! But when she sat up and thought about it, she had to remind [herself] that [she] was saying, “I don’t want to put on makeup and hug kids all day.” And isn’t that the truth? We here at Inside the Magic can’t imagine how rewarding it must be to have herds of Guests lining up to see you, to interact with you, and to take home a souvenir photo or signature from you. That’s an overwhelming sense of worth and community!

And speaking of community, Cast Members band together through thick and thin. Just like any other job, Sotakoun remembers Disney Princesses of all types getting ready together and swapping stories in the Disney World dressing room, including one of a Cinderella character discussing her recent plastic surgery operation. “I was Silvermist the Fairy at Magic Kingdom and Toon Town. The fairies share their break room with the princesses as well, so it’s one big break room. One of the Cinderellas was like, ‘Guys, I just got a boob job!’ And then Belle, was like, ‘Okay, not to be weird but can I feel it?’ [The girl playing] Cinderella says, ‘Go ahead!'”

As strange and bizarre as some of these stories may be, landing a gig as a Disney Princess at the Disney Parks is clearly no easy feat, nor is it an easy job. Just like any other task, it has various challenges. But we can only imagine how incredibly rewarding the results are, day after day. And years later, think of the stories (like these) you could share!!

Are you wanting to audition to be a Disney Cast Member? Leave us a comment about which Disney World or Disneyland job you would want!