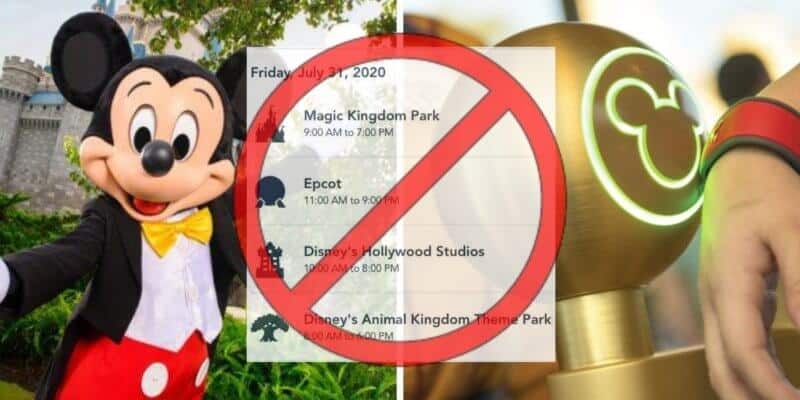 With the reopening of Disney World came several changes including the requirement of wearing a face mask, social distancing measures put in place, plexiglass put up in several areas of the park, and perhaps most importantly, limited capacity.

Between the limited capacity and travel restrictions in place for many, as well as some not feeling safe to travel during this unprecedented time, Disney World is not making as much money as they were prior to the temporary closures (for obvious reasons).

However, there are some rumors floating around that Disney World could possibly follow through with in order to help save some money in operational costs.

Right now, the park hours aren’t nearly as long as they were prior to the park opening. For example, Disney’s Animal Kingdom is only open until 6:00 p.m. in the month of July, closing a bit earlier than normal.

In order to help cut operational costs, could we see Disney cut back on park hours even more? Well, it is a possibility but there has been no word from The Walt Disney Company regarding this at this time. However, the Walt Disney World website always states that park hours are subject to change.

Another rumor floating around is that Disney World could close certain parks on certain days to help cut operational costs. For example, could we see Magic Kingdom and Disney’s Animal Kingdom only operating on a Monday, Wednesday, Friday, Saturday schedule while EPCOT and Disney’s Hollywood Studios operate on Tuesday, Thursday, and Sunday?

While this is a possibility, Disney has not yet commented on this sort of schedule or change happening anytime soon. But it is something to keep in mind if Walt Disney World is looking for ways to cut operational costs.

What We Already Know

Suspension of Nighttime Fireworks and Show

We already know Disney has not only kept safety as the number one priority, but they also have been saving on operational costs by not hosting nightly fireworks or nighttime shows at any of the theme parks. Within the reopening plans, Disney shared that in order to keep crowds at a minimum, the parks will not be hosting shows such as Happily Ever After in Magic Kingdom or Fantasmic! in Disney’s Hollywood Studios.

If you are missing these nighttime fireworks shows, Disney recently released videos of the fireworks spectaculars as part of their Disney Magic Moments segment. You can also watch a video of Happily Ever After on our YouTube page here:

We also already know Walt Disney World made the difficult decision this year to not host Mickey’s Not-So-Scary Halloween Party — a popular after hours event that takes place every year at Magic Kingdom. This is also an area where Disney World is losing money, as the company is not selling tickets to this event.

If you had plans to visit Mickey’s Not So Scary Halloween Party this year and are disappointed with the cancellation, you can still get your fix by watching the popular Boo To You parade here:

If you plan on visiting Walt Disney World Resort, there have been safety protocols and several other changes put into place to keep Guests and Cast Members safe. Social distancing measures have been put in place, excessive cleanliness, encouragement of mobile orders, plexiglass, and as we previously reported, the elimination of character meet and greets. Also being eliminated from the parks are parades and fireworks along with other similar entertainment that draws a crowd, and much more.

Guests will also need a Disney Park Pass reservation in order to visit one of the theme parks, which you can read more about here.

What do you think of these possible changes? Let us know in the comments below.