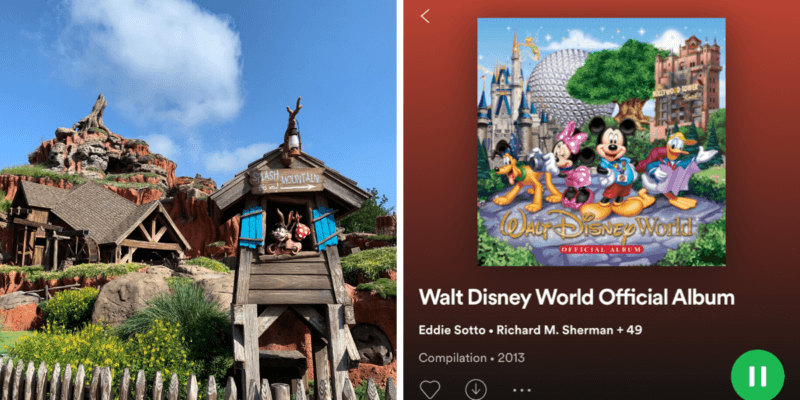 For those Guests who will not be able to make it back to Walt Disney World any time soon, you can listen to the Walt Disney World Official Album on Spotify. It features all the iconic songs and audio one would hear in the theme parks from the music you hear playing down Main Street, to the Twilight Zone Tower of Terror Theme and everything in between. Well… almost everything.

We at Inside the Magic have confirmed that the Splash Mountain ride medley is no longer available on the album.

This removal is easily connected with the recent controversy over the ride’s cinematic roots and Disney’s announcement to retheme the attraction from Song of the South to The Princess and the Frog. However, we also found that The Adventures of Winnie the Pooh ride audio is also unavailable. Considering no controversy hovers around Pooh Bear, this puts into question the real reasoning for Splash Mountain’s disappearance.

But this is not the first time Splash Mountain’s imminent end and transformation into a ride themed after The Princess and the Frog has been noticed. We at Inside the Magic have reported that shopDisney sold out of Splash Mountain merchandise shortly after the retheme announcement was made, and yesterday we covered that Annual Passholders flooded the Splash Mountain gift shop for whatever merchandise was left.

There is still no word yet on when Splash Mountain will close for its refurbishment, and it will be open with the Magic Kingdom reopening. So, fans will get the chance to visit Brer Rabbit, Brer Fox, and Brer Bear and barrel down Chik-a-pin hill one last time.

Read More: Splash Mountain to Be Rethemed to ‘Princess and the Frog’!

While Spotify removed the entire Splash Mountain medley and character audio, it leaves this writer asking one question: What does this mean for the fate of “Zip-a-dee-doo-dah”?

What do you think about Spofity removing Splash Mountain from its Disney World album? Do you think it’s justified? Why or why not? Let us know in the comments!