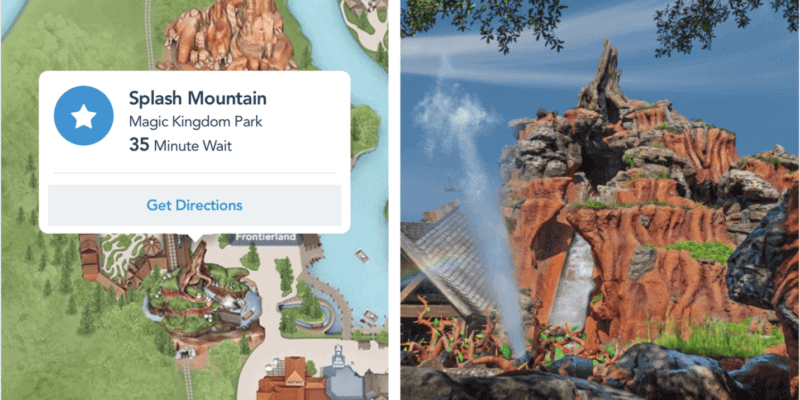 We recently checked wait times for popular attractions and can report that Splash Mountain has the longest wait of any ride during the Magic Kingdom Cast Member preview day. It is currently at 35 minutes, but has reportedly been even longer at some points during the day.

To put Splash Mountain’s current wait time in perspective, other available rides and attractions, including classic Disney rides like “it’s a small world,” Haunted Mansion, and Peter Pan’s Flight, have average wait times under 15 minutes during the Magic Kingdom preview.

It is worth noting that Big Thunder Mountain Railroad also has a relatively long wait time (by today’s standards) of 30 minutes. This could be due to its close proximity to Splash Mountain. The two Disney World rides are both located in Frontierland.

The popularity of Splash Mountain during today’s Cast Member-only Disney World reopening preview is likely due to the recent retheming announcement. Cast Members are likely trying to ride the iconic Song of the South themed log flume one last time before it undergoes its Princess and the Frog transformation.

This begs the question of how these Walt Disney World Cast Members actually feel about the Splash Mountain retheme, which has been controversial among Disney Park fans online.

Over at Disney’s Animal Kingdom park, ride wait times during the Cast Member preview are also significantly shorter than usual. Of particular note is the fact that Flight of Passage in Pandora: The World of Avatar had just 5 minute wait at one point!

Typical standby time for the Avatar attraction is often over an hour. Remember, there is currently no FASTPASS service available in any of Walt Disney World Resort’s four theme parks. There will, however, be a limited number of guests in each park on a daily basis.

Just out of curiosity, I decided to check the wait times on the My Disney Experience app, and the wait for Flight of Passage is currently at 5 minutes. pic.twitter.com/y6rRCQxGhe

What do you think about the Disney World Cast Member preview wait times? Tell us your thoughts about Splash Mountain having the longest line!

Watch for our coverage of the Annual Passholder preview later this week, including information about whether or not a boarding group will be required for Rise of the Resistance at Disney‘s Hollywood Studios upon reopening!