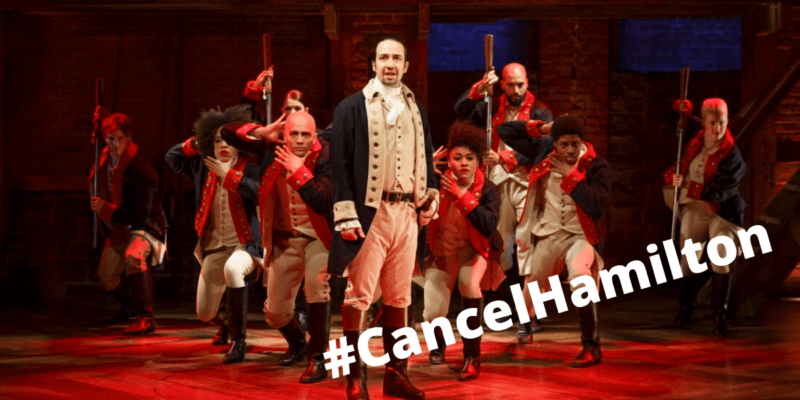 It has been less than a week since Lin-Manuel Miranda’s award-winning Broadway musical, Hamilton, was released onto Disney+, and people are already taking to social media demanding Disney take it down. The reasons being that the musical showcases America’s Founding Fathers in a positive, glorifying light, despite the fact that they had faults, including many of them being slave owners.

“Can we cancel Hamilton for glorifying our racist founding fathers and painting America as a good country,” one asked, according to the Daily Mail.

Another said, “Can’t believe Disney is showing a show about a slave trader in times like this. Also, the actors aren’t the same color as the people they are portraying. How dare they.”

“Are y’all ready to talk about how problematic Hamilton is?” posted another, according to The Daily Wire, “Lin Manuel Miranda created a piece of work that used hip hop (a genre created by Black people) to tell the story of colonizers and slave owners.”

But, Miranda makes it a point to both glorify and call out founding fathers, like Thomas Jefferson, in his musical, as well touch on the fact abolitionists were working to end slavery during the Revolutionary War.

“When you write a musical that brushes against sort of the origins of this country, it’s always going to be relevant,” he told NPR over the weekend. “The fights we had at the origin are the fights we’re still having. I’ve always said that slavery is the original sin of this country.”

It appears that these voices behind #CancelHamilton may be vocal minority and are unlikely to do much harm to Hamilton‘s legacy. Critics have already given the musical rave reviews, and according to Broadway.com, the show has grossed $650,000,000 in ticket sales since it opened in 2015. Also, over the Fourth of July weekend, the Disney+ app was reportedly downloaded over 513,323 times globally–266,084 just by Americans looking to watch Hamilton. That is a 72.4% increase over the past four weeks.

Disney has yet to release a comment on cancel culture’s latest campaign. The entertainment company acquired the distribution rights in the most expensive single-film deal in Hollywood history, and they released the musical in its entirety and censored only a few words to maintain a PG-13 rating.

Related: Disney+ to Debut ‘Hamilton’ Behind the Scenes Documentary

Have you watched Hamilton on Disney+ yet? What did you think? Let us know in the comments!