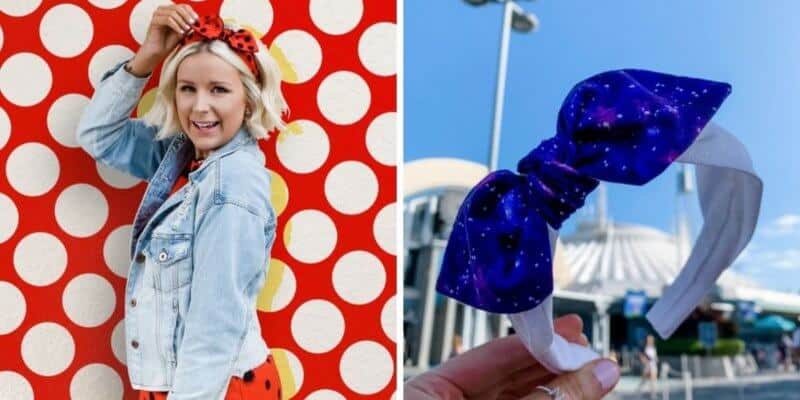 I am always looking for the perfect Disney accessory to wear when I am not visiting the theme parks and thanks to Bella Notte and Co., I am always covered!

Bella Notte and Co. is an online Disney shop that sells magical Disney accessories including BellaBows, BellaBands, T-shirts, and even items for your pups — all showcasing some of your favorite Disney movies, attractions, characters and more!

Emily and her husband, Tom, also known as @mainstreettraveler on Instagram, created their own online shop about 2 years ago in summer of 2018 but it wasn’t until the fall of 2018 that Bella Notte and Co. released the first line of their BowBands — which is what they call “BellaBows”. That is when they really drilled down and got into what they are most known for today!

Let’s Start at the Beginning!

Inside the Magic had the chance to interview Emily and learn more about her and Bella Notte and Co.! For starters, she is a huge Disney fan herself and as a Walt Disney World annual passholder living right behind the Magic Kingdom, she (and in her words) “selfishly gets to enjoy the fireworks every night”, which, in my opinion, is amazing!

She absolutely adores the theme parks and spending time within them whenever she can. Emily’s favorite thing is to take her time and appreciate the ambiance and atmosphere of it all, with her husband right by her side. But Emily really wanted to find a way to bring Disney into her everyday life.

Emily loves wearing Mickey ears when she is visiting Disney, but she wanted to try and find a way to incorporate Disney into her everyday attire while she wasn’t exploring the theme parks — That’s where Bella Notte and Co. comes in!

Since launching the initial BowBand line in Fall of 2018, Bella Notte and Co. really took off. In fact, Emily told us that they just recently hired their first employee. “I’d like to acknowledge our employee, Ryann,” she said. “It was really serendipitous when she came to us and I’m so glad she did! Her passion for Disney really shows through in her work and dedication to Bella Notte, and she’s really helped us the last couple months in growing our small shop into something larger.”

And, with the continued growth of the business, they have nearly outgrown their current workspace! “It’s become quite an operation,” Emily said, “and we’re really having fun with it.”

But Ryann isn’t the only one who Emily wanted to acknowledge. Her husband, Tom, has been her rock ever since the start. “My husband Tom is literally the yin to my yang,” Emily explained. “I’m more of the creator/dreamer and he’s the guy who’s usually left to make it happen (he manages all the marketing and tech side, while I make the products and create the vision). He’s also the one behind the ‘magic shots’ we post on our Instagram; I usually come to him with an idea and together we bring it to life, largely because of his editing!”

What inspired you to create your own Disney shop?

We first started our shop as a way to make and sell the things we wanted to wear –  which at the time was just a few t-shirt designs we had created. But then, we had to move from Florida out to Colorado due to a job change, and we missed the parks so much that we wanted to find a way to stay more connected to Disney while also meeting other people who loved it as much as we did.

Since being a Disney fan and going to the parks often, I loved to rep my Mickey Ears but I realized that the problem with Ears is that you’re only really wearing them in a theme park… Living in Colorado where you don’t see many people wearing Mickey Ears, I wanted a more subtle way to rock Disney accessories… In particular, something that you could wear both in the theme parks as well as outside of them (like in Colorado), as a nod to your favorite Disney character, movie, or park.

I bought a simple fabric-wrapped bowband from a local retail store, and had an idea: what if I took that concept, but used colors and fabrics that when combined together resembled an actual Disney character? (For example, for our “Donald” inspired bowband, we used a blue with white polka dot fabric for the band that plays into the blue from his outfit and white from his body, topped off with a yellow bow to represent his bill and feet.)

Ironically, when I first had the idea to create these kinds of bowbands, I had absolutely no idea how to sew… It was just an idea (and something different from anything I could find out there).  Fortunately, I have a mother-in-law who’s been a seamstress all her life. She came out to Colorado for a full week where we worked through the patterns and templates to get our design just right, and with some tweaking and refinements we created our first bowband prototype.

Since then, we’ve created over 200 unique styles ranging from movie and character inspired designs to parks, foods, holidays, and more.

Where did you come up with the name “Bella Notte”? Is it based off of Lady and the Tramp?

Oh man, there’s SO many layers to the name!

So first off, “Bella Notte” is Italian for beautiful night, which – as you guessed – is a direct nod to the song in Lady & The Tramp during the spaghetti scene. This hits close to home since we were married in the Italy Pavilion in EPCOT, and we have two dogs that are rescues… Bella is actually the name of one of them, so the name is a direct nod to her (although she can be a stinker at times!).

In addition, this name gives us a subtle connection to Disney, but with a direction we can really grow into in unique ways (we have plans on expanding into jewelry, more apparel, and other things in the near future).

Fun fact: One of the coolest things (in our opinion!) about the Bella Notte & Co logo is that it’s literally the silhouettes of our two dogs, Eddie and Bella. We had their silhouettes worked into a design stylized after the scene from Lady & The Tramp, but replaced the piece of spaghetti with a bowband 🙂

Which hairband design has been your favorite that you’ve created?

Honestly, my most favorite designs are the ones based on a character, using fabrics that represent the character so well that you know who it’s inspired off of without actually having the character on the design. For example, our “Sheriff” inspired by Woody from Toy Story, the “Donald” inspired by Donald Duck, and the “Sorcerer”, inspired by Sorcerer Mickey.

But, if I HAD to pick one as a favorite, I’d say the Sheriff. Not only is it super adorable and instantly recognizable, but that design was the initial inspiration for the character-based bowbands that kicked everything off.

Which hairband design would you say is your most popular?

To date, our most popular design is our Spaceship Earth bowband, followed very closely by our Ghost Host design (inspired by Haunted Mansion).

Lately, our collection inspired by shopDisney’s Minnie Mouse: The Main Attraction line has been a huge hit, too! Each month we release a special bowband to match the Minnie Ears from the collection, which people have been loving!

Bella Notte and Co. Gives Back

Emily and her husband also give back to the community as they recently donated to the BStrong Foundation! Emily said that she and her husband have known ever since the start that the two of them wanted to grow a business that helped them to give back and contribute to causes they believe in and help out where it is needed.

In fact, ever since the current pandemic outbreak, Emily said they have donated over $1,300 to the BStrong Foundation, providing masks and sanitation kits to healthcare workers in need. But this isn’t the first time Bella Notte and Co. has donated to BStrong as they helped provide disaster relief in the Bahamas after Hurricane Dorian.

“One thing we feel very strongly about is supporting animal shelters,” Emily shared. “It’s been a goal of ours to support animal shelters like the ones we adopted our two beautiful little pups from – shelters that are notoriously overbooked, under-staffed, and in need of assistance in any form.”

She continued, “Going forward, we’ll be rotating our donations to include animal shelters in need so we can contribute to that cause as we grow Bella Notte & Co – another significance of the tie to Lady & The Tramp!”

We did it you guys?!! ⠀ I can’t even believe it?…Because of your support from our most recent sale, we were able to raise $800 to donate to @bethennyfrankel #bstrong foundation! ⠀ If you don’t know much about it, Bethenny Frankel’s BStrong GEM is working directly with Global Empowerment Mission to create and distribute kits for health care workers and hospitals throughout the nation. ⠀ On top of that, they’re also disturbing thousands of hospital-grade masks and gowns nationwide! ⠀ If you want to hear more about this amazing mission and foundation, check the link in our bio… They are doing some really incredible things and helping so many people. ⠀ And again, thank you all so much for your love and ongoing support ?! In times like these when everything is so uncertain, it’s so wonderful to know how many amazing people there are out there just trying to help in any way they can. ⠀ Those are the things I choose to hold onto during this time and it just makes my heart so full… So thank you☺️! ⠀ stay HOME. stay SAFE. and stay AMAZING! ⠀ Love to you all ❤️! ⠀ #mainstreettraveler #smallshop #supportsmallbusiness #disneyshop #bstrong #donatetoday #dowhatwecan #smallshopbigheart #makingmagic #feelinggrateful #blessed #flattenthecurve #disneystrong

Now onto more personalized questions — Which park is your favorite?

EPCOT for sure! Like I said above, my husband and I were married in the Italy Pavilion in Epcot, so it holds a special place in our hearts…

Not only has it become our go-to park to bring friends and family, but I love how you can really set your own pace with walking around the World Showcase, enjoying delicious food and drinks as you go.

What is your favorite part about visiting the theme parks?

One of the things that I get most excited about is just being in the parks, taking my time and appreciating the ambiance and atmosphere of it all. With all the hustle of everyday life (especially with growing a very time-consuming business), I love being able to escape into a park and become totally immersed in it.

That’s one of the reasons I love EPCOT so much – you can really take your time and enjoy just strolling from country to country (and since it’s a circle, you can just keep going haha).

Don’t get me wrong, I definitely have my favorite attractions that I’ll ride any day – Big Thunder Mountain Railroad, Haunted Mansion, Flight of Passage, Slinky Dog… Just to name a few!

Do you have a favorite time of year to visit Walt Disney World?

What a tough one! I’d have to say Christmas time for sure, especially in the evenings. The parks just take on a whole life of their own with all the Christmas lights and decorations – it doesn’t get more magical than that!

I especially love to head into Hollywood Studios in the evening during Christmas time, grab a holiday beverage, and watch the Sunset Seasons Greetings projections on Tower of Terror as the snow falls.

If you would like to take a look at Bella Notte and Co. to see what they have to offer, you can check it out here.

Comments Off on Bella Notte and Co. Brings Disney Magic to Everyday Accessories