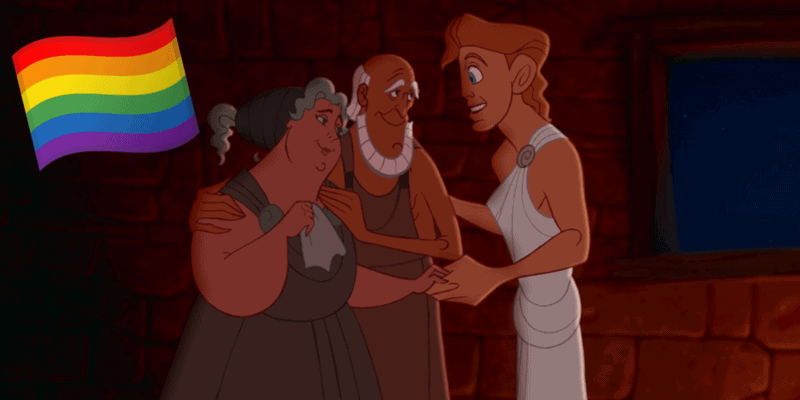 Diversity is becoming ever more present in Hollywood films, especially in Disney’s live-action remakes. From using Scarlet Johannson’s silky voice to subtly gender-swap Kaa in The Jungle Book to turning Josh Gad’s LaFou gay, and transforming Chiwetel Ejiofor’s Scar into a non-signing role (Yes, I’m still mad they took out “Be Prepared”), diversity in Disney films continues to grow. Especially when it comes to LGBT+ representation.

That increased representation has been slowly growing in Disney’s reboots and remakes on every level of Disney entertainment: Disney live-action remakes, Disney Channel, Pixar — even Star Wars and Marvel had their moments recently. But those moments have been judged as underwhelming and unsatisfying, simply a way for Disney to give itself a gold star for stamping a blip of diversity into its films.

Well, Disney’s upcoming remake of Hercules not only holds no exception to this push for diversity but it has the opportunity to provide the most satisfying moment of representation yet. Disney can and should make Hercules’s adoptive parents a gay couple.

The roles are perfect on matters of representation, story significance, higher-level meaning, and continuity.

Sure, Disney could try to make Hades’s hilarious henchmen, Pain and Panic, gay, or they could even try to make Hades himself gay. Or any other character. However, this move–like all the others–would be one made with controversy and red tape. I would argue that Hercules’s adoptive parents offer much more meaningful representation with almost none of the controversy or red tape as before.

In an earlier article, Inside the Magic shared how one of Disney’s story editors discussed the struggle of changing the sexual orientation of preexisting characters. But he rebuts my argument, pointing out that the “gay parents” trope has been an issue.

“I’m well aware that the “queer representation through parents and background characters” trope is an issue, and we’ve sort of stumbled backwards into a lot of heteronormative romances in this show due to legacy characters with pre-existing relationships…and how many specific hoops you have to jump through to make changes to established Disney characters (Again, please read my future book).

“We’ve done pretty well on racial diversity and representation of people with limb differences, but we really have not done enough relevant LGBTQ+ rep. We do have some themes and ideas coming up that address relevant LGBTQ+ narratives.But there’s always opportunity for a lot more; I don’t want a cop out and a cookie for saying “look at this one thing we did!”

In the case of Hercules, I would argue this issue of LGBT+ representation being relegated to parents and backstory is not there at all. In fact, I argue that it would be Disney’s most satisfying gay/lesbian role yet.

Herc’s adoptive parents aren’t just backstory fodder. They have a VERY significant and active role to play in the film. They are central characters for the entire first act of the original animated film, they are established and well-known in their society. Oh, and they literally rescue, adopt, and raise a literal god.

They are also honest with Herc, tell him who he is, and accept him for all of his abnormalities. In a world where gay adoption is still contested and debated, what better advocacy and endorsement for it could there be by making them caretakers and embodiment of unconditional love and support? Two awesome guys or girls adopt and raise the son of Zeus and the guy who ends up saving the world. And all the while, they are looked upon favorably by Zeus, Hera, and the gods of Mount Olympus.

Implementing gay parents in family films also provides the most impactful and inclusive form of representation. Parents–gay and straight–know how to best display their eros at Disney’s family-friendly level (yes, that means displays of affection like a kiss on the lips), but there is also, arguably, underlying ageism that can be used to their advantage.

Kids can’t tell parents what to do and kids know that parents can’t tell other parents what to do. Therefore, unlike “the rebellious gay kid in heteronormative suburbia,” when two gay parents appear on the scene, the relationship and lifestyle demand to be recognized by “uptight” Disney parents.

And just for good measure, that relationship is accepted and supported by all the gods and muses in the film. That, then, respectfully yet deliberately opens the door to further conversation on the matter that each family can take at their own pace. It also makes Hercules more relatable to kids who have been adopted and gives those kids who have been adopted by a gay couple their own Disney Hero.

There is also the matter of continuity both regarding the characters themselves as well as the world of the story. In the case of Hercules, the story arc of his parents will remain unchanged. Hercules falls from Olympus, becomes mortal, and the couple raises him through his 18th birthday. It is also widely accepted now that ancient Greece was much more pro-gay than our modern society and to see that recognition that they were accepted and Hercules was the outcast fits in that narrative.

It is safe to say that Disney is going to continue to add more LGBT+ representation into its future films, and Hercules is no exception. If you go back and watch Disney’s Hercules, you’ll notice his adoptive parents may say each other’s names once or twice at the most. To the common Disney fan, they’re nameless, yet they carry such an important role. That makes them the perfect to be reinvented and transformed into characters of their own that all will love and root for, and have names we will remember.

What do you think of this idea? Let us know in the comments!