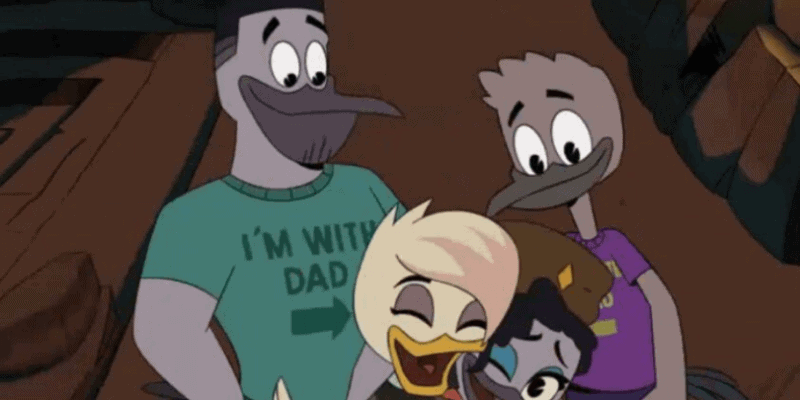 As season 3 of the DuckTales reboot finally premieres on DisneyXD, we have confirmation that the season’s premiere will feature the show’s first gay couple, albeit in a small yet very present role.

Webbie’s best friend Violet will introduce her two dads during the premiere when Huey has to compete against her and Lena in order to move up from Junior Woodchuck to Senior Woodchuck. And during the competition, Webby says a new favorite like “that’s my sister from a couple of misters.”

watched the new ducktales and !!! violet has gay dads!! pic.twitter.com/CNi38Is5dC

A step in the right direction for LGBT representation… Thank you so much, #DuckTales pic.twitter.com/0wVPLLm4zP

Now, viewers were still disappointed in the show of representation which drew a response from the show’s Co-executive producer and story editor Frank Angones. He called the moment a step in the right direction and told his audience to get ready for more.

“Want to be very up front and honest about this: Violet’s dads are present and show up but do not play a huge role in the story thus far. As with all of our characters, we had a lot of conversations about who Violet was and what her background was and came up with this fun notion of her too enthusiastic, overly supportive dads who love being dads.

“We didn’t really have a story built around them, but when the time came for an episode focusing on Huey and Violet in a particular situation, it made sense that they would be there (and it resulted in Matt Humphreys coming up with one of my favorite Lena lines ever).

“But I’m well aware that the “queer representation through parents and background characters” trope is an issue, and we’ve sort of stumbled backwards into a lot of heteronormative romances in this show due to legacy characters with pre-existing relationships (Scrooge and Goldie, Donald and Daisy, Fenton and Gandra) and how many specific hoops you have to jump through to make changes to established Disney characters (Again, please read my future book). But that’s really no excuse.

“We’ve done pretty well on racial diversity and representation of people with limb differences, but we really have not done enough relevant LGBTQ+ rep. We do have some themes and ideas coming up that address relevant LGBTQ+ narratives.But there’s always opportunity for a lot more; I don’t want a cop out and a cookie for saying “look at this one thing we did!”

“I know this response is a bit of a bummer, but I didn’t want to lead anyone on. But please believe, as I’ve said before, I’m dedicated to being better and finding new opportunities for three dimensional representation, on this show and the next and the next.”

So for those concerned about the show changing your classic and favorite characters, you can relax knowing they are secure. Donald will still be with Daisy. But like the introduction of Violet’s two dads, there is always another page for another chapter with new characters and new perspectives to be introduced. And that is a reason to be excited.