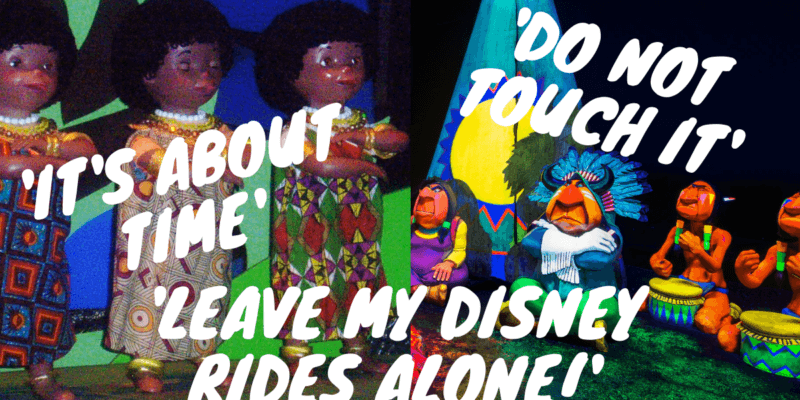 We recently shared a compelling rumor that Disney will be creating a Diversity Review Team to assess Disney theme parks rides and see if alterations are required to remove dated and problematic elements.

This rumor didn’t exactly come out of nowhere. Lucasfilm, Marvel Studios and Disney have all released videos or statements in support of the Black Lives Matter movement. Filmmakers like Star Wars director JJ Abrams and actor John Boyega have also been heavily involved, either financially or physically, or both. The Disney brand has been consistently vocal about its aim to create a diverse workforce of cast members while telling diverse stories on the screen. However, what about its theme parks and their attractions, rides, and shows?

When it comes to the theme parks, many argue that Disney needs to update its rides to ensure that they are inclusive of all who visit them. At the time of writing, the petition to re-theme Splash Mountain from the problematic Song of the South to The Princess and the Frog has nearly hit its 25,000 signature target, while a counter-petition has also gained significant support.

Disney fans are rightly and vocally passionate about their favorite theme parks and many of our followers took to Facebook to voice their concerns about what a Disney Diversity Review Team could mean for their local Disney park.

We mentioned that eight iconic Disney park rides could require re-imagineering should this rumor prove true. It’s a Small World and Peter Pan’s Flight were among the most controversial.

‘This is absolutely ridiculous. Leave my Disney rides ALONE!’

‘DO NOT TOUCH IT’S A SMALL WORLD!’

‘Small World racist? Uh how? The core of Neverland has plains natives…. carousel of progress, really? Come on now!’

‘The point of Small World is to celebrate the colorful, unique cultures around the world. It encourages unity and acceptance of all the world’s people. That is a message we all need right now, so I doubt Disney would change THAT ride. Now, Splash Mountain…’

‘I was told that if you don’t like the ride, you don’t have to go on it. Pretty common sense. Why ruin it for other people? Yes we need to learn from our past, but how can we learn from it, when it gets changed, hidden, or destroyed by people who think their values are better than other peoples’ values?’

‘What is wrong with some people? I feel like I’m living in an alternate universe. Leave Disney rides alone! Leave classic movies alone! What’s in the past is in the past. Geez! So fed up with this nonsense.’

However, some fans also saw the need to update the rides.

‘It’s interesting to me how Disney fans are so opposed to any change of any kind. They move one trashcan 6″ to the left, and people start screaming about how that’s their “favorite trash can” and “Walt wanted it there.” I am a big Disneyland fan. We go as a family usually once a year (and we don’t live in California). But there literally isn’t any ride in either park that I would be opposed on its face to changing. It’s nice to see new and different thinks or a familiar ride with new parts, aspects or theming. And certainly values of diversity and inclusion are good ideals to have in the parks. People need to calm down.’

‘Why are people so upset about the largest corporation in the world that’s supposed to speak to the whole world trying to become more sensitive to the needs of the whole world?’

Whatever your thoughts, it seems that Hollywood and the entertainment industry, on the whole, are changing in a big way. We wouldn’t be surprised if the Disney theme parks follow suit and the removal of potentially racist elements becomes just as important as the diversity of its cast members.

Disney already has a Chief Diversity Officer, but only time will tell if the theme parks Diversity Review Team is a work of fiction or not. If it isn’t, it’s a pretty safe bet that Splash Mountain and some of the other more dated rides will be the first to be changed.

What do you think? Should Disney rides, shows, and attractions be updated to remove more problematic elements from the past? Is diverse talent enough to bring Disney up to speed socially, especially with current calls for the entertainment industry to censor past racist stereotypes? Let us know in the comments below.