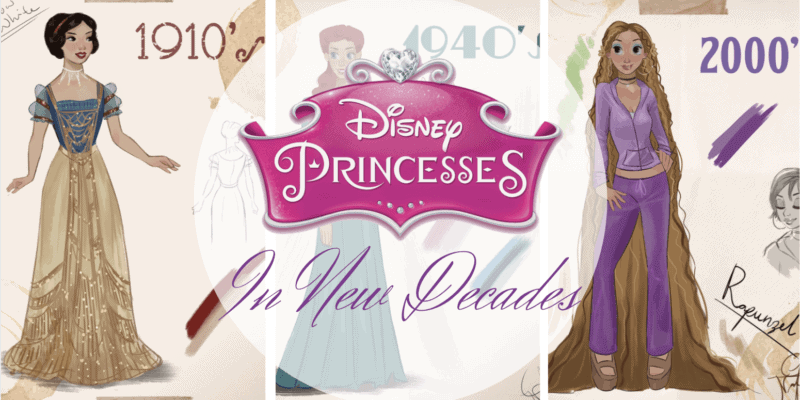 The Disney Princesses are some of the most iconic characters ever created. Because of this, fans connect to them on a deep level and often enjoy reimagining them in new situations and new eras.

Artist and Disney fan Amit Naftali, 20, is based in Israel and has enjoyed illustrating Disney characters since his childhood. Over the course of the past two years, Naftali has been working on a series that imagines what Disney Princesses would have worn if their movies had taken place in different decades than they actually did.

Naftali explained his inspiration for the Disney fan art series in an interview with Insider.com. He said he was “heavily inspired by the work of Steve Thompson [currently a principal designer for Disney Stores worldwide] , I remember seeing all of his beautiful illustrations and my mind caught on fire.”

Naftali worked through his Princesses-through-the-decades series in order of when each Disney Princess character’s movie released. First, he drew Snow White as if she had existed in the 1910s:

Next in Naftali’s collection is Aurora, who is pictured with both pink and blue 1930s evening gown color swatches:

In his Insider interview, Naftali discussed how important it was to him to keep each Princess’s iconic look alive in his reimaginings:

“I made sure to keep the general color scheme of the characters to give them a recognizable factor, and from there I was just having fun with different designs. If I had more than one design that I liked — an accessory, or another angle to the outfit — I wanted to include it in the piece too as a sketch in the background.”

In his 1940s Ariel sketch, for example, he included a pair of seashell earrings:

He said his favorite Princesses in the retro series are “a tie between Belle and Jasmine” and we see why! His version of 1950s Belle is truly stunning:

1960s Jasmine looks ready to take on the world with her sleek outfit and tiger-print handbag.

Naftali said of his Princess Jasmine rendition, “”So many people got so upset over the thought that Jasmine skinned Rajah to make her purse. Besides the fact that she is a cartoon character, no one actually thought of the option of it being a print, or even faux fur.”

Naftali’s 1970s version of Pocahontas completely fits with the Native American Disney Princess’s aesthetic. We can picture her walking down Haight Street in this outfit!

1980s Mulan is ready to rule the world with her shoulder pads and electric colored make-up.

We love both versions of 1990s Tiana. We can picture the hard-working Princess waiting tables on Bourbon Street in her casual 90s attire.

The last Disney Princess in Naftali’s series right now is 2000s Rapunzel, rocking what looks like a Juicy tracksuit (admit it, if you were a high school girl in the early aughts, you had at least one).

Naftali says he has the 2010s Princess sketched, so be on the lookout for more great vintage Princess artwork from the talented Disney fan artist!

What are your thoughts on this retro Disney Princess fan art? We love it and we would love to see Naftali’s take on Disney Prince characters too!