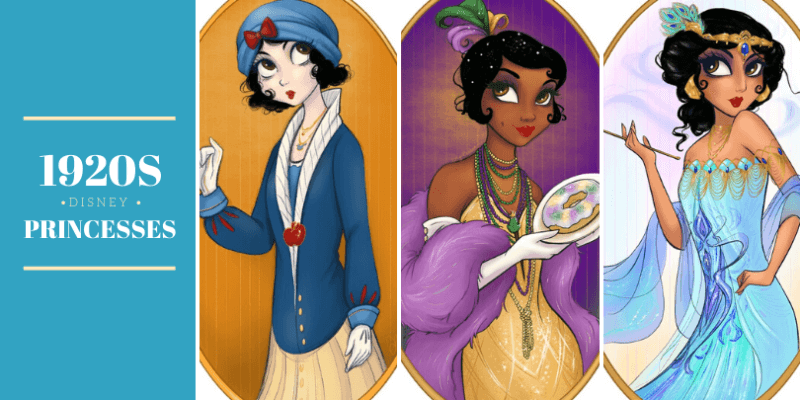 Reimagining Disney Princesses is something many artists enjoy. The characters play such a massive role in pop culture that it’s always fun to see them inserted into new roles and time periods. In some cases, women even transform themselves into the Princesses for a short time.

Illustrator Jacquelynn Harris kicked-off 2020 with a digital drawing of Snow White dressed in 1920s attire. The result is nothing short of fabulous! Snow wears a turban-style hat and an apple brooch, a nod to the 1937 animated feature’s poison apple.

Since her initial release of Disney’s first princess, Harris has gone onto add 11 more characters to her 1920s princess collection. Ariel has full flapper style, with a shell in her hair and a sash reminiscent of a mermaid’s tail.

Merida and Rapunzel, on the other hand, have both eschewed flapper style in favor of styles befitting their creative personalities. Princess Merida looks every inch the Roaring 20s activist, while short haired Rapunzel has a Downton Abbey aesthetic with her drop-waist dress and cloche hat.

Said Harris on her official Instagram, “With this series, I didn’t want to limit myself to just designing flapper dresses of all the girls. I feel like that’s been done before and I wanted to push the designs to still tell their story.” We think she absolutely succeeded!

Belle and Jasmine’s 1920s styles are two of our favorites, featuring a stunning reinvention of Princess Belle’s iconic yellow dress and a flapper Jasmine wearing a peacock-inspired frock. We can just imagine Princess Jasmine walking into a speakeasy in this ensemble!

Harris’s Jazz Age versions of Mulan and Tiana both stay true to the girls’ roots. A bobbed haired Mulan is decked out in a Chinese tunic and New Orleans local Tiana is wearing Mardi Gras colors, while holding a King Cake donut (the perfect accessory for our favorite baker!)

Last, but certainly not least, Harris digitally drew Frozen sisters Anna and Elsa in Mad Decade styles. The girls look exactly as they probably would have during the flapper age, with Anna even holding a cup of hot chocolate to keep her warm!

Which 1920s Disney Princess is your favorite? Tell us in the comments!