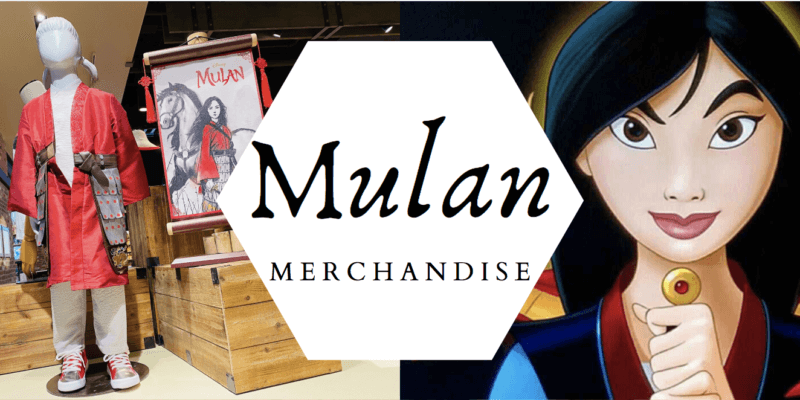 With the live action version of Mulan hitting theatres in just over two weeks, new merchandise promoting the film is being released faster than Mushu can break the great stone dragon. The World of Disney location at Disney Springs just debuted a new display featuring several awesome items.

Although there’s been no confirmation from the Downtown Disney World of Disney location, Disneyland park goers can probably expect to see a similar display in the near future!

The eye-catching display showcases clothing and dolls that pay tribute to the live reimagining of the ever-popular animated film. The dolls, modeled after Mulan actress Liu Yifei, come in beautiful packaging and would make the perfect gift for the little warrior princess in your life!

This girl’s ringer tee features a Mulan graphic drawn in a traditional Chinese style. It says “Loyal, Brave, True” in both English and Chinese. This cute top is a great reminder for little girls that they can be anything they want to be, just like Mulan!

For adults, Disney has released a distressed vintage Mulan sweatshirt. The bottom of the dark grey lightweight sweatshirt has a bleach-spattered look and it features bold red and gold accents. Depending on how it was styled, this live action Mulan hoodie could be worn by men or women.

This kids’ Mulan costume is an exact replica of the outfit the Chinese Disney princess wears in much of the upcoming film. It features a red robe, thick brown belt, and overlay with dragon accents. Your little one will look the part when they go see the new movie!

If you can’t get to Disney Springs to purchase all of the fabulous new live action Mulan merchandise, keep your eyes peeled at ShopDisney.com. A number of products, including the Two Reflections doll priced at $29.99 and the $79.99 deluxe Mulan costume are already available online.

Check out the release of the much-anticipated 2020 Mulan movie on March 27! And book a trip to Disney World to shop the Mulan merch in person.